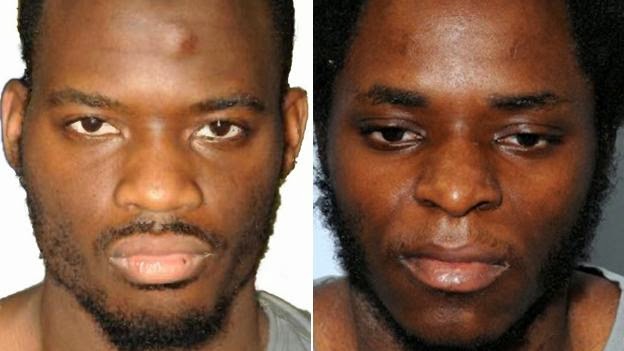 Michael Adebolajo and Michael Adebowale, the supposed murderers of Fusilier Lee Rigby, have been sentenced to Life imprisonment, see: http://www.bbc.co.uk/news/uk-26357007. This unfortunately means that Rigby's real killers are still walking the streets, possibly being trained for their next operation.
See here for essential background: http://hpanwo-radio.blogspot.co.uk/2013/07/programme-52-podcast-nick-kollerstrom.html.
And: http://hpanwo-tv.blogspot.co.uk/2013/05/woolwich-attack-and-mi5.html.
Initially undecided, I am now fairly certain of what I proposed in the above links; this whole case reeks of fabrication. This has divided the conspiratorial community like almost nothing else; I put an initial post on Facebook last night when the verdict was announced and it has cost me friends. Perhaps this is because of the Militarily Religious aspect to this event, and maybe in some ways Woolwich was a far more audacious scam that 9/11 and 7/7, simpler and with a far better-concocted official story. Along with his appearance on CMR, Nick Kollerstrom was also featured on Richplanet TV. After this interview was broadcast, Richard D Hall was served notice by the Showcase Channel that they were going to stop broadcasting his programme because of the "offensive nature of the content!", see: http://www.richplanet.net/pulled.php. I personally find the murder of innocent people followed by lies about how and why they were murdered offensive; if saying that loses me friends, so be it. The intention behind the slaying of Lee Rigby was to trigger a backlash and counter-backlash of even greater bloodshed, possibly even an all-out civil war in . I'm glad to say that this has not yet happened, but the manipulators will not give up. Sooner or later, they're going to try again. And we must be ready for them when they do.
Posted by Ben Emlyn-Jones at 07:50