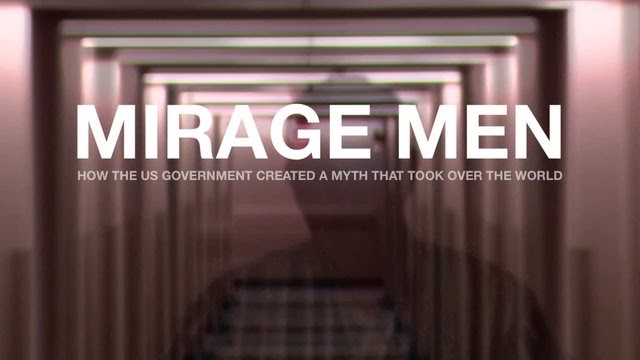 The film Mirage Men by John Lundberg and Mark Pilkington is currently available on YouTube; how long it will remain there I don't know, see:  (24/2/14- This link is now dead; it must have been an unauthorized upload and the producers don't want the film put on YouTube yet) See here for its official website: http://www.miragemen.com/. The film is based on Pilkington's book of the same title and I've written a full and detailed review here: http://hpanwo.blogspot.co.uk/2012/12/mirage-men-by-mark-pilkington.html. The movie has within it some information that is absent from the book and was not previously known to me. I didn't know that Richard Doty attempted to recruit Linda Moulton Howe; luckily Linda was far wilier than Bill Moore or Paul Bennwitz and didn't fall for it. The film also deals more thoroughly with the controversial Majestic 12 documents over which I'm presently undecided, see: http://www.majesticdocuments.com/. It also includes a case that the Project Serpo incident was the creation of Doty, see: http://www.serpo.org/. I've never found this story very credible and this doesn't surprise me. At the end of the film "special thanks" is given to Jon Ronson, a man who has been involved in what I consider to be some very questionable media works, see: http://hpanwo-voice.blogspot.co.uk/2013/04/jim-tucker-dies.html and: http://hpanwo-voice.blogspot.co.uk/2012/10/david-icke-from-wogan-to-wembley.html. As I explain in full in the book review, I disagree with most of its conclusions; I think the film makers are dealing with an elaborate double-bluff that they haven't got to grips with. The movie however is well worth watching.
Posted by Ben Emlyn-Jones at 20:57