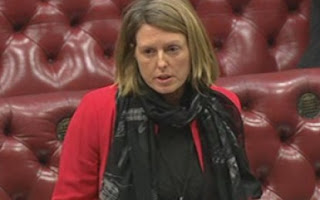 Baroness Worthington is a veteran environmental campaigner who has worked for various charities including Friends of the Earth. Earlier in the month she was appointed shadow energy minister. Then she astounded and dismayed several of her fellow environmentalists by publicly declaring her support for fracking. She has not done so without qualification and insists that the introduction of it must be conditional, but she no longer sees fracking as the unequivocal danger that many others, including myself, do. She urges her fellow greens to "think again" and "keep a cool head". Her reasons for her position are very predictable; she says: "We have the mother of all challenges- getting emissions of greenhouse gases out of our energy system. Environmentalists should not be adopting a priori objections to technologies but appraising them... We have to be realistic. We are going to be using gas for a long time because of the huge role it plays for heating homes and for industry. The important thing is to minimize the carbon emissions from gas. That means if we can get our own fracked gas, it's better to use that than importing gas that's been compressed at great energy cost somewhere else." Baroness Worthington is taking a softer line than some of the other "new greens". She will not back fracking unless it's accompanied by "CCS- carbon capture and storage". This is a system where carbon dioxide gas, or Carbon™ as it is known today, is removed from the exhaust of fossil fuel-burning appliances and prevented from entering the atmosphere. There are various ways to do this; the Carbon™ can be put into chemical compounds for industry and agriculture or buried underground in old mines, bonded chemically to certain kinds of rock, or in depleted oil wells. Some of her peers are not so contemplative over fracking and are saying nothing except "full steam ahead!" This is because shale gas has comparatively low Carbon™ emissions compared to other fossil fuels. Already the power generation infrastructure in is being shifted from coal to gas; we've seen this at Didcot Power Station. Didcot A has been demolished and replaced by a gas-fired plant, see: https://www.youtube.com/watch?v=wpZqN-orAjk. Currently all of this gas is being imported from the , therefore Ms Worthington thinks we should instead be exploiting our own gas deposits. Most of her peers in Friends of the Earth and the Green Party oppose anything except a single stage transformation in energy generation from fossil fuels to renewables. Craig Bennett of FoE said: "Fracking won't help us tackle climate change. Even people in the industry agree that shale gas wouldn't make any big difference to our energy sector until the mid-to-late 2020's, which is exactly when the needs to start getting out of gas, wherever it comes from. Building a whole new gas infrastructure will keep us addicted to expensive fossil fuels for decades to come." (Source: http://www.bbc.co.uk/news/science-environment-34191713)

And how does Ms Worthington reach her conclusion that environmentalists have made 'a priori' assumptions, pray tell? In my experience, most campaigners on any issue have carried out very thorough research and considered every side of the equation, far beyond what the main stream media have tried to inform them, before sticking their head above the parapet.
I wonder why Ms. Worthington has failed to address the issues associated with potential damage to our natural aquifers that are inherent in the fracking process. Surely, as a 'veteran campaigner on environmental issues', this should be fundamental and beyond her concerns with regard to Carbon balances?
I am always concerned that those within the political establishment and who have connections to major charities may have vested interests.
Just as you suggest, Ben, a rear-guard action may be being fought here, and the days of the likes of Ms Worthington may be numbered. Nevertheless, it is essential that the falsity of these folk is exposed to the wider populace wherever we can.

Neil, the green stance against fracking is perfectly reasonable. Ms W's stance is a product of cognitive dissonance and terror. As Goebbels said: "The bigger the lie, the more likely people will believe it!"