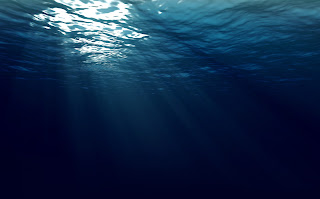 The "Bloop" is the onomatopoeic name given to a strange sound picked up by underwater microphones, known as hydrophones, in 1997. NOAA- the National Oceanic and Atmospheric Administration, an American scientific agency, has set up hydrophones in many seas of the world to listen to the sounds of the ocean. Some of these were originally called the Sound Surveillance System- SOSUS and had a military purpose; they were used by NATO to detect Soviet submarines and ships traversing designated regions of the sea. These hydrophones are very sensitive and have discovered that the oceans are in fact a very noisy place, even if that noise is of a kind we humans can't hear. Along with artificial noise of ships and underwater explosions, are the singing of whales, and other much louder sounds. Most of these can be identified as earthquakes on the seabed and impacts from icebergs. Then one day in 1997 (oddly enough I can't find a source pinpointing the exact date) a sound was detected that nobody recognized. It was at a very low frequency; it rose from nothing to just fifty hertz over the course of about a minute, and then vanished. What was remarkable about it was its volume, at least three hundred decibels, several times as loud as a whale singing at the top of its voice. The recording of the Bloop has to be sped up many times to make the sound audible to human ears, see: https://www.youtube.com/watch?v=OBN56wL35IQ. It was heard by two separate listening stations over three thousand miles apart and comparing both their bearings the noise was roughly triangulated. It was thought to be in a spot in the deep about four hundred miles west of the tip of . After some consideration NOAA claimed that they'd solved the mystery; it was the sound of icebergs colliding. However another scientist, David Wolman, reckoned that it was still animal related, but what kind of animal? It was too loud to be a whale. The Bloop has never recurred since. What nobody denies is that the ocean still hides a vast array of mysteries. In many ways, we know more about outer space than we do about the watery envelope covering almost three quarters of the Earth's surface. Over 99% of the ocean floor remains completely unexplored. NOAA have picked up other enigmatic and inexplicable sounds since the Bloop which they'd christened "Upsweep", "Whistle", "Julia", "Slow Down" and "Train".

Several fiction writers have wondered what lies beneath. The most famous of these was HP Lovecraft who wrote a story published in a pulp fiction magazine in 1926 called The Call of Cthulhu. It was all about a submerged city originating in a mysterious otherworld that acts as a prison for a horrific sea monster called Cthulhu which was a gigantic reptilian winged humanoid with octopus-like tentacles emerging from its face. Strangely enough Cthulhu's city, R'lyeh, was said to stand on the seabed less than a thousand miles from where the Bloop was vaguely estimated to have broken out. Lovecraft's story inspired Robert Shea and Robert Anton Wilson when they wrote my favourite novel, The Illuminatus! Trilogy. Naturally the Bloop is fact and Lovecraft's story is fiction, but how often before has life imitated art? I can think of numerous examples. Perhaps fiction writers tap into some kind of psychic resonance which inspires them to write stories that closely match real events in ways that cannot be dismissed with that skeptic Joker: just a "coh-inss-i-dunce!" The 1989 James Cameron film The Abyss also explores the possibility of deep sea non-human civilization. Cameron himself descended to the Challenger Deep, the deepest place in the world's oceans, in a deep-sea mini-submarine; why would he do that if all he invented was fictional? It has been known for some time that the oceans contain natural deep sound channels in which sound waves are focused and concentrated into beams. These beams carry the sound much further and for far longer than a normal sonic medium. Some people claim depth charge detonations for the 1940's of the Atlantic still to this day resonate around the world in these deep sound channels. Similar sound channels have been discovered in the upper atmosphere which is why Project Mogul was launched in 1947. This was a top secret operation to listen for Soviet nuclear bomb tests by hoisting microphones into the upper atmosphere on giant balloons. Project Mogul has been falsely claimed to be the explanation for the Roswell Incident. This article explains why that is incorrect, but also has information on deep sound channels, see: http://hpanwo.blogspot.co.uk/2007/12/roswell-no-aliens-just-sound-waves.html. The Bloop has also played a role in the Animal Planet TV mockumentaries Mermaids- the Body Found and Mermaids- the New Evidence, see: https://www.youtube.com/watch?v=dWE4g33dwdI and: https://www.youtube.com/watch?v=OVhYo41FOY8. When I first saw these programmes I did wonder if they could be true stories. Now I'm 95% certain they are indeed completely faked, but I still think there's some genuine reason why these programmes were made. I'll have to write a dedicated post about this subject to explain properly. Could there be some kind of... something... deep in the liquid depths of our planet's hydrosphere that is beyond anything we have yet imagined? At the moment our telescopes are pointed up at the heavens, waiting for a sign of intelligent life from out there. The "WOW! Signal" could be one such call, see: https://www.youtube.com/watch?v=F4EyZt9r8QE. Perhaps we should not only be looking upwards; we should also look down. Was the Bloop an undersea equivalent of the "WOW! Signal"?
Posted by Ben Emlyn-Jones at 18:23

Anonymous said...
This comment has been removed by a blog administrator.
4 September 2015 at 20:28

Dear Ben. First time id heard about this, thanks for sharing. I am of the persuasion of the conveniently entitled 'Expanding Earth' theory insomuch as all theory points toward an indescribable process intimately connected to the conscious mind and it's inverted flux. Perhaps it may have something to do with this esoteric momentum of the indescribable infinite. That being said it is interesting that many cultures hold deities associated with the deep, H.P Lovecraft envisioned an entity called 'Cthulhu' and is a an archaic deity or ancient one created by writer among many cosmic intelligent cosmologies. Or - perhaps - it is as simple as some underground sub-aquatic base power source...............Imagination again, please forgive me!. Interesting Ben

Hi X. You're welcome. I'm fascinated by deep sea mysteries and will be writing in more detail about mermaids soon. I've looked into the expanding earth hypothesis and it makes a lot of sense. The question is, if the earth is getting bigger what is it filling up with? Lovecraft was similar to Tolkien in that he managed to tap in psychically to the deepest currents of the collective usubconscious mind. His works were loaded with archetypes.

Dear Ben. Yes - Lovecraft was very similar to Tolkien, Ive only had a pedestrian scan of his work (including Tolkien) but both are interesting. In terms of the expanding Earth theory, I would hasten to interpret it through common scientific archetypes as as you know science is developing in some quarters to include zero point energy, unusual quantem theory and even what was deemed as esoteric concepts. There is much talk of 'Expanding Consciousness' which can be a simplistic and missleading new-age concept and I feel this may be true of the expanding earth theory, insomuch, as what we term filling-up may not relate to perceptable-physical matter as we know it. I remember a Japanese Cosmonaut describing space as not Black in empirical terms but as staring into a Black-Active-Hole. As usual, much to ponder over Ben. Cheers