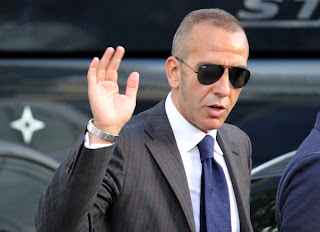 Football is a sport in which controversy is daily business, however several incidents have stood out from the everyday shenanigans as worthy of HPANWO-esque note. Here's one that I reported on a while ago: http://hpanwo-voice.blogspot.co.uk/2014/06/is-luis-suarez-zombie.html; another happened several years earlier, but it has never been justly resolved. Paolo Di Canio was one of the world's top football players; originally signed up with Lazio in 1985 he appeared for ten other clubs across and also his national team, . Like many characters in the beautiful game, he has a hot-headed personality and a short temper, but he was renowned for his skill, daring and endurance on the pitch. Also traditionally for a footballer, he became a team manager after the end of his on-pitch career, however it was in March 2013 when he was shortlisted to coach Sunderland that a new and very unusual dispute broke out. Di Canio had previously published an autobiographical book in which he expressed his admiration for Benito Mussolini. Mussolini is an almost unknown historical figure outside his native , but is one of the country's most prominent political movers. He ruled as a one-party dictator of the country from 1925 until his ousting and assassination in 1945. He was known as Il Duce, "the leader". as a single nation is comparatively a very new one, see: http://hpanwo-voice.blogspot.co.uk/2014/04/freedom-for-venice.html, and Mussolini wanted to consolidate it into an aggressive and nationalistic new form that employed many of the two thousand year old vestiges of the . under his leadership was tightly controlled and the media was completely hooked to his propaganda. He made life hard for many people and sometimes violently crushed his political enemies. His regime was destroyed by the Allied invasion of in the endgame of World War II. He was captured by communist rebels who killed him and hung his body upside down on the forecourt of an Esso garage in . Paolo Di Canio describes Benito Mussolini as "basically a very principled and ethical individual... He has been deeply misunderstood by history." Di Canio also used to give a Roman victory salute during his Lazio days when he scored a goal, just like Mussolini used to. He received a fine and one-match ban for that. Ironically Mussolini himself had been a die-hard Lazio supporter. The problem is that Benito Mussolini was a "fascist". I put that word in quotes because it's very hard to define and is normally just used as a term of abuse. I myself have been called a "fascist" a few times, for example see: http://hpanwo-voice.blogspot.co.uk/2015/02/marine-le-pen-at-oxford-union.html. It is basically a generic dysphemism for anybody political left-wingers don't like, for whatever reason. You'll normally hear it pronounced "fathitht!" and have it spat at you by some scruffy, malodourous student carrying a placard. This happened to David Icke when he went to , see: http://hpanwo-voice.blogspot.co.uk/2015/03/david-icke-loses-lawsuit.html. I would never describe myself as a "fascist!", whatever you think the word means, and feel offended by the people who call me that.

The response to Paolo Di Canio's appointment to the bench was outrage. Several trade unions pulled out of their sponsorship deals and had their placards removed from the Stadium of Light, the club's ground (The GMB was one of them, which could mean that they might not be an effective alternative to UNISON for striking hospital porters after all, see: http://hpanwo-hpwa.blogspot.co.uk/2015/08/jr-porters-strike-update-2.html) The Durham Miners Association also disaffiliated from the club. The vice-chairman resigned immediately; this was David Miliband, brother of the Labour Party Fabian Boy Wonder Ed Miliband. Some fans set up a Facebook group with four thousand members accusing him of racism and demanding his immediate dismissal. This is despite the fact that his bad behaviour has so far been exclusively of the usual football stars' kind; there is not one reported complaint of any racist behaviour made by any player, fellow manager or fan against Di Canio. Therefore his is completely and totally a thoughtcrime in every sense of the word. He is being persecuted for having a particular opinion; that's all. This makes him somewhat similar to me because when I was dismissed from hospital portering I was told that I held views that "called into question my ability to perform my duties without prejudice." This was alleged to be racism because of my Microchip a Muslim Day video which is actually a comedy satire about propaganda related to the agenda by the state to insert electronic implants into people, see: http://hpanwo-tv.blogspot.co.uk/2010/09/microchip-muslim-day.html. What's more, like Di Canio, I had never had any trouble performing my duties without prejudice in the previous twenty-three years I'd been portering at the hospital. I'm actually very opposed to racism of any kind, and I've never behaved in such a way to anybody in the NHS workforce, which is famous for being highly cosmopolitan, see here for more details: http://hpanwo.blogspot.co.uk/2012/01/how-i-became-ex-hospital-porter.html. We're entering a dangerous age if somebody can be persecuted in the workplace because of beliefs they think of, regardless of whether or not they act on those beliefs. The way Di Canio was spoken about in the media was very worrying; there was little difference in tone between the actual reports and the ones that might have been written if he had in fact racially abused a black or Jewish player etc, see: https://www.youtube.com/watch?v=aiDxtnY2bF0. Paolo Di Canio and I are not alone in that respect. In 2014 a witch-hunt was organized against Brendan Eich, the CEO of Mozilla. Eich is one of the pioneers of the modern computer age; he invented JavaScript, the programming language that allows you to read these words on this webpage. Despite his lofty and revered position in the electronics industry and the history of information technology, his career was ruined instantly and without mercy. Why? Because he donated $US 1000 six years previously to a campaign group opposing gay marriage, see: http://abcnews.go.com/Business/mozilla-ceo-resigns-calif-gay-marriage-ban-campaign/story?id=23181711. This money was donated from his private purse, not from the company's money, and he did it in his own time. Also he never exhibited any misconduct in the workplace towards homosexual staff members. However that didn't matter and he was destroyed overnight. This is why I've become an opponent of Peter Tatchell, a former colleague of mine on The People's Voice; this is despite the fact that I agree with him over gay marriage. I don't know specifically, but I suspect that he would support the sacking of Brendan Eich, see: http://hpanwo-voice.blogspot.co.uk/2015/06/gay-marriage-usa.html. Andy Nowicki is another good example, see background article at the bottom. I don't know Paolo Di Canio; I've never met him, but if I did I'd ask him to elaborate on what he said. If Benito Mussolini is misunderstood by history, then in what way? I bet that most of the people who attacked Di Canio don't know anything about Mussolini except that he's a "fascist!" and therefore an "evil person!". Shouldn't Di Canio's statement instead be a trigger for intellectual discourse that might make us think again? One of the definitions of fascism is that it was an international political movement that doesn't exist anywhere in the world today; it rose and fell in the first half of the 20th century. It was set up as an attempt to halt the spread of communism across following the Bolshevik Revolution in . Unlike his wartime ally Adolf Hitler, Mussolini did not blame everything on the Jews, and until 1938 Jews were not prohibited from appointments to public office in . What's more the ban was only due to the influence of some of his ministers and the need for German support as war approached. He also improved the Italian economy enormously, opening state-run farms and factories all over the new nation. He created millions of jobs, and built roads and railways across the land. Also, amazingly, he was the first government leader to establish an official UFO investigation agency, decades before Nick Pope's MoD UFO desk (Good 2006). I'm not saying that Mussolini was a good man, or a bad man. I'm just saying that there are different ways of looking at history; and history has a habit of creating fictional angels and demons out of perfectly ordinary mortal people; people with the same human virtues and flaws as everybody else. However, we, the people are not permitted to think more than one-dimensionally in today's world. Despite all the pressure to reject him, Paolo Di Canio was signed up for a two-season contact at ; the club bravely resisted the edicts from the Ministry of Truth. However he was sacked after just a couple of months. This was not due to him being "Nazi fascist scum!", but because the team only won three games out of the thirteen they played under his management.
See here for more information: http://hpanwo-voice.blogspot.co.uk/2014/05/andy-nowicki-thought-criminal.html.
Posted by Ben Emlyn-Jones at 18:01


This is a good piece. The only thing I would take issue with is your ambivalence on 'equal marriage'
or whatever it is called. This is a veritable Trojan horse, when in reality the agenda is the
redefinition of the family (as happened in Éire recently) and thereby the systematic dismantling of the Christian institution
of Marriage, an institution that has more than sustained Christendom for two millenia. May I suggest, in this respect,
a perusal of the publication, 'Alive!', which does inter alia a very good job of discerning this issue (NWO,
cultural Marxism, and the MMS/Establishment agenda diected towards indigenous populations).

To be found at the following site:

Apropos nothing, is there a particular reason you use the page background/text colour combination
that you do? Personally, I find it burns an image on my retina. As you reference Eich, below is
javascript code that should give black lettering on a white background :)