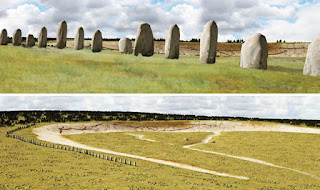 A few weeks ago I reported on the discovery of a new Neolithic site in , see: http://hpanwo-voice.blogspot.co.uk/2015/07/another-super-stonehenge-discovered.html. Now another has been found. This time the structure is at the long-known existing . This is a contemporary project to and it lies a few miles away between the modern villages of Amesbury and Larkhill. It consists of a circular raised bank some 1600 feet across and inside was a settlement where a large community of people lived, maybe 's builders. The place was not occupied for more than about fifty years so that could explain it. Now new research has revealed that a row of about a hundred standing stones had been placed along one side of the bank. These are significant stones too, very similar to those at Avebury and ; it would have required a lot of effort to move and erect them. Some are fifteen feet tall and so would have weighed many tons. Only about half the stones are there now and they've been found by a ground-penetrating radar survey. They're only about three feet below the surface and have lain there unknown for four and a half thousand years, see: http://www.bbc.co.uk/news/uk-england-wiltshire-34156673. Two things interest me especially about this discovery. Firstly it seems unlikely that this row of stones would have been put there for practical purposes. If, for example, it were necessary to construct fortifications because of a war with a neighbouring tribe or to keep wolves away from their livestock, then a simpler and more easily constructed wooden stockade would surely suffice. Did Durrington Walls for some reason combine the roles of residence and ritual temple? Or perhaps the village was home to the builders, as I said, and that the site was later finished and "consecrated" after the builders moved out. The second interesting fact is the burial of the stones. British megalithic sites have suffered from vandalism during the passing ages since they were built, especially in the medieval period. Some of the stones were taken away and broken up for building. Some were toppled over and buried where they lay, especially during times of Christian fundamentalism, when they were regarded as works of the Devil and associated with witchcraft. We can thank the antiquarian William Stukeley for preserving Avebury and many other ancient sacred sites as well as they have been. In the 17th and 18th century he waged a passionate campaign to protect our country's most archaic heritage. What's different about the stones at Durrington Walls is that they were pulled down and buried far earlier, in fact not long after they were put upright. Why? And by Whom? I don't see how we can find out. However actions like these are not entirely without precedent. Another indigenous culture existed on in the . Unlike Durrington Walls, was shielded from the Illuminati occupation of the world by geography instead of time. It is one of the remotest islands in the world, over two thousand miles from continental land. When it was discovered by a Dutch explorer in 1722, the visitors were astonished to find amazing statues all over the island, the famous Moai. Some of these had been deliberately toppled and broken into fragments. This desecration coincided with a terrible famine and civil war on the island. Were the statues those of gods whom the people blamed for their misfortune and turned against? One thing is clear; the ancient world was so complex and rich in knowledge. That world is forever separated from our own by the passing of the ages and the drive to centralize culture. Finds like Durrington Walls offer us a teasing hint at what really existed. I wonder what other treasures lie beneath our feet that we have yet to find.
See here for background: http://hpanwo-tv.blogspot.co.uk/2010/04/oxford-henge.html.
And: http://hpanwo.blogspot.co.uk/2008/06/now-thats-weird-conference-2008.html.
And: http://hpanwo-tv.blogspot.co.uk/2013/05/big-stones.html.
Posted by Ben Emlyn-Jones at 18:13

"What's different about the stones at Durrington Walls is that they were pulled down and buried far earlier, in fact not long after they were put upright. Why? And by Whom? I don't see how we can find out."

Is it possible that Stonehenge was Neolithic big business? Stonehenge has been proven to have attracted wealthy invalids from across Europe in a bid to obtain healing from the mystical stones. The stones would have been erected by enterprising locals who recognised the potential of the vast structures out of kilter with the landscape in a world without hospitals, crude surgery, and high early mortality.

As evidence for the big business possibility, for example, it has been proven that local thieves would attempt to get samples of the megaliths, possibly for the lucrative resale value of potent healing properties emanating from rock samples, only to be shot dead by Neolithic security guards.

If Stonehenge were seen as a sort of cross between Mecca and Disneyland, controlled and owned by Donald Trump with security by the Los Angeles police, then all trace of the henge builders would need to be obliterated in order to maintain the illusion.

Hi Laurence. That's interesting information, thanks. I know there was international trade in those days. The Orme Head mine was doing particularly well, exporting its copper all over the known world. I've a feeling there is a book somewhere in the Vatican library with all the accounts of the Stonehenge equivalent of the Lourdes Hospitality

I am glad that you used the Lourdes analogy Ben. I was thinking of doing so myself but decided against it in case of giving the unintentional offence of comparing Lourdes to a spiritual Disneyland when in reality Lourdes is, IMO, a genuine manifestation of God on Earth.

While on the subject, it is my opinion that Marian apparitions should be taken seriously by Ufologists, if only as evidence of extra-terrestrial contact rather than from a spiritual basis. Furthermore, there is a huge body ready-made research and personal accounts that could be drawn from, the most famous of which are the Fatima Apparitions of 1913, a mass sighting where the "sun" was seen to change colour and dance across the sky and Our Lady of Guadalupe, where the image of a divine being, if you will, was imprinted on a cloth that has, miraculously, remained untarnished to this day, contrary to scientific explanation.