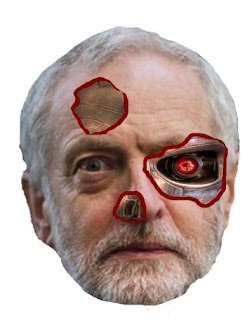 The inevitable, and the impossible, has happened. Jeremy Corbyn, after thirty-two years on the back benches of the House of Commons has become leader of the Labour Party. He is part of the tendency in the party of traditional economic socialists now considered tamed and outmoded, part of Labour's past. As I've explained before, the Labour Party completely transformed during the 1980's and 90's. After a series of election defeats to the Conservatives, they decided to abandon traditional left wing ideals and become a much more moderate, centre-left, social democratic party. They changed their logo from the red flag to the red rose and adopted the slogan: "Meet the challenge- make the change" at one of their national conferences. Margaret Thatcher, who led the Conservatives through most of this period, quipped that the greatest triumph of her career was her conquest of the Labour Party. Some in the party opposed this change. They wanted the party to stick to its founding principles and persevere in persuading the electorate that these principles were the correct ones. The foremost figure in this tendency was the party's former chairman and minister for energy Tony Benn, see: http://hpanwo-voice.blogspot.co.uk/2014/03/tony-benn-dies.html. One of his supporters was a newly-elected back bench MP for the constituency of Islington North called Jeremy Corbyn.
See here for essential background: http://hpanwo-voice.blogspot.co.uk/2015/08/jeremy-corbyn-new-labour-leader.html. 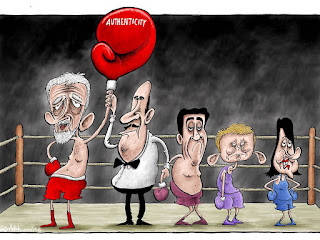 Those of the Blairite New Labour former leadership are shaking their heads and gasping in disbelief. How could this have happened? Right up the last minute many of them were still in denial. Tony Blair broke his corporate complicit silence to show genuine emotion for the first time in his career and rant about how the Labour Party was doomed forever to the depths of hell if Corbyn were made leader. This was probably counterproductive and sealed the fate of the other three candidates. In truth, there has always been a popular "old Labour" streak within the grass roots of the party. While I was a rabid teenage trade unionist many people in were involved with Trotskyism, centred around the The Militant. If you had walked through in those days you would often see a bushy-haired callow youth selling that newspaper on a street corner; that was me. Some of my social media friends are Blairite Labour-supporters and they're lamenting Corbyn's triumph in a similar way to their mentor. Tableaux of mock gravestones with "RIP Labour Party- 1900 to 2015" have been doing the rounds on Facebook. Maybe the real reason this revolution has happened is because there is simply no credible role for New Labour any more. The best analysis of the Corbyn victory has come from the paleoconservative journalist Peter Hitchens. He explains very persuasively how the New Labour Project was adopted and mimicked so completely by the 2000's Conservative Party that there was simply no need for it in Labour any more. Cameron is almost a face-transplanted Tony Blair when it comes to our continued membership of the EU, foreign constabulary wars, NHS privatization and many other policies, see: https://www.youtube.com/watch?v=tTu3gVvm_K8. Yesterday I was talking to a portering friend of mine who is a die-hard Thatcherite Tory and he said: "Labour have lost it! They've gone back to the Stone Age and elected a dinosaur!" I don't think it's as simple as that. The classic left failed in the 80's because they were up against another ideological visionary- Margaret Thatcher. Today the Corbynnies have simply to knock over David Cameron, and that's a completely different kettle of fish. As Hitchens says above, Cameron does not stand for anything; he is neither left wing nor right wing, neither authoritarian nor libertarian, neither conservative nor liberal. He is a political prostitute. I personally do not share a lot of Corbyn's political views, but if I had been eligible I'd have voted for him without hesitation; see the background link above for more details. I wonder how many of the people who support Corbyn have not really rediscovered socialism, and are instead, like me, just sick of the monotonous, dismal, insincere status quo? British politics has suddenly become so much less boring! Viewing figures for Question Time and Parliament Today are going to skyrocket. It's a recurring situation in politics; an organization has to choose between pragmatism and idealism. In 2010 the Liberal Democrats decided to be pragmatic. They sacrificed some of their principles in exchange for being a junior partner in a crooked coalition with the Tories. This has destroyed them; they've lost almost all their MP's and their members are deserting the sinking ship like the proverbial rats. I've always been an idealist and I respect other idealists, even if I don't necessarily share their ideals. Right now Jeremy Corbyn is reorganizing the party, which will be a big job and we're going to see a lot of changes. He has made the brave and admirable step of not deliberately making his deputy leader a woman, and therefore is rebelling against the Liz Kendalls of this world. His deputy, Tom Watson, looks like a middle-aged Harry Potter. He has said dismissively: "Any shadow cabinet members who resign can easily be replaced." This is following the eight front-benchers who have refused to serve under Corbyn. David Cameron has Tweeted: "The Labour Party is now a threat to our national security, our economic security and your family's security."... This is going to be fun! I'm surprised that none of my many detractors have spotted my mistake in the background article above. Normally these people spend all day scouring every word I write in order to pick out my errors. I wrote: "Jeremy Corbyn is never going to be Labour leader. The 'men in grey suits' would not permit it in a million years. Something will happen that will change the opinion polls and knock Corbyn off his perch. This could be a sex scandal, an accusation of financial misdeeds. Perhaps another kind of incident whose name will have the suffix '-gate'. Then again he might just do a Robin Cook/John Smith and have a convenient heart attack. Maybe he will suddenly commit suicide for no reason like Dr David Kelly. I would at least recommend him to stay well away from for the next few weeks." I was wrong; Jeremy Corbyn is now the Labour leader. But for how long? For goodness sake, the man could be Prime Minster within five years and he's a member of the Palestinian Solidarity Campaign!... I don't think so, see: https://www.youtube.com/watch?v=B8Uot_r59N4. Mossad are mixing the poison as we speak... Fancy a walk in the woods, Jeremy?
Posted by Ben Emlyn-Jones at 14:23

The closet Tories of New Labour, the system servers and suckers that make up the majority of Westminster and its posses fail abysmally to read the mood of what they refer to as the great un-washed (I won't say un-brain-washed). Corbyn hasn't. The have's are massively out-numbered by the have-nots and every-day battlers...and even the have's are realising their comfortable lives are wobbling under the status quo. This new J.C. does represent hope. I don't think he's another Tony Benn or Nye Bevan but if he does stick to his guns with re-claiming what has been stolen from us (a very long list) he's walking towards trying on those giants' shoes. We'll see...but whatever, this radical change and long-missing choice is crucial to a healthy society, humanity and the world.