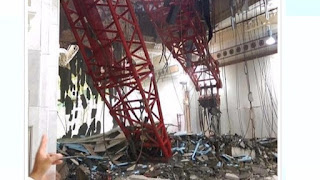 Yesterday there was a terrible disaster in the holy city of . A construction crane fell on top of the Masjid al-Haram, the world's biggest and most sacred mosque. is reputed to be the birthplace of the prophet Mohammed and was also where he is said to have met with the Angel Gabriel and was dictated the revelation from God that he later wrote down and published as the Holy Quran, one of the world's most widely-read books. In the centre of the mosque is a cuboid black building called the Kaaba. Inside this is a black stone with a mark on it said to be the footprint of Mohammed, his last on Earth before his assumption into Heaven. Muslims always face in the direction of the Kaaba when they pray, wherever they are in the world. The black stone might be a meteorite. One of the five pilars of Islam is the Hajj, this is an annual eight-day pilgrimage which all adult Muslims are obliged to take at least once in their life. The pilgrims walk around the Kaaba seven times during one of the rituals of the Hajj. The Masjid al-Haram mosque can hold almost four million worshippers and an extension is being built to increase its capacity even further. The huge builder's cranes have been a temporary addition to the skyline of the mosque from some time now. These structures are familiar sights all over the world, springing up whenever a large building project is being put up; they have become the symbol of economic growth and future prosperity. Modern cranes look highly precarious with their tall, thin towers and top-heavy arms, but they are very stable, being anchored firmly to the ground. They are formed of an open framework which means they have a low weight relative to their size and are not easily dislodged by the wind. Therefore it was astonishing and horrific when one of them toppled over and crashed down on top of the crowded mosque. Emergency services quickly attended the scene and removed the injured to hospital. At the time of writing, the death toll is a hundred and seven. Politicians from around the world have stated publicly how sorry they are; David Cameron, the Prime Minster said: "My thoughts and prayers are with the families of those killed... I'm shocked and saddened to hear of the accident in involving a large number of fatalities amongst those attending the Hajj." The crane was made in and belonged to the Saudi Bin Laden Group, one of the world's biggest construction corporations. The company is run by Mohammed Bin Laden; and his son Osama Bin Laden is supposedly the mastermind behind the 9/11 attacks... the irony is not lost on me. Is it therefore just a coincidence that this tragedy happened on September the 11th? The official news reports are blaming it on high winds, but the wind speed over was only twenty-five miles per hour; and, as I said, modern cranes aren't badly affected by the wind. It would probably take a raging gale to blow one down. How people will react to this alleged accident will depend on who they are. For those who blame militant Islam for the 9/11 attacks, they may well feel a sense of satisfaction because for them September the 11th is a day of infamy. Perhaps they will interpret the crane crashing down on this auspicious day as God's revenge, an alternative to the customary bolt of lightning. I imagine Pastor Terry Jones is smirking right now, see: http://hpanwo-voice.blogspot.co.uk/2010/09/burn-koran-day.html. For Muslims, especially those inside the mosque yesterday, they might also regard the disaster as a sign from God, but a very different one; that He is not pleased with his chosen people for their terrorist persecution of the and the rest of the infidel world. If, supposing, this was a contrived event, then the CIA or Mossad agents who planted a bomb at the base of the crane, or demolished it with whatever method the intelligence services use, will be thinking: "Ha ha! This is payback time. The West strikes back fourteen years ago to the day you Muslims struck us!" All these mindsets have one thing in common: they all assume that the official story of 9/11 is true. As regular HPANWO-readers will know, I do not, see: http://hpanwo-voice.blogspot.co.uk/2015/09/911-fourteen-years-on.html.
Posted by Ben Emlyn-Jones at 12:20

I suppose this event can mean many different things to many different people. The power of both subjective conditioning, synchronicity, coincidence, religious persuasion and - dare I say - a certain prejudice infringe upon one 'event' - that of 911 (As you say Ben).

The latter is the Alum that brings them all to the surface, and in a way even more so than religious dominance used to. Is this a progressive state of affairs?, I'm not sure I have asked the correct question there. . .

I guess the most powerful subjective viewpoint will let 'Truth' settle in it's inevitable place (whatever Truth is empirically speaking) and will always forcibly infringe itself upon other peoples perception of what this event means or does not mean, it always does unfortunately - usually to the detriment of what we are supposed to take or leave from this unfortunate event.

All being said I offer Metta thoughts to the families of those that have shed their mortal coil abruptly to the reality we ALL share regardless of the aforementioned perspectives.

X, it could be that the terrible disaster in Mecca is an energetic event. I came up with that idea after I wrote this article.