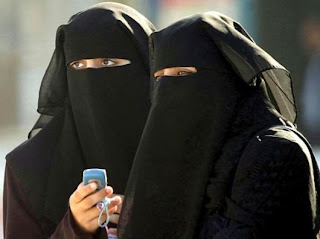 The issue of the burka has once again entered the news because a suspected Muslim terrorist has fled custody by disguising himself in a burka. Mohammed Ahmed Mohammed (now there's a sinister name for you!) was under a TPIM-Terrorism Prevention and Investigation Measure in which he was allowed to walk freely under certain conditions, such as wearing an electronic tag, reporting his whereabouts every day and being accompanied by police minders. Mohammed managed to abscond from his TPIM by cutting off his tag and leaving the mosque dressed in a burka, see: http://www.bbc.co.uk/news/uk-24799675. How he evaded CCTV in Acton, after that has not been explained. This case actually sounds really funny to me; it reminds me of Billy Wilder's classic comedy film Some Like it Hot, see: http://www.youtube.com/watch?v=fbQqnJw7xL0. Personally I doubt very much if Mohammed Evil al-Turban, or whatever his name is, even exists. If the British Intelligence services can fake the murder of a man on the streets of Woolwich, see: http://hpanwo-radio.blogspot.co.uk/2013/07/programme-52-podcast-nick-kollerstrom.html and: http://www.youtube.com/watch?v=CGWkuyc3MpM, then they can certainly fake a terrorist-on-the-loose scare. However, whether the story is true or false, the call has gone out again for the burka to be banned as a result, and that this has caused another upsurge of anti-Muslim and anti-immigration hysteria, for example see: http://bnptv.org.uk/2013/11/bnp-say-ban-the-burqa-now/.

The burka, niqab, or burqa, is a long dress with full sleeves, a hood and veil that completely covers the body of the wearer except for their hands and eyes. It is traditionally worn by women in some Middle Eastern cultures and has become more popular in the in recent years, mostly among recent immigrants. Contrary to popular belief, it’s not a part of traditional Islam. It is not mentioned in the Holy Quran at all and was not worn by any Muslims for the first thousand years after Mohammed’s life. The anti-Muslim lobby should ask themselves how bellydance could have emerged in a part of the world in which women were forced to wear burkas since the 7th Century. The Quran talks about how God wants us all to dress modestly, but this probably means just something like long trousers, sleeves or skirts, not a whole body covering. What’s more this commandment applies equally to both genders and there are no exceptional provisions for women. The burka was actually invented in the 16th Century by the Caliphs of Baghdad and was designed to shield the bodies of his family from the envious and resentful eyes of their “social inferiors” on the city streets. Therefore, far from being a stigma, a brand of submission and humiliation, the burka is really a status-symbol of nobility. And also, believe it or not, it was intended to be worn by both men and women! The Caliph and his sons wore it as well as his wives and daughters. Therefore technically I could wear one if I wanted to. Do you think it would suit me?

A recent poll claimed that 80% of British people would like to see the burka banned in public places, what's more they're already banned in . Women wearing burkas have reported being shouted at and sometimes even assaulted on the streets in ; news stories like the one above will no doubt contribute to these crimes. The justification for the ban is not only one of security; it's also the notion that the burka represents a form of imprisonment, like a shackle or pillory, designed to oppress women and keep them in their “proper place” as inferiors to men. In several countries ruled by Muslim theocracies, for instance, women are forced by law to wear them and can be publicly birched for flouting that law. I wonder therefore why the is so keen to assert women's rights here at home while treating as an ally and business partner when abroad. Most women outside Muslim theocracies wear the burka out of their own free choice and they took to the streets to protest when the ban was introduced in . They didn’t take kindly to the government patronizing them; nor do I. Imposing any kind of dress code or uniform on a public highway is a very serious matter indeed, and I said this too during the attempt to restrict the wearing of hoodies in 2005. It's the thin end of a very dangerous wedge, as I describe in this HPANWO TV film, see: http://hpanwo-tv.blogspot.co.uk/2011/04/ben-silver-leggings.html. The right to wear whatever you like on public streets is a fundamental human right I think; I would even repeal the law against public nudity, although the British climate tends to make any enforcement academic anyway. Is the Government planning to make all us wear colour-coded uniforms like the people in Aldous Huxley's Brave New World? It wouldn't surprise me, but how would they manage to get public support for such an agenda?... Clearly if it could be promoted as necessary for security or protecting women's rights; Problem-Reaction-Solution. You might think that a ban on just one particular kind of dress is a long way from Alphas in red- Gammas in green etc, but the burka ban sets a legal precedent that could be built upon by those who do want Brave New World uniforms and that's worrying. It is important that we don't let ourselves be fooled into forging our own shackles.
Posted by Ben Emlyn-Jones at 16:27