Linguicide in the Black Country 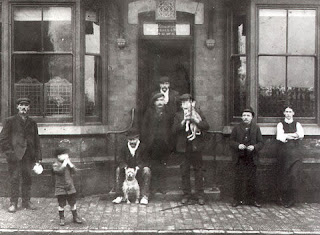 A school in Cradley Heath, has imposed a ban on speaking the dialect in class, see: http://www.bbc.co.uk/news/uk-england-birmingham-24967032.
Maybe it's because I'm a Welshman that I find this action so malevolent. My own ancestral Celtic language almost died out several times in the last few centuries; today Welsh is now happily thriving for the first time in over two hundred years with almost a million speakers, and booming art and cultural heritage media. However my great uncle and aunt in the spoke an isolated Dutch-Platt dialect called Groesbeeks and they were among the last ever speakers of it; when they died, it died with them. Of all the tales of Illuminati infamy, linguistic genocide is not one you'll hear mentioned very often. Maybe it's because people see language as nothing more than a tool for communication, with one being very much like the other. All are interchangeable and disposable and wouldn't it be ideal if we all spoke just one, stop all this inconvenient messing about with translation? But a language is more than that, it's a unique landscape of human experience and thought. People who speak different languages literally think differently. This is why languages often borrow words from each other when they want to describe a concept that has no word itself that fits. German and Japanese in particular contain many words that have no English equivalent. The German Heimat means "home", "home country", "dream location" and "place of origin". The Japanese word Komorebi means what sunshine looks like when seen through the leaves of a tree. The Italian Lalochezia means "gaining emotional relief by using foul language". Only a native speaker of these languages can truly understand these ideas properly and when the last native speaker of a language dies then the idea is lost, forever, and we can never get it back no matter what we do.

There are currently about seven thousand languages and distinct dialects spoken in the world today, but only three hundred years ago there were about twenty-two thousand. This means over two thirds of the languages in the world have died since then. Today over ninety-nine percent of the world's population speak only the top one hundred of the seven thousand remaining. We are facing a massive cull in human linguistics. Within a specific geographical language sphere, like , we also see less and less variation in speech. The classic dialect is all but gone. I was in last weekend and heard nobody speaking it; and this is a pattern we see repeated across the country. This is totally in line with the New World Order agenda to impose uniformity on the people. They'll have us all speaking the same language which they'll then downgrade into a degenerate shadow of its natural self through engineering and political correctness; Orwell's Newspeak. What's more another story has come to my attention along the very same lines. A teacher in with a Cumbrian twang has been told to tone it down, to "sound more southern": http://news.sky.com/story/1170839/teacher-told-her-accent-is-too-northern. Why are all the languages of the world dying out? In some cases the people who speak it simple disappear; this is certainly the case with the American Indians and Australian Aborigines. However the killing of a language is often more subtle and insidious than that; people simply change their speaking habits over a long period of time. Generation by generation they bow to social pressures that make speaking one particular language, dialect or accent advantageous over another; this is how Welsh, Gaelic, Manx and other minority tongues in the declined. The solution is to expose those who create the social norms which cause people to make subconscious decisions like that. But also we have to understand that the decision is still our own. We can be aware of exactly what is being done to us and defy it. We can enjoy our uniqueness and our independence, relish our differences. Language is always evolving and changing naturally despite the attempts to cage it. Synchronistically, the same week the above news stories came out, the Oxford English Dictionary has just added a series of new words to its pages. A selfie is a photograph of you that you take yourself using an electronic device and share it on social networks. Schmeat is artificial meat substitute like Quorn and to twerk means to dance in a sexually provocative manner, see: http://www.bbc.co.uk/news/uk-25009621. The author K David Harrison has written a book and made a movie called The Last Speakers, where he travels the world meeting the last native speakers of languages and trying to record their speech, see: http://www.youtube.com/watch?v=O89PkSNTtbg. I wish him luck. have also completed a dictionary and grammar of Groesbeeks, see: http://www.mijnwoordenboek.nl/dialect/Groesbeeks. Maybe we can awaken to the urgency of this mission and save the remaining languages of this world before it's too late and we realize how "doubleplus ungood" things are without them.
Posted by Ben Emlyn-Jones at 19:46