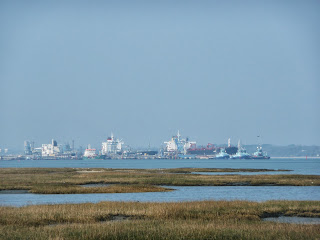 People living near Southampton Water on the south coast of , between the mainland and the , have been complaining of being disturbed by a strange noise coming from the direction of the sea. This has been going on for several months now. The low frequency "droning" has no apparent source, but the Environment Agency says it's probably fish mating, see: http://www.bbc.co.uk/news/uk-england-hampshire-24658172. Other theories are industrial processes, aircraft and power cables. It's difficult to know for sure because low frequency sound can travel a long way, especially through the oceans. The local council have tried to record the sound but have not been able to, although many people can hear it.

This sounds like another case of "The Hum", a phenomenon first noticed in the 1940's, but it became a major problem in the 70's. It's been found in many locations across the world; I first read about it in Janet and Colin Bord's Modern Mysteries of Britain. It is a low level, deep humming or warbling sound that is persistent, continuous and unvarying, here's a description from a sufferer: http://www.bbc.co.uk/news/uk-24584431. Some people find it very irritating and it can cause them to lose sleep or concentration. Despite the fact that it cannot be recorded onto tape or any other artificial medium many people maintain that they can hear it very distinctly. It seems to strike certain geographic locations at particular times. The theories proposed are: oceanic currents, very deep earthquakes, auditory hallucinations and tinnitus- a medical condition that causes ringing in the ears. Because it can only be detected by human ears, I think the Hum is more likely to be some kind of electromagnetic interference in the nervous system. In some instances radio waves directed to stimulate the auditory nerves can be interpreted as sound by the brain, in fact this mechanism forms the basis of the latest generation of hearing aids for the deaf, see: http://www.ncbi.nlm.nih.gov/pubmed/12112497. Some theorists have blamed power lines, in fact this was mentioned in the Bord's book. Could it also be a product of ELF- extremely low frequency radio? ELF transmitters have been used by governments for many decades to communicate with submarines. Also it may be related to HAARP, see: http://www.globalresearch.ca/haarp-secret-weapon-used-for-weather-modification-electromagnetic-warfare/20407. Something to look out for in the Southampton Water area is whales and dolphins beaching. This distressing occurrence often accompanies disturbances in the electromagnetic field of the Earth, whether from natural or man-made sources. Active sonar, sound waves broadcast underwater, can also have this deadly effect. Have there been any unusual activity in the region, like naval ships and aircraft carrying out frequent manoeuvres?
Posted by Ben Emlyn-Jones at 22:50


Great Content.I have appreciate with getting lot of good and reliable information with your post.......
Thanks for sharing such kind of nice and wonderful collection......again, beautiful :) I love reading your posts. They make me happy . . I know something information, to know you can click here
water cooler
water delivery