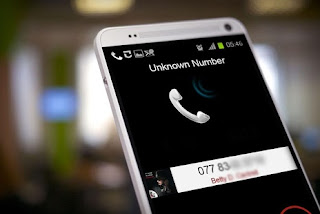 Some new information has come to my attention that sheds some light on the case of the strange Twitter voicemail that I posted about last week. See here for essential background: http://hpanwo-voice.blogspot.co.uk/2018/03/strange-voicemail.html. A YouTuber called "Strangeries" has uploaded a video that he rashly calls CONCLUSION to Creepy Twitter Voicemail Message. He begins by correctly dismissing the connections to @StrayedAway's voicemail and Flight MH-370. As I said at the time, this was excessive speculation and those numbers could mean anything. I decided it was best to ignore them and concentrate on the words. I also pay no credence to the messages @StrayedAway has received since then because they are probably just hoaxes responding to the initial publicity and his reaction to it. The interesting part is where Strangeries cites an obscure info-tech podcast called "Gimlet Media- Reply All". The podcast addresses the peculiar phenomenon of phantom calls. Phantom calls are a relatively new problem that affects thousands of telephone users, especially if you're calling on a mobile phone. What happens is that the handset rings and when you answer you hear only outlandish noises or a stranger talking to you in an unintelligible way. The podcast plays some examples. One appears to be an audio recording of a basketball match; another is a series of sirens from emergency vehicles. The caller never responds to anything you say to them. These calls are all recordings and they are from an automated system. The calls are designed to disguise themselves so that they just look like normal traffic on the network. They are either anonymous or are listed under a random number. If you are given their number and call the phantom back you will simply be put through to that random number and the recipient will be unaware of how their number has been misused. Phantom calls are a money-making scam. They have been sent by fake telecom companies that have joined the toll-free number service. A toll-free number is not free; it's just that the end-user is not charged and the line carrier picks up the bill by reimbursing the company, usually in exchange for advertising or something. This is why people who are targeted by the phantom calls scam do not notice any excessive payments in their phone bill. This is very different from the older "divert-calls" scam where users' services were stealthily transferred to a premium rate line which they were then charged for without their knowledge. The automated system for phantom calls is designed to phone up a large number of people and make as much cash off the toll-free service as they can. To maximise charges to the carrier, the phantom call has to keep the targeted user on the line for as long as possible. This is why it includes material intended to arouse the target's curiosity. Strange sounds and speech for instance. Hopefully the target will spend several minutes listening and saying: "Hello?... Who is this?" a few times to tot up a healthy payment for the bogus company. This is far more effective than the so-called "dead call", an annoying but unfortunately legal method which some marketers and advertisers use simply to profile potential customers. That is where you just hear nothing but silence and therefore, naturally, put the phone down immediately. Phantom calls are all completely criminal of course and the police are cracking down on them, so phantom calls probably won't be a problem for much longer; I'm sure they'll eventually be replaced by another fraud. Source: https://www.youtube.com/watch?v=XrsAYmVRsoA and: https://www.gimletmedia.com/reply-all/104-case-phantom-caller.

According to "Strangeries", @StrayedAway was probably just hit by a phantom caller. The strange message was simply intended to make him listen for as long as possible. This explanation might feasibly be correct, but there are several flaws in it. Firstly, the call was not picked up by Ty and it went to voicemail. The user was not actually on the line listening to the call live. Does this still count as a toll-free call? Would an automated system not be able to cut the connection when there was no answer? I'm not sure, but I'm doubtful; it seems to run contrary to common sense. The message also seems excessively elaborate for a phantom call. All it would have needed to do was keep Ty on the line. It could easily have grabbed his attention without the need to encode a real communication in the English phonetic alphabet, especially such a bizarre one. Live audio transliteration of the EPA is not easy for anything other than short strings. I have been trained to use the EPA because when I was a hospital porter I often communicated with other porters via a walkie-talkie. However for long texts I would need a pen and paper to decipher the longer strings of EPA letters and numbers. Including a meaningful EPA sentence in a phantom call would be completely superfluous. Why would the conmen behind it bother? I still think, as I did in the previous article above, that the most likely explanation for this mystery is that the Twitter voicemail was some kind of encoded communication from the world of espionage that was sent to @StrayedAway by mistake.
See here for background: http://hpanwo.blogspot.co.uk/2008/03/vrillon-broadcast.html.
And: http://hpanwo-voice.blogspot.co.uk/2014/03/malaysian-airlines-370-found.html.
And: https://hpanwo-voice.blogspot.co.uk/2018/02/missing-skier.html.
And: https://hpanwo-voice.blogspot.co.uk/2016/09/creep-clowns-return.html.
Posted by Ben Emlyn-Jones at 18:51

Did you get anything from Sophie the poorter's poet this easter by any chance? Only I do enjoy your unwrapping vlogs very much indeed.

Hi Gary. Glad you do, thanks. Not this year, but Sophie has other projects planned.