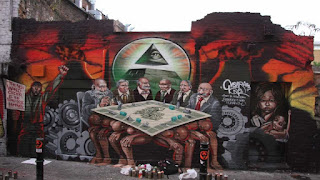 How does a piece of public art lead to the possible downfall of one of 's most senior statesmen? It sounds like a riddle and I'm sure it would baffle anybody just twenty years ago, but not in this current Orwellian age. Literally just days after being accused of being a Russian agent, Jeremy Corbyn, leader of the Labour Party and Her Majesty's Opposition, has been denounced as an anti-Semite. Being labelled an anti-Semite is incredibly easy these days if you're a UFO and ghost-believing tin foil hat-wearing conspiracy theorist like me, but it is still quite rare inside the pen of Corbyn's ideological community. The mural was put up in 2012 by the artist Kalen Ockerman, better known as "Mear One", see: http://mearone.com/. It was called Freedom for Humanity and was painted on a wall in the heart of 's . It depicts a row of six elderly suited men sitting round a table which is covered by a board game that resembles Monopoly. The table has no legs and its top is supported on the backs of four naked and faceless seated human figures who are bent over completely. Behind them are a pile of loose cogs from a machine. In the background is a pair of smoking factory chimneys next to two objects that are either volcanoes or cooling towers from a power station. There is a network of lines behind them that look like chemtrails in the sky. On the left is a man carrying a placard in his right hand that says: "The New World Order is the enemy of humanity." His left hand is held aloft in a fist. On the right is a tired and sad-looking mother holding her baby. Above the scene is a rising sun framing a pyramid with a detached capstone containing the Eye of Providence. I think it is a magnificent artwork and deserves to be ranked among the great examples of political graffiti across the world, like those ingenious pieces from and . It must have been a striking experience to walk down the street and see it. I was planning to take a trip to the location and film it for HPANWO TV while it was still there. Then I looked into the matter and I found out that it had already been obliterated in 2012, just three weeks after it had been finished. The borough council ordered the destruction of the painting on the grounds that it was "anti-Semitic!" Source: http://www.bbc.co.uk/news/av/uk-england-london-19844681/kalen-ockerman-mural-to-be-removed-from-brick-lane.

The problem that has arisen today comes from all those years ago. Jeremy Corbyn originally spoke out against the removal of Freedom for Humanity. He told the artist he was "in good company" and compared the removal of the painting to the famous Man at the Crossroads fresco in that was whitewashed by the Rockefellers for its Marxist iconography (It was happily recreated in at a later date). There is absolutely no suggestion at all that the six antagonistic figures in the painting were Jews. The artist himself denied it and the man on whose wall the mural was painted, a restaurant manager of Bangladeshi origin, said that two of the figures looked Indian, see source link above. The allegation is that the faces of the six evil men included generic Jewish features of the kind seen in propaganda from Nazi Germany. I don't see that myself; the faces are all very different. Two of them, the one of the far right and the one third from the left, look like old photographs of British colonial officials from the days of the Empire. The one on the far left has a full beard that is more typically Russian. The problem with the painting is most likely its conspiracy theoretical element. As I say in the background links below, there is a paranoid hypersensitivity when it comes to linking conspiracy theory of any kind to hatred of Jews. This serves a purpose for the people behind the conspiracy because it means their enemies are hampered by social degradation and marginalization. Therefore the conspirators eagerly encourage this public hysteria. However, in the background links I explain why it is, in the vast majority of cases, a false premise. The New World Order is caused by the Illuminati, not the Jews. I can't put it any simpler than that; there are no qualifiers to that statement. Corbyn was first pulled up by a Jewish MP, Luciana Berger, on Twitter (where else?). Corbyn backed down and about-turned. He said that Freedom for Humanity was "deeply disturbing" and he now "wholeheartedly supported its removal". He went on: "I sincerely regret that I did not look more closely at the image I was commenting on, the contents of which are deeply disturbing and anti-Semitic." As I've explained, the content of the mural is not anti-Semitic and there is information available to explain why that is in detail which I have produced myself. Corbyn should have known better than to believe that a grovelling public apology would save him from the standard and predictable hashtag barrage. It would have been better to stand his ground and fight the anti-Semitism premise altogether. If Mr Corbyn had approached me I would have coached him in this matter. The media lynch mob is currently in full swing; the torches and pitchforks are being passed round. Jewish welfare groups under the influence of the Israeli lobby have taken the bait hook, line and sinker. Corbyn is desperately trying to placate them, in vain. As I said, it's an exercise in futility. Source: http://www.bbc.co.uk/news/uk-43536830. This is just the latest in a series of attempts to discredit the leadership of Jeremy Corbyn by his Blairite opponents within the Labour Party. See here for details of the previous flare-up: https://hpanwo-voice.blogspot.co.uk/2016/05/is-ken-livingstone-nazi.html. The only real anti-Semitism in the Labour Party comes from the radicalized Muslims that the government have been breeding for the last few decades through their sponsorship of Saudi-run mega-mosques and their agents posing at popular media hate-preachers, see: http://hpanwo-voice.blogspot.co.uk/2016/08/anjem-choudary-arrest-blocked-by-mi5.html. Corbyn is actually very similar to Donald Trump. He would be deeply offended at my comparison, but I think it's accurate. He is a man in a political office whom the does not want in that role. They worked hard to keep him out of it. They have since wavered between trying to remove him and trying to manage the situation with him remaining as leader. Whenever the latter fails they try the former. Corbyn's career prospects are not looking rosy. A part of me thinks this is probably for the best; not because of Corbyn himself but because of the second echelon of Labour officials behind him, a posse of total blackguards who are currently trying to ride in his slipstream to their own positions of power. If Corbyn becomes Prime Minister then it will only be for a few months before there is an et tu Brute situation and then he'll be lying in the back benches with Andy Burnham, Yvette Cooper and Diane Abbott's knives his back. At the same time, anything that the real "Evil Six!" from the painting do not want gives me a warm fuzzy feeling. Thankfully the Jewish voice of reason has not gone silent in its hour of need. Jenny Manson of the Jewish Voice for Labour defended Corbyn and marvelled at the ingenuity of the media for smearing "the most passionate anti-racist campaigner of the last forty years" as "pro-racist and anti-Semitic." Source: https://evolvepolitics.com/the-jewish-voice-twitter-account-is-absolutely-destroying-the-medias-latest-corbyn-anti-semitism-smear-tweets/. I take my hat off to these people; they face abuse from other Jews for their stances. They were there for David Icke when he was in this position and I'm glad they are here again.
See here for background: http://hpanwo-tv.blogspot.co.uk/2017/06/jews.html.
And: http://hpanwo-tv.blogspot.co.uk/2018/03/new-mural-in-oxford.html.
And: http://hpanwo-voice.blogspot.co.uk/2017/01/is-david-icke-dangerous.html.
And: http://hpanwo-radio.blogspot.co.uk/2016/05/programme-188-podcast-jews.html.
Posted by Ben Emlyn-Jones at 17:35

Hi Ben, that is a really good blog I enjoyed reading it. Hopefully more of the same soon.

Hi Ben. Interesting article, thank you. I'm a member of Momentum and I'm a jew. Did you know that the leader of Momentum Jon Lansmann is also Jewish? The right of Labour and Conservatives conflate anti semitism with criticism of Israel,and they do it for political ends. I'm glad you support Jeremy, and maybe you could join us. Momentum will welcome you warmly. By the way I live in Prestwich and I hope you'll be speaking in Manchester soon my friend. Cheers. David

Thanks, Pete. There will be.

Hi David. Thanks very much. I am actually speaking in Warrington next Saturday evening at the Weird Weekend North. Hope to see you there :-)