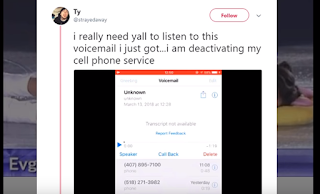 Two days ago a man received a voicemail on his mobile phone that caused him enormous distress. He wrote on Twitter: "I really need you all to listen to this voicemail I just got. I am deactivating my cell phone service... I don't know why I was just sent military code. The fuck do I look like Liam Neeson!?" The voicemail features a robotic feminine voice, probably electronic, reading out a list of letters and numbers in the English phonetic alphabet. This is a method of communication when using voice radio that I myself had to learn at the hospital because the porters were issued with walkie-talkies. Because voice radio is lower quality than face-to-face conversation, words are used to signify letters so spelling mistakes are more avoidable. Each letter of the alphabet is represented by a word that begins with that letter: Alpha, Bravo, Charlie, Delta... X-ray, Yankee, Zulu etc. The message transliterates as: "SDANGERSOSITISDIREFORYOUTOEVACUTEBECAUTIOUSTHEYARENTHUMAN042933964230SOSDANGERSOS." When you skim that string of characters you may detect a number of words even though there are no word spaces. In fact the string is a message in English with some numbers. It reads thus: "Danger SOS. It is dire for you to evacuate. Be cautious; they are not human. 042933964230 SOS danger SOS." The message was sent from a hidden number. SOS stands for "save our souls"; in the phonetic alphabet this is a cry for help. The S at the start could indicate that the recording is on a continuous loop. The numbers are less comprehensive than the words and are open to interpretation. Some commentators think they might be GPS coordinates. If so then they designate a location on a remote forested riverbank in , a West African nation on the . This is quite close to the (today called ) which is the centre of the fictional New World Order conspiracy in Robert Shea and Robert Anton Wilson's epic novel The Illuminatus! Trilogy. Some people have linked the numbers to the missing MH-370 airliner. Source: https://www.someecards.com/news/news/this-guy-mysterious-voicemail-terrifying-military-codes/.

The man who received the voicemail calls himself "Ty" on Twitter; his handle is: @strayedaway, see: https://twitter.com/strayedaway. (EDIT: This account has been deactivated, possibly by the user himself) He is absolutely terrified by what has happened and states that he has even thrown his mobile phone away. He believes he has been sent some secret military code by mistake and fears attention from the government security services. He claims that somebody photographed his house in the early hours of the morning just before he received his voicemail. He has since been sent messages, presumably on other media, in foreign languages; although these could be hoaxes by random people who have heard about his predicament. He does not enjoy being made a centre of attention for the UFO/paranormal/conspiracy theory movement and has even asked people to stop sending him direct messages about this matter. What makes this story credible for me is that I have followed "Ty" on Twitter and had a look through many more of his Tweets. His account is primarily one of leftist satirical comedy (Yes, such a thing exists!). He describes himself as: "I've got no two cents, no sense at all!... LGBTQ humour". He sounds like what is usually called these days a "social justice warrior" or "Antifa". I think he's American and a staunch liberal. There are lots of anti-Trump epithets on his feed. The thing is, belief in UFO/para/con subjects is virtually non-existent among people with those political leanings. He is definitely not the type of person to make up the story he has told. I have no doubt that the voicemail he received is real and his fear is not feigned. So what is the voicemail? Ty may well have been sent a clandestine government intelligence message by mistake, perhaps intended for an undercover spy or a hidden room in a foreign embassy. Before advanced modern communications these messages were conveyed on analogue radio channels and were known as "numbers stations". They could be picked up by a home radio set and were very similar in content to Ty's voicemail. They were often quite creepy and a few are still broadcasting, see: https://www.youtube.com/watch?v=u0F984w4vLQ. I remember finding one myself when I was a child. It simply repeated the letters "RYO" over and over again in Morse code. So what does Ty's voicemail mean? Leave aside the numbers; they could mean anything. The content of its words is alarming. It is an alert of danger and a call for assistance involving a hazard from something that is not human; but it might be mistaken for human by the recipient, hence the appeal for caution. This presumably refers to an intelligent entity; something extraterrestrial? It is impossible to know without more information. This is a breaking news story so there might be some more updates.
See here for background: http://hpanwo.blogspot.co.uk/2008/03/vrillon-broadcast.html.
And: http://hpanwo-voice.blogspot.co.uk/2014/03/malaysian-airlines-370-found.html.
And: https://hpanwo-voice.blogspot.co.uk/2018/02/missing-skier.html.
And: https://hpanwo-voice.blogspot.co.uk/2016/09/creep-clowns-return.html.
Posted by Ben Emlyn-Jones at 14:14