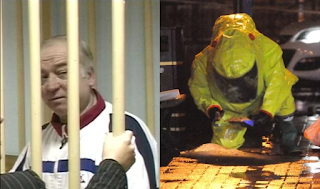 The globalist campaign against the biggest and most powerful nation currently defying their Illuminati lords and masters has taken a new twist. Last week a man and a woman were found unconscious on a bench outside a shopping centre in and were taken to hospital. It was discovered that they had been deliberately poisoned. The area where they were found was sealed off and three policemen were also affected by the contamination, one of them seriously. The man is called Sergei Skripal and the woman is his daughter Yulia. Skripal used to be a colonel in the FSB, the Russian foreign counterintelligence agency, the post-Soviet successor to the infamous KGB. However he was actually working as a British mole. Double agents are a common tactic in espionage. The most famous example are probably Kim Philby, Guy Burgess, Anthony Blunt and Donald McClean, the " spies". They were highly-placed British officials, but were really "deep throat" double agents passing information to the KGB. Skripal's cover was blown in 2010 and he was imprisoned for treason, but he was later pardoned and exchanged for ten Russian spies apprehended in the . The swap was reminiscent of the Powers-Abel exchange of 1960, a story told in the excellent film , see: http://www.imdb.com/title/tt3682448/. Skripal moved to and settled in , Wiltshire.

After the poisoning of Sergei Skripal and his daughter the UK Foreign Secretary, Boris Johnson has gone on the warpath, saying that this was an attempted assassination and that it was "quite likely" that is behind it. He is now demanding an explanation from . Source: http://www.bbc.co.uk/news/uk-43315636. On one level this is understandable. has a long history of carrying out violent acts of retribution against its political dissidents. When the spies defected in the 1950's they held press conferences in 's grandest hotels and did interviews for the Evening Standard; but for those who travelled in the opposite direction it was very different. They had to go into hiding and couldn't leave their home without bodyguards because they knew Soviet intelligence would murder them. Indeed the KGB succeeded several times, most famously in 1940 with Leon Trotsky; he was hacked to death with an ice pick. These punitive hits did not end with the fall of the . The FSB killed one of its defectors in 2006, Alexander Litvinenko, again by poisoning and again in . However with the case of Skripal there is no evidence that had anything to do with it. It might be a reasonable assumption because of the victim's background and the modus operandi, but "quite likely" does not count as proof. Also Skripal is not a defector. He was pardoned and released through due process. He was living in of his own free will and had permission to travel back to whenever he wanted. Why would the Russian state carry out an assassination against somebody with whom it had no open charges against? The Russian ambassador is vehemently denying his country had anything to do with it. What if this was a false flag intended to frame ? If you look at the other examples of anti-Russian propaganda I document in the background links then it makes perfect sense to be suspicious.
See here for background: http://hpanwo-voice.blogspot.co.uk/2015/02/you-really-dont-like-russia-do-you.html.
And: http://hpanwo-voice.blogspot.co.uk/2014/07/putin-did-it.html.
And: http://hpanwo-voice.blogspot.co.uk/2015/08/russia-disclose-ufos-or-we-will.html.
And: http://hpanwo-voice.blogspot.co.uk/2015/07/greece-get-with-russia.html.
Posted by Ben Emlyn-Jones at 19:16

With respect you are clutching at straws here. You simply do not know what charges the FSB/and or Putin (ex KGB) had against Skripal. You contend that it is 'likely' Russian authorities sanctioned this but you say that 'likely' is not proof. Surely your HPANWO work is based on what you think is 'likely' (eg UFOs) and yet you see no need to have firm evidence. Now it's the other way, i. e. a highly compelling hypothesis yet you reject it because there is not enough proof. Hardly 'likely' to be a smoking gun is there? Me thinks a tad inconsistent in your epistemological evaluations. Best regards. Nigel

No Nigel. My HPANWO work is not based on that, at least not to the extent that you could go to court with it.The Russian govt had no beef with Skripal. If they were worried about him they'd have kept him in jail. Whereas the globalists have every reason to stage a killing and blame it on Russia.

Well you operate in an arena where there is lots of speculation and no proof. Isn't that the case? As for the 'globalists'? What is their goal? To go to war with Russia perhaps? To impose US/Western hegemony? Why not attack China which is infinitely more powerful than Russia? Is Trump a globalist? He has been pretty ambivalent about Russia and he seems pretty keen on NATO. Be good to hear you expand on your theories for 'globalist' aims with regard to Russia. Cheers. Nigel

Ben, are you merely defending Russia because you need to contradict what the official line is saying?

Nigel. Those are a lot of questions which I will endeavor to answer in good time. Correct, there is no proof for my hypothesis, but neither is their for the official line.

Thanks Ben and I look forward to hearing your thoughts on 'globalist' intentions etc. Perhaps you can do a blog on it and specify it all. A lot of amorphous glib rhetoric in the conspiracy world. On the government line re Russia, well of course they're playing politics, trying to go for a bit of Russophobic populism and failing as they usually do. That spy betrayed Russia and the authorities may have had other issues with him that we will never know about, things that made him a threat to Russian security. I don't have any sympathy and in the great scheme of things it isn't that important but there will never be cast iron proof that we will hear about so your problem with the government allegation is redundant. Thanks. Nige

Ben, you really need to get a Hawking's blog out today at the latest, it is of the utmost importance that your fans read your good opinions ASAP.

Nigel. Have a look at the background links at the bottom.

Constantine. I was very sorry to hear that Hawking had died. I do have a few words to say, but I'll leave them for now. It's too soon.

I've looked at those. Thanks but they don't really answer my questions. I would have to hear how Russia fits in with globalism and the New World Order.

I'll work on that, Nigel. Hope to provide answers soon.