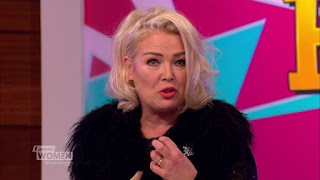 Of all the low standard TV programmes of the present day, Loose Women is one of the most excretable. It combines shallow tabloid gossip-column mindlessness with malicious feminist hatemongering. It was launched around the same time the BBC banned all-male sports and political panels as part of their long and brutal march towards "Equality!" Its concept therefore smacks of vainglory. However, even in the filthiest dung heap a jewel can sometimes be found. Kim Wilde is quite a jewel. I admired her enormously as soon as I was old enough to think in those terms and she is still beautiful today at the age of fifty-seven. Her debut single Kids in America is virtually an anthem of my childhood. However since then she has revealed a hitherto private aspect of her life. On last Monday's episode of Loose Women she revealed that she had seen a UFO. Her sighting happened in 2009 when she had taken her son to hospital with suspected swine flu. She saw a bright light at the back of her house and went into the garden to look at it. She saw several lights that appeared to be chasing each other and part of a much larger structured object partly hidden by the clouds. She was not the only witness. Her husband saw it and went to look for a camera to film it, but couldn't find one. Many other people saw it. It even made the headlines of her local newspaper. She believes that aliens are "keeping an eye on us." She suspects that they are very disappointed with how we treat each other and the planet, understandably. This theme comes up in contact cases too. I wonder if Kim has had any but has forgotten them; or perhaps doesn't want to reveal them yet. Source: https://www.standard.co.uk/stayingin/tvfilm/they-have-been-keeping-an-eye-on-us-for-a-long-time-kim-wilde-opens-up-on-loose-women-about-ufo-a3787836.html. Well done to Kim Wilde for speaking out about her experience. It takes a lot of courage to talk openly about these matters when you are in the public gaze. She will no doubt be lampooned in the media novelty slots the same way Robbie Williams was, see background links below. I hate it when that happens and will do my best to defend people who are abused in that manner. I wish her all the best.
See here for background: http://hpanwo-voice.blogspot.co.uk/2017/08/alien-actor-meets-real-aliens.html.
And: http://hpanwo-voice.blogspot.co.uk/2017/01/vaccine-danger-shoot-messenger.html.
And: http://hpanwo-tv.blogspot.co.uk/2018/02/the-bbc-and-mind-control.html.
And: http://hpanwo-voice.blogspot.co.uk/2017/09/ufo-truth-magazine-issue-26.html.
Posted by Ben Emlyn-Jones at 19:31

She speaks very highly of you too Ben!

Anon: So THAT'S who sent me those pair of knickers!...

I don't listen to the Brussels Broadcasting Corporation but I needed some idea of the time this morning and flicked on R4.... at the exact moment Kim Wilde was being interviewed on 'Saturday Live'! And yes, they asked her about the UFO. I don't know if this was mentioned on 'Loose Women' but what I found particularly significant was that she was first alerted to look up in the sky by the presence of a couple of helicopters which flew around and then went away just before the first bright light appeared.

The 'show' may well be excrete-able but it most certainly execrable :)