Fines for being Homeless 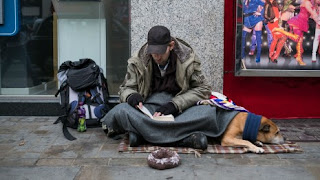 Several readers have contacted me to demand why I am not covering this subject. My correspondents seemed to regard this as a dereliction of duty and self-indulgence on my part. I was avoiding "really serious issues!" like this one and wasting my time on frivolities like UFO's and conspiracy theories etc. Not true. firstly, I have covered it; see the background links below. Secondly, UFO's and conspiracy theories etc are not frivolities; they are directly connected to the problems of human wellbeing, including homelessness. has more rough sleepers per-head than anywhere else in outside . I've noticed it getting worse in recent years. It's impossible to walk through the city, especially in the evening, without being approached by beggars, looking for money to pay for the charity shelter, The Gatehouse. There used to be a free dormitory run by the council which shut a few years ago, which of course explains why rough-sleeping has increased. The reaction by the city council to this has not been to reopen the dormitory, but instead to hire "civil enforcement officers" to walk round putting notices on homeless people's property and issue fines for repeat offenders; as if these people have money to pay the fines even if it wasn't an immoral attack. Source: https://www.theguardian.com/society/2017/jul/26/oxford-homeless-people-face-fines-belongings-doorways. How much do these enforcement officers cost to employ? Probably more than the dormitory did. It is not only insulting and dehumanizing, it is also totally impractical to treat homeless people as if they are some kind of wrongdoer. It is possible to clear fire exists without handing out penalty notices. Two hundred years ago there were workhouses in this country. How many poor souls did they have to lock up before the penny dropped that people are not homeless because they want to be; that it's some kind of lifestyle choice? The delusion has not gone away though, in fact it's making a comeback, and perhaps the dark shape of the workhouse roof could once again rise above the skylines of our declining industrial towns.
See here for background: http://hpanwo-voice.blogspot.co.uk/2014/06/anti-homeless-spikes.html.
And: http://hpanwo-voice.blogspot.co.uk/2008/12/no-crib-for-bed-in-oxford.html.
And: http://hpanwo-tv.blogspot.co.uk/2011/10/down-and-out-in-oxford.html.
Posted by Ben Emlyn-Jones at 00:06

Hiya Ben, I hope this message finds you well. Just to start I will be getting my Dreaming Saucers ticket when I get paid next week. Can I do a bank transfer at all? Well, after reading your blog today I am blown away. Where can I join HPANWO or buy merchandise or both? If neither where do I donate and who too? I take it HPANWO has quite a few bods behind the scene who keep it ticking along everyday, I mean you must have a dedicated team of researchers helping the cause. I remember when you started and now look at you, you are taking over and it is a wonderful thing to behold.

Also with regards to your Roswell books I have mentioned it as a suggestion for people to read at my local book club. There are about 15 of us and we meet every 4 weeks to discuss a book that was chosen recently. Anyway, they have asked me to nominate a novel and I said could I do two which are part of a trilogy, your books, and they said they will consider it. Would you be able to sell thirty odd books to us if we decide to read them? This could have a knock effect, too. Don't worry we won't ask for a discount as we know every penny counts to the author and I wouldn't add on at my end either. If you sell for £10 a unit, I sell for £10 a unit. Fairs fair. It was just your blog today that got to me. You are so right that UFOs and conspiracy theories are so important, if not more so, than many social issues.

Anyway. I look forward to hearing from you.

Hi Roger.
Thanks very much. By all means. Tell me your email address and I'll be in touch.
Best wishes
Ben

Hi Ben, have you any plans to come to Merseyside I wonder? There was an active Truth movement here about ten years ago but nothing now. A lot of cultural marxism in Liverpool and personally I'm on the radical right of politics. I attended the second White Man march in Liverpool about two years ago and couldn't believe the reaction from the reds. Very violent people they are. It would be great if we could have some Truth events again with yourself as a speaker. Maybe covering nature based ideology and how to remain critical in a left wing society. Cheers. Paul Davies

Hi Paul. There are a number of Truth groups that cover the Merseyside area, such as Freedom Northwest. It sounds like you are more Alt-Right that UFO/Con/Paranorm. I don't know what the Alt-Right scene is like in your area. I would be happy to address an Alt-Right meeting. I will address virtually anybody who is willing to host me. I am not Alt-Right though and so will raise some controversy. Best wishes. Ben