Troops on the Street 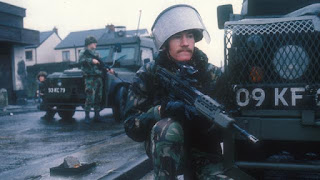 Yesterday evening, following the Manchester Attack, see: http://hpanwo-voice.blogspot.co.uk/2017/05/manchester-attack.html, the Prime Minister Theresa May announced the 's Terror Threat Level was being lifted to its highest notch, CRITICAL. She said that the army would be deployed into crucial public areas to assist the police in protecting the public. This could constitute the British equivalent of what Americans call the suspension of Habeus Corpus. This term, meaning literally "holding the body" in Latin, refers to the lawful process of arrest and detention in criminal cases. It designates a distinction between judicial law and martial law. In most countries this means the police and the armed forces are given carefully demarcated separate roles within the state. Law enforcement is for the police, defence against foreign state actors is for the armed forces. The moment these roles overlap we are in big trouble. History has shown that this process is a one way street. The blending of military and police functions is very rarely repealed willingly, despite all the reassurances, every single time, that these are just "temporary measures". It only ends after some kind of uprising or crisis. As I have stated over and over, the trend in world politics is towards greater authoritarianism and internationalism. Now is effectively in the same state of emergency that is, and has been since the current state was declared over eighteen months ago following the November 2015 attacks, see: http://hpanwo-radio.blogspot.co.uk/2015/11/programme-164-nick-kollerstrom.html. We can expect to see the police becoming more heavily armed and the soldiers being issued with police-like uniforms and kit. Eventually the two services will blend into one and might even become organizationally connected, as they already are in many countries, such as and . I still don't know yet whether the atrocity in was a false flag or whether it really was what the government are saying, a lone Islamist suicide bomber operating independently, or as part of a self-organized terrorist cell, for personal motives. Really, it matters not. The government are exploiting it anyway. This is what we in the Conspirasphere have been predicting for years. It is not inevitable, but we have to see it for what it is and put a stop to it. Source: http://www.bbc.co.uk/news/uk-40023488.
Posted by Ben Emlyn-Jones at 08:54

That is a very interesting and extremely troubling point you make Ben (that the NWO merely creates a framework for these events to occur to subsequently exploit when they inevitably do). This sort of approach would be very hard, if not impossible, to trace back to the source. Keep up the good work all the same.

Thanks, Laurence. Will do. I know troops on the street are a well-known part of your country's history. For the whole time of the Troubles British forces patrolled the streets of Northern Ireland. For us in mainland Britain it is a completely new idea to which we're not desensitized. Have you seen the film "One by One". It's not as famous as it should be, not least because it was Rik Mayall's last movie. It is not a comedy. In fact it's very dark and chilling.

Well ya see Hitler started all this with your Enabling Act after the riechstag fire that he started himself just to give hiself more power. Difference is he was acting in the interest of your German people to be fare. Ben mate I don't wanna see the army or plod swarming the streets. The best thing is a good right wing peoples militia on the streets. Ordinary blokes who are not scared and a bit handy like. Your government wont like that idea though. I wanna see more hate towards the muzzles so the vermin are constantly shitting themselves. Even give em a good old kicking for jollies as a deterrent thing. Theyl think twice about abusing and raping are girls I tell yer. Look at bleeding Sweden mate. Rape capital of the world thanks to your cultural marxism. Rape is just a natural thing to your muslims im afraid mate. The left wing elite dont give a shit though. I admire Tommy Robinson to be fare. Hes got balls and I think Paul Golding is a decent bloke to and even that jayda bird to be fare mate. CheerS Baz

Baz, you said: "I wanna see more hate towards the muzzles so the vermin are constantly shitting themselves. Even give em a good old kicking for jollies as a deterrent thing. Theyl think twice about abusing and raping are girls I tell yer." Does that include my friends and housemates Achmat and Hosn? Listen to yourself, mate. This is not the answer. Don't tar all Muslims with the same brush!

When I heard that on the local news (being in the Greater Manchester region myself), hearing the puppet MP Andy Burnham discuss with a reporter how they are deploying armed police in London at certain locations such as Buckingham Palace, etc, it made the hairs on my neck stand up and I thought "hear we go, we've been saying this all along this is what they want". The reporter then asked him would there be armed police in Manchester, to which he replied "there's no suggestion we would want them here, but we would like this to be the case". You aint joking mate. They know damn well they want them on the streets of Manchester, just a drip, drip effect.

I thought more tragic events like this would wake the masses from their sleep, but in reality it is doing the complete opposite. Instead of questioning why they are so frequent, the average clueless person just bangs on about how we should stop those evil muslims and parroting what they've just heard on the news. People will be in open arms with more authoritarianism after this event and in any more surveillance that's rolled out.

Sorry ben mate. Your right of course. I like law n order and you would have anarchy and riots and so I suppose I dont mean like random beatings. I get carried away and I should try to think things threw a bit to be fare. What to do though coz there isnt gonna be a political solution any time soon? The politicians dont care about the white working class. Were just scum to them and they dont care if are girls are abused or how many of us are killed. I reckon that only leaves confrontation. What else can we do Ben? Violence has to be part of the political processes surely mate? We might not be there yet but we're gonna be in a war situation within the next five years mate. We cant just sit around talking about it and saying everything is a false flag mate. Cheers Baz

Hello Ben, thank you for taking the time to reply in detail (I don't know how you manage to keep up the level of output!:) ). I am intrigued by the film you mention, (although it may be hard to see beyond Alan B'stard, I would imagine). With respect to the army on the streets, the Irish military would have no problem being seconded to the Gardaí, owing to the type/structure of the police/army corps and our difficult history of dealing with terrorism at the border and the potential that exists here for armed insurrection (the IRA believe themselves to be the official army of the Republic). Similarly, I have heard it said that the British army masqueraded as police during the miners strikes of the 80s?

Hello Viv but you say "Those following the ideology you share is the reason we have cultural Marxism." I aint well educated but I think your cultural marxism came before my ideology. So I think your bit mixed to be fare Viv luv. Somone told me that ideas threw hisstory are in competition with each other and its called dialecticals or something like that. Now how do we like go back in time and stop cultural marxism from ever happening? I dont think you can but maybe Ben knows a way round this? My ideology is just racial nationalism which I think is just a common sense belief system to be fare. Cheers, Baz

Its ok, I aint too well educated neither Baz poppet. A lot of history under the bridge as they say. Who knows what really came first. I guess its a kinda "chicken or the egg" thing. I like your point made about "ideas in history are in competition with each other" - no doubt encouraged and maintained by those up top! Regardless what came first, racial nationalism and cultural marxism are opposing forces of the same system being ideologies "in competition with each other".

Its ok, I aint too well educated neither Baz poppet. A lot of history under the bridge as they say. Who knows what really came first. I guess its a kinda "chicken or the egg" thing. I like your point made about "ideas in history are in competition with each other" - no doubt encouraged and maintained by those up top! Regardless what came first, racial nationalism and cultural marxism are opposing forces of the same system being ideologies "in competition with each other".

Thanks for all your comments, everybody :-)