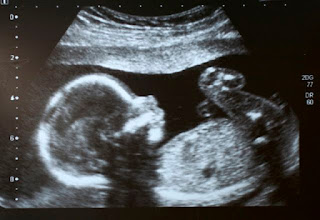 Several readers have recently asked me to write about the subject of abortion. is unusual among Western nations in that its constitution protects the lives of unborn people. For most developed countries human rights apply equally to everybody from the moment of birth, but not before. The Irish Republic, on the other hand, has the Eighth Amendment to its constitution that states: "The state acknowledges the right to life of the unborn and, with due regard to the equal right to life of the mother, guarantees in its laws to respect, and, as far as practicable, by its laws to defend and vindicate that right." This is distinctively different to British law which includes no such right. To kill a baby the moment after it is born would mean prosecution for murder, but to kill that same child a few minutes earlier while it is in its mother's womb is merely a medical procedure... I know; I've seen it done. Killing the child a few weeks or months before birth is routine and socially acceptable. Millions of terminations of pregnancy, usually just called "abortions", have been performed in the . It's as everyday as a trip to the dentist and, thanks to modern medical techniques, is often not much more invasive. I am totally pro-life, but debating those who disagree with me is almost impossible because I'm so vulnerable to ad hominem. You can absolutely guarantee that a pro-abortionist will go on to respond: "But, Ben, don't you believe in a woman's right to choose?" A woman's right to choose. That little phrase is a masterpiece of propaganda. It effectively says: "If you don't want to be a misogynist, support infanticide!" Whoever came up with that at the Fabian Society, or 's equivalent cultural Marxist think-tank, must be a mind controller extraordinaire. There is no honest answer I can give that won't lead to the rebuttal: "So, Ben, are you, as a 'white!', 'heterosexual!', 'male!', prepared to tell a 'WOMAN!' who has just been 'RAPED!' that she has to carry the baby to full term?" I'm forced to reply "yes," and you can guess how the rest of the conversation will go. There are a few alternative responses you can use. I once said to somebody: "OK, imagine I'm not an 'EEEEEEvil WHM!' and instead pretend I'm a one-legged black lesbian with dyed green hair, and I'm saying the same thing. How would you counteract my actual point?" However, a far more cogent answer, that I will definitely use next time I'm in that situation is: "If you were the child conceived, would you want to live or die?"

All people alive today are former foetuses. Humans begin as all mammals do, as a single cell inside our mother's body. In just nine months we grow into a fully-formed miniature human being. During those first nine months of our lives, we too could have been aborted. We always hear from pro-abortionists: "It's not a human being yet, it's just a clump of cells!" Well a clump of cells is all I am right now, although it's a much bigger clump today, admittedly. At what point does one become the other. Is an embryo of a thousand cells non-human and one with 1001 cells human? If so why? What's the difference and why is the cut-off point where it is? If you set a legal term limit on abortion at, say, thirty weeks, does the foetus magically transform into a human baby at the stroke of ? You see how absurd the justifications for abortion are? The objection to abortion is not just a religious bugbear; it's a serious secular human rights issue. Sometimes abortion has to be done because it would otherwise put the mother's life in danger. An ectopic pregnancy is doomed from the start because if it is not terminated it will eventually kill the mother and then both mother and baby will be dead anyway. There is currently a campaign in to repeal the Eighth Amendment led by feminists, several medical experts, secular activists and leftist politicians. There is a counter-protest as well, see: https://www.yestolifeireland.org/. I very much recommend the lectures of Dr Anthony Levatino, a gynaecologist who used to perform terminations until he experienced a crisis of conscience, see: https://www.youtube.com/watch?v=p5E2qobpSOI. Even though I support a total ban on abortions except for the obvious exemption I discussed above, I don't believe women who have had abortions should be criminally charged. Instead I would like to ask what is wrong with society when it makes a mother feel she has to kill her own child. I would like to address that. Women who have abortions often suffer terrible emotional trauma afterwards. I knew somebody once who confided in me that she had done this and she broke down in tears. I wish those women peace and comfort. They weren't to know.
See here for more information: http://hpanwo-voice.blogspot.co.uk/2016/02/richard-dawkins-banned.html.
And: http://hpanwo-voice.blogspot.co.uk/2015/06/jason-wilson-on-cultural-marxism.html.
And: http://hpanwo-voice.blogspot.co.uk/2013/01/discrimination-against-christians-2.html.
Posted by Ben Emlyn-Jones at 16:59

Oh wow mate. Superb blog that one. Totally agree with every word Ben, bloody brilliant. I never knew about the irish law on abortion but how bloody better than are laws eh Ben. They actually protect the unborn. Well your marxists and your feminists will soon change that lot mate given half a chance. My old man god bless his soul told me not long before he passed away that my mum wanted to have me aborted coz she already had 4 and I was born years after the others when she was I think in her 40s so she was gonna get rid to be fair. All for getting rid of me she was. My old man though would not have it ben. This was when your abortions had just become legal and that. She felt she couldnt be doing with more nappies and all that I suppose, but my dad God bless him wouldn't hear of it. He was a good catholic to be fare but he married a protestent but there was no way he was gonna have me flushed away. So Ben its very personal for me you see mate. I want to see all abortions be made a criminal offense the way it used to be. When I last looked Ben, murder was illegal so why should this be different eh? Anyway as always mate brilliant article and wish there were more like you in the world. You should be leading a political party to be fare. All the best. Baz

Extreme cases make bad law, they say. You are to be congratulated Ben for raising awareness of this issue in England; hopefully through the efforts of writers like yourself and others who have first-hand experience of the disastrous consequences of this evil practice-- a practice that affects disproportionately the working man and woman when institutionalised within the medical system--will raise awareness in England to what the Cultural Marxists are attempting to introduce in both the Republic and North. It is noteworthy that the Marxists of Sinn Féin, true to their murderous form, are the biggest cheerleaders for the introduction of the barbarous practice, presumably in the perverse hope that more Unionist/Protestants than Republican/Catholics will act on any change to the Constitution of the Republic, a Constitution that they despise. God bless you Ben for this piece.

P.S. It may surprise you to know that this very day (May 13th 2017) is the 100th anniversary of the Apparations of Fatima, Ben. I understand that you have investigated these events (including the so-called Miracle of the Sun) and I, for one, would be very interested in a piece on these events within the context of Ufology.

P.P.S. God bless your Dad, Baz; he is smiling down on you now.

Thanks Laurence. Like Ben you really know your stuff and just shows that the right has far more intelligence than the horrible cloned left wing who only want to destroy everything of value in the world. On the subject of Ireland I have always hated the IRA and was proper glad when Mcguiness died not long ago. I hope the bastard suffered. He should of been hung to be fair. That liberal marxist Blair loved the IRA and am afraid that Corbyn does as well. More so I would say. Thats why I wont be voting for Corbyn ive decided. I've read what ben says on him and I agree on some good things about him but the fact hes basically a commie and a lover of terrorists means that I cant vote for him. I might vote BNP coz I agree with there policies on everything really. Yes they were Nazis many years ago but they have evolved and I cant say there extreme on anything to be honest. I reckon BNP will outlaw abortions to be fair. They dont actually say it but it fits there worldview. Im bit drunk now as i went the pub (again) so sorry if I go on and probably my writing isnt very good. OK thanks again Ben and Laurence. Cheers Baz

That's alright Baz, your writing is fine. Sinn Féin/IRA have evolved from Marxist terrorists to Cultural Marxists, in no small part thanks to Blair. Blair was and continues to be hugely influential in Irish politics and most politicians here could be classed as New Labour, as a result. Egregious cowards the lot of them. From an outside [the UK] perspective, I can see that Corbyn is battling against the New Labour propaganda machine and he should be applauded for that; with Corbyn you know what you're getting and can vote accordingly. I disagree with what he says but I defend his right to say it, as it were. Having said that, he is very misguided with respect to Sinn Féin, who are beyond heinous: pathological liers, murderous, and devious to the finger tips. If anything, it reminds me of poor old Neville and Hitler. If I were to vote in the UK, I would vote along the lines you are thinking.

Thanks for your comments, guys. :-)

Youre missing a trick. Over in England youve time limits on abortions and they match when a life is viable outside of the womb. I think its 24 or 25 weeks. After that its only in exceptional circumstances that an abortion can take place. Women who have been raped should have the immediate right to an abortion. Imagine having a child and having to look at it each day remembering the violence and pervert that put the child there.
I enjoy reading your site but I dont think you come across well when you let Baz make comments like black bitch and let him go on about faggotts and shirtlifters. I know you dont agree with everything he says but because you dont stop him it could come across that you are happy for him to say it.
Laurence the English and loyalists have been as murderous and cowardly and devious in the north as SF and IRA. Who was it that let Pat Finucane be shot in his own home whilst eating.

Anon, I suggest you read my replies to Baz in more detail. I'm not going to stop him having his free speech. I disagree with him, as you say. ;-) Laurence is a good guy and I suspect you have also not read his comments properly either. As for termination following rape: It would be undemocratic of me not to support it if there was a referendum, bearing in mind this would involve people voting on whether THEY THEMSELVES felt that they should be killed if they had been conceived by rape.

Hello Anon 17 May 2017, as Ben alludes to, there is fault on both sides of the Northern Ireland problem but really my focus is on the issue of Cultural Marxism and the effort to introduce abortion on demand in both the Republic and North. FYI, Unionists in the North are pro-life.