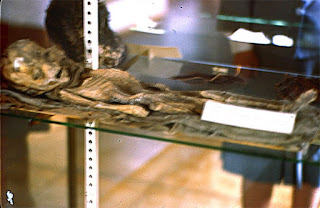 The title of this article are words I never expected to utter. The so-called "Roswell Slides" were presented to the world in 2015 amidst the biggest fanfare conspiratorial UFOlogy has ever seen; see the background links below for the full story. Even before the livestream was finished the corpse in Hilda Blair Ray's slides had been identified as a museum exhibit. The body had been discovered in 1896 by the archaeologist SL Palmer at Montezuma's Castle, an old city built by the Mesa Verde culture in what is now Arizona USA. It had died about three thousand years ago and was crudely buried, wrapped in a cotton sheet. It had been kept in several museums, sometimes in storage and sometimes on display. It had been laid out to view at the in 1947 when Mrs Ray had taken the two infamous Kodachrome photographs of it. A more recent independent image of the same exhibit was found soon afterwards, dated from the mid 90's. Soon after that the artefact was listed under the Native American Graves Protection and Repatriation Act; meaning that it had to be taken from the museums and given to the Pueblo tribe, the modern descendents of the Mesa Verde people. It was then given a traditional American Indian funeral and buried in the late 1990's. There was an orgy of embarrassment, accusations and resentment, then the incident was forgotten. I wrote this at the time: http://hpanwo-voice.blogspot.co.uk/2015/05/my-last-word-on-roswell-slides.html, and I thought it was just that. However, a friend of mine has made me aware of a development that has compelled me to put quill to parchment yet again on this matter, and it might even reopen the case.

Jaime Maussan has received most of the blame for the 2015 debacle, unfairly I think; however he has picked himself up and carried on in his typical irrepressible way. In August last year he gave a lecture in which he says that the mystery of the Roswell Slides is not solved yet. He concedes that the object displayed was an exhibit in a museum, but he has presented a case that the body is still not actually human. The story goes that we see the mummified body of a completely normal human being, a two year old boy. This was what SL Palmer believed it was when he found it, but was he correct? Before May the 5th, the Roswell Slides team approached some medical experts for their opinion on the body portrayed. They declared that it was definitely not human because of its ribcage, pelvis, joints and limbs. They believe it is an example of "convergent evolution"; the being resembles a human because it lived in a similar habitat to humans, but it is still not human. It is far too tall to be a two-year old child; in fact it is almost four feet tall. However this might not be true; there are different views going round right now. Either way, it is a minor point. There are many other anomalies. Source: https://youtu.be/01VxWsHLQJs?t=1h9s. So did SL Palmer make a mistake? Did he dig up the body and assume it was another normal Mesa Verde mummy? What else could he have been expected to think? It's interesting that this is not the only piece of evidence for extraterrestrial life that has emerged. Another is far stronger and was discovered only two hundred miles away; I'm talking about the Starchild Skull of course, see here for details: http://hpanwo-voice.blogspot.co.uk/2016/02/the-starchild-skull-and-twin-towers.html. Luckily the data for the Starchild is extant and in possession of researchers. Where can we go from here regarding the being in the Roswell Slides? Unfortunately, as I said above, the body was buried about twenty years ago. Even if the grave can be located then it's no longer a simple case of digging it up. It is now legally protected, not only by the Native American Graves Protection and Repatriation Act, but also by the standard laws related to people's rights of sepulchre. To exhume a grave without a properly issued court order is a serious criminal offence... even if the beneficiary of those legal rights is an extraterrestrial being. Researchers investigating the Aurora Incident faced the same problem, see: http://hpanwo.blogspot.co.uk/2012/04/pre-roswell-roswells.html. I doubt if a court will grant such an exhumation order on the grounds the deceased "may have been misidentified of its origins". It's a shame nobody spotted the anomalies of this mummy beforehand. We must not let an opportunity like this slip past again. Please stay alert when you next visit a museum and if you see anything atypical, report it.
See here for essential background: http://hpanwo-tv.blogspot.co.uk/2015/05/ufo-disclosure-2015-roswell-slides.html.
And: http://hpanwo-radio.blogspot.co.uk/2015/05/programme-136-podcast-roswell-slides.html.
And: http://hpanwo-voice.blogspot.co.uk/2015/05/roswell-slides-day.html.
And: http://hpanwo-radio.blogspot.co.uk/2015/05/the-poker-programme-9.html.
Posted by Ben Emlyn-Jones at 18:35

Don Schmitt, Tom Carey, Adam Dew and the other players in this episode have conceded that this episode has concluded with the deblurring of the slides and identification of the body. Only Jaime Maussan and a few of his associates remain to champion the slides as something beside pictures of human remans.

You say, "However, a friend of mine has made me aware of a development..." But if you stated what the development was, I missed it. As far as I know, nothing has changed.

All the extraordinary claims of a non-human being were made by (alleged) experts viewing out of focus pictures, not a body. The faulty estimate of the body being nearly four feet tall was disproven before the BeWitness event, and later conformed by measurements made of the museum shelving material. It confirms the length of the body as shown in the National Park Service documents, and matches the archived photograph. Anyone can look at photos of other mummified human remains and find features equally alien to what's seen in the Roswell Slides. There are genuine mysteries, but this is not one of them.

The only unanswered question is: How were these mistakes hidden until all the tickets were sold?

Awful grammar. Makes no sense at all.

You haven't done any research here, Ben. You're just parroting what others have told you, and none of it is new. You are obviously suffering from an acute case of "confirmation bias" where anything that fits what you WANT to be the truth is assumed to be correct, despite all the evidence to the contrary. Maussan is an idiot. He has proven this several times. Either that or he willingly peddles hoaxes to make money. But because he says its four feet tall, it is? Very basic, easily verifiable research proves that it is not almost four feet tall. This is not debatable. It's basic logic and anyone who denies it is lying or completely incompetent. Ben.. This means you are either lying, or completely incompetent. I don't think you are lying. Go back. Actually look at the work done by others debunking the four foot claim. They are correct. You, and Maussan, and your friend, are wrong. Absolutely, unequivocally, 100%, wrong.

Curt, please go back and read my post again. I SAID that they conceded that the body was a museum exhibit, and so did Jaime.
A lot has changed, at least since I last examined the case. That's why is IS a new development. After the slides came out we were told that the body had been positively IDed as a museum exhibit AND a Mesa Verde mummy. Now it turns out only the first part of that is positively known. I detail all this thoroughly in the background links.
You're wrong about the experts only being shown the blurred image.
You and I both know how and why the truth was held back from the public until after May 5th. Nobody has had their money back off Adam Dew to my knowledge.

Fin, everything you have posted here is rhetoric. You make no points at all that I can reply to. You just do the usual retarded shit and lay out the ad-hominems. Go and look at my background links and see what I actually said. Other wise obey Ludwig Wittgenstein when he said: "Of which one knows nothing, one must remain silent. ;-)

My goodness, Fin. Is this a logical, unembellished, rhetoric-free POINT I see before me?... So it's brand new, released yesterday. I'll be seeing Andrew Johnson live tonight actually. I'll present it to him and see what he thinks.