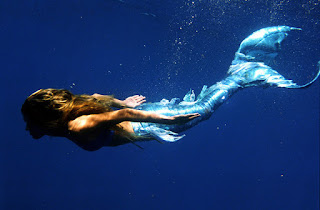 No, this is not an April Fool joke, nor is it fake news. A principle online newspaper in has reported that two young boys have been killed by a freshwater mermaid. The incident happened at a reservoir in the Gokwe township of the province. The two boys were playing around near the dam, in between looking after a herd of cattle, when the mermaid came out of the water and seized them. It took them down into the water but later returned them alive. The boys' parents were among the witnesses. They wept with relief when they saw their children and so the mermaid came back and grabbed them again, this time killing them. According to African folklore, one must never weep in the presence of a mermaid or they become angry. The two deaths are being taken seriously by the police and Assistant Inspector Ethel Mukwende of the Midlands Provincial Police is investigating the incident. Source: http://zimbabwenewsonline.com/index.php/strange_news/3168-a-daring-gokwe-mermaid-snatches-two-boys-and-shows-them-off-before-killing-them.html. As outlandish as this story sounds I still think it is worth looking into. is an absolute cornucopia of cryptozoological, UFO and other paranormal related phenomena. A lot of what happens goes unreported, or is minimally reported, because of the common lack of communications infrastructure that affects the continent. However, this situation is improving rapidly with a huge growth in recent years of the number of Africans who can now access telephone and internet services, so these stories are leaking out more and more. There are many other examples, including these two also from , see: http://hpanwo-voice.blogspot.co.uk/2014/01/goblin-in-suitcase-scares-cops.html and: http://hpanwo-voice.blogspot.co.uk/2014/09/ruwa-ufo-twenty-years-on.html. Mermaids are mythological aquatic humanoids that can be found in cultures across the world in one form or another. In European traditions they're usually depicted as feminine and formed like a normal human from the waist up with a fish-like tail instead of legs. There are still many mysteries associated with the sea and we know more about the outer planets of the solar system than we do some regions of the earth's oceans. In 2013 this mockumentary by the channel Animal Planet renewed interest in the subject, see: https://www.youtube.com/watch?v=dWE4g33dwdI. Of course this was not real, but it was inspired by genuine cryptozoological research by people like the Australian investigator Gary Opit, see: http://garyopit.com/. Is it possible that at some time in our evolutionary past, a species of ape-man decided to take to the water in the same way land animals turned into whales and dolphins? In which case they may still be out there, keeping away from us for fear of our fishing nets and naval engagements. Was it one of these beings that was responsible for the deaths of those two boys in ?
See here for more information: http://hpanwo-radio.blogspot.co.uk/2013/06/programme-51-podcast-cryptozoology.html.
And: http://hpanwo-tv.blogspot.co.uk/2016/08/bigfoot-in-britain.html.
And: http://hpanwo-voice.blogspot.co.uk/2014/08/bigfoot-seen-in-kent.html.
Posted by Ben Emlyn-Jones at 16:48