I'm Banned from a Conference! 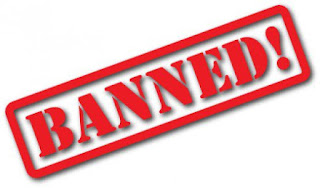 I've been asked by the organizers of an upcoming UFO conference not to attend. This is the first time I've ever been banned from any conference or event on the UFO/conspiracy/paranormal circuit. My conduct within the community has never been a problem; indeed some people have described it as exemplary. I recently bought a ticket to the Outer Limits Magazine conference which will take place in on September the 9th, see: http://chris0597.wixsite.com/outer-limits-mag/conference-2017. Shortly afterwards, one of the organizers contacted me because he was worried there would be trouble. This is because at least three members of the Larry Warren Hate Cult were going and he was afraid an argument would break out between me and them resulting in the conference being ruined, see here for background details: https://hpanwo-voice.blogspot.co.uk/2017/03/the-larry-warren-controversy-part-10.html. This is a legitimate concern; if I were organizing an event I'd be equally worried. I wrote back and reassured the organizer that I would not interact with the LWHC members at all so that we could all simply enjoy the OLM event, the first of its kind. I did ask him to approach the LWHC delegates in the same way he had me and suggest that they cooperate. The response I received was a notice that I would no longer be admitted to the conference. My ticket fee was returned to me via PayPal. The letter the organizer sent me was calm and respectful. He made it clear that this was not a personal slur against my character and he regretted the need to take this action; he was simply worried that good order would not be maintained with me and the LWHC in the same room. I replied:
"Of course the last thing I want to do is put you in a difficult position. Yet I must protest. It was you who first approached me regarding this issue and seeking reassurance. I guaranteed my good behaviour on the day. I was hoping that Larry's enemies would then offer equal reassurances that all would go smoothly and we could simply mutually agree to uphold a level of professional decorum. Don't you want this? If I am willing to do that at my end and they are not then why am I the one being excluded? Have those three said they will cause trouble if I'm there? In which case are they the kind of people you want at the event? Why am I the one getting the talking-to and not them? I realize that this is not a personal slant against me. However, I'm being banned from a conference I really want to attend and hoped to enjoy when I've done nothing wrong. This is a purely personal dispute between me and them. It is not me who wants to spread it out and turn it into some major scandal. All I have done is disagree with these people and write my own online articles countering theirs. Therefore I'd like to appeal. Please could you reconsider?"
I received no reply. I decided wait a while before saying anything publicly in case they did have a change of heart, but it's been over two days now. I honestly do sympathize with the organizers of the OLM conference, but banning me is not the answer. It's unfair and goes against common sense. I was proposing an unconditional twenty-four hour ceasefire for the sake of the conference. I assume from this outcome that the LWHC are not willing to go along with me on that. So why ban me? Why not ban them? As I asked in my reply, is he not bothered that people with that kind of attitude are among the delegation? This is a disturbing new development in the war against Larry Warren. With this victory under their belt the LWHC will almost certainly try to get me banned from other upcoming conferences. Again we see the zealotry of the Truth mob made manifest (see here for background details: http://hpanwo-voice.blogspot.co.uk/2016/09/truth-mobbed-again.html). In fact I have it on good authority that the LWHC are responsible for the cancellation of at least one other meeting within the last year and a half. They did this via attacks against the organizers and even just attendees who announced they were going. They've also lambasted radio show hosts for having Larry or myself as guests on their programmes. They are currently flaming anybody who so much as utters a kind word about Larry. This is a campaign of terror. Nothing matters to them now except the destruction of Larry Warren and if they have to destroy all of UFOlogy in order to achieve this, they will. It's time for the UFOlogical community to stand up together and resist. It's getting very lonely up here on the battlements with just the handful of us currently fighting back! The desire for a quiet life is understandable, but not an acceptable excuse in this situation. It is what is currently keeping too many people's mouths shut. What chance do we have against the keepers of the ET Truth Embargo if we're frightened into submission by a quartet of unimpressive little hashtag pugilists? Despite all this, I don't want to pass any personal condemnation on the organizers of the Outer Limits Magazine conference. I sincerely hope the event goes well and that everybody enjoys it.
See here for more information: http://hpanwo-radio.blogspot.co.uk/2015/12/programme-167-podcast-shill-special.html.
And: http://hpanwo-tv.blogspot.co.uk/2016/06/the-shill-squad-2-ben-fellows.html.
And: http://hpanwo-voice.blogspot.co.uk/2014/12/the-shill-shaming-of-danielle-la-verite.html.
And: http://hpanwo-voice.blogspot.co.uk/2015/01/david-icke-vs-sonia-poulton.html.
And: http://hpanwo-voice.blogspot.co.uk/2014/02/miragemengate.html.
Posted by Ben Emlyn-Jones at 18:17

Would have been a shit conference anyway. Dont think you're missing out on anything apart from a gang of bitches and their followers!

Sorry Ben outrageously unfair. If you are banned then so should they be.

So how many members of the hate club have been asked not to attend ? as clearly there are those who dont voice an opinion but are backing larry all the way...seems its leaning toward the haters ,not good for ufology or their conference criteria

Very sorry to hear this Ben. Why would they bar an honest investigator in favour of a group dedicated to hate? It sounds very unhealthy to me. This is one conference I shall not attend.

hmm this is the event that includes Malcolm isnt it Ben? as you said a few weeks back on your show or here(i forget) you expected to be banned.oh well move on Mate!- Mungoholly

Thank you to everybody who has commented on this article, especially those who have reminded me that you do appreciate me. It means a lot in situations like this. Anyway, as providence would have it, I opened up my email after posting the article and there was an invitation for me to go to a wedding, and guess what the date is! :-) So I'm going to that now instead... unless there's some other guest the couple think I won't get on with.

And this is why ufology is going nowhere. Unless you tow the line and simply agree with the ufo powers that be you get banned. Bloody pathetic let them choke on their lies and bullshit