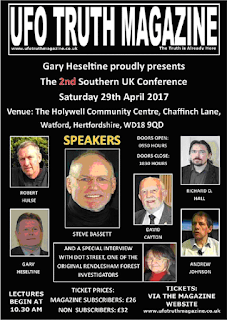 The second of the UFO Truth Magazine Southern Conferences was held at a different venue to the first. Last year it all happened at that well-known UFOlogical country seat High Elms Manor. I was one of the speakers and it was recorded, see: http://hpanwo-voice.blogspot.co.uk/2016/08/ben-emlyn-jones-at-ufo-truth-conference.html. This time booked a different venue, Holywell Community Centre in nearby . This was a much bigger place with over a hundred and fifty seats, yet the event sold out and there were even some latecomers standing at the back. As you can see above, the speakers list includes some of the best researchers and lecturers in the field, including an exclusive talk by . She received one of 's famous trophies for her unique and essential role in publicizing the Rendlesham Forest UFO incident of 1980. I had a stall for my books and was able to sell all nine of the Risings I managed to squeeze into my rucksack. However even that success wasn't the primary reason that this is probably the best one-day conference I've ever been to. The mood of the delegates and the atmosphere was exceptionally inspired and good-natured. The main reason I think, and a lot of other people commented along these lines, was that this conference symbolizes an act of defiance. Larry Warren was there. This is the first event he has attended since the attacks against him that regular readers will be all too familiar with, for example see: http://hpanwo-voice.blogspot.co.uk/2017/04/the-larry-warren-controversy-part-11.html. Almost everybody there greeted him affectionately and he himself was in good spirits. This is a big middle finger to the very small number of internet bullies who are behind all this abuse. There was a level of camaraderie and warmth that was a joy. I'm probably not alone in finding the event a much-needed a healing experience. Afterwards we went to an Italian restaurant for dinner and I stayed overnight at a friend's home in before heading home to in the morning. Thanks to Gary Heseltine and everybody else who organized the UFO Truth Magazine Southern Conference 2017, and to the speakers and everybody who attended.
See here for additional information: http://hpanwo-tv.blogspot.co.uk/2015/10/ufo-disclosure-2015-truth-or-greer.html.
And: http://hpanwo-tv.blogspot.co.uk/2014/08/the-bases-project-conference-2014.html.
And: http://hpanwo-tv.blogspot.co.uk/2015/04/bases-at-barge-2015.html.
Posted by Ben Emlyn-Jones at 16:34