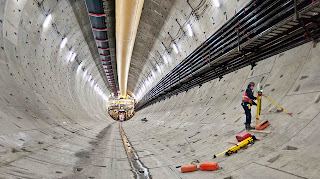 One of the most ambitious civil engineering projects currently running in the world at the moment is the Alaskan Way Viaduct replacement tunnel in State. . This will divert a major road, , from its current route along a 60 year old double-decker viaduct running by the seafront, into a brand new 2 mile tunnel. The tunnel is the widest to be built in recent years, 57 feet, enough girth to accommodate the same double-decker highway that the viaduct currently does, see: http://www.wsdot.wa.gov/Projects/Viaduct/About/Tunneling. In order to accomplish this, the builders have employed the world's biggest tunnel boring machine. Tunnel boring machines are fascinating devices; they're gigantic cylindrical self-contained diggers that move themselves forward through the ground as they bore, rather like a gargantuan earthworm. Behind the digging section are machines for processing and removing the spoil and also installing the artificial structure and walls of the tunnel. The TBM for the project was built in and shipped right across the in several pieces to be assembled in . It's been christened "Bertha" after 's former mayor Bertha Knight Landes. The dig began in July and is due to finish in the spring of 2015. But all has not gone well. Bertha has so far dug just over a 1000 feet of the proposed 9,200 foot tunnel and has had to stop, not for Christmas, but because it's hit an obstruction of some kind that it cannot bore through and was not originally spotted by the surveyors. The engineers are currently investigating what has become known simply as "the Object". There are all kinds of speculations going on among the people of and beyond. The New York Times has suggested, with tongue firmly in cheek of course, that it's a "den of interstellar aliens, see: http://www.nytimes.com/2013/12/20/us/under-seattle-a-big-object-blocks-bertha-what-is-it.html?pagewanted=all&_r=0. Gizmodo has suggested that it's a "lost city or UFO", see: http://gizmodo.com/something-called-the-object-has-stopped-worlds-large-1487090414/@maxread. A lost city might not be too far from the truth, but not Atlantis, itself. It's possible that Bertha has blundered into the foundations of a large building demolished long ago, but surely the architects would have checked for that on the land registry. The strangest things can appear when you dig a new tunnel. The recent London Crossrails tunnel dig turned up some bodies from a mediaeval mass grave of plague victims; doctors had to be called in to ensure that there were no pathogens left alive to contaminate the crews, see: http://news.bbc.co.uk/1/hi/england/london/8574619.stm.

Bertha is currently at a standstill, boxed in behind "the Object" 50 feet beneath the ground. Directly above is the junction of and . So far the project's management, the Washington State Department of Transport, are not saying much except that they don't know what "the Object" is, and they won't until at least after the New Year, see: http://www.wsdot.wa.gov/Projects/Viaduct/Contents/Item/Display/1369. I myself would like to know too because any object large enough to stop the world's biggest tunnel boring machine dead in its tracks, but yet was not spotted by surveyors and is absent from the land registry, deserves some major explaining. As you know, I take the idea of UFO's seriously, and many other things along those lines. What's happening in right now is remarkably similar to the 1958 sci-fi horror TV series Quatermass and the Pit, see: https://www.youtube.com/watch?v=l7JY9xtpCxY. What I predict you will find if there is indeed something extraterrestrial in Bertha's path, or otherworldly in any way, is a sudden silence regarding news stories on the subject. Along with that, local residents will notice strange activity around the end of the new tunnel, with screens being erected to shield the site from the eyes of the general public. Strange people may wander from door to door asking the residents peculiar and intrusive questions. Large helicopters might land behind the screens; again, with not a peep out of the media. There may even be an evacuation of the area with garbled excuses to do with a "gas leak" or an "unexploded bomb". Rest assured I will be keeping a close watch on this incident and will report anything interesting that I find; if there are any HPANWO-readers in the Seattle area who can help me gain information, I'd be very grateful. Until then, Merry Christmas!
Posted by Ben Emlyn-Jones at 00:04

Hey Ben,
Just wanted to wish you a Merry Chrimbo! Have a good one mate.
Carl (The 'Guide)

Thanks, Carl. You too :-) Best wishes for the New Year.
Ben