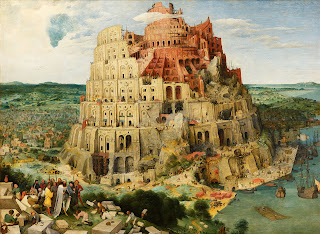 I've always been very interested in linguistics, perhaps because I was brought up multilingually, speaking several languages. My father's family are Bristol Welsh and I was born and brought up in a region of where the Welsh language is dominant. My father's own family has a Welsh-speaking branch too. My mother was a Dutchwoman and I spent a lot of time in the with her family, some of whom spoke Groesbeeks, a rare dialect. Last week I wrote an angry article about the sad decline of so many languages in the world and how infuriated I become when a language or dialect is deliberately suppressed, see: http://hpanwo-voice.blogspot.co.uk/2013/11/linguicide-in-black-country.html. I'm also fascinated by the development of language and so was very pleased when I found this programme, see: https://www.youtube.com/watch?v=N_TmftvAypU; I know I slag the BBC's Horizon off quite a lot, but this one was excellent. In order to understand the history of language it helps to use the evolution of life as a metaphor. Like life, according to the now established Darwinist theory, language constantly grows and changes. It mutates, splits and interbreeds; it has kingdoms, geneses, families, and sub-species. Visualize it as a tree if you wish, as biologists often illustrate the evolution of life. There are limbs, boughs and branches of the tree with are language families, like Indo-European, which includes most of the languages of and the Indian sub-continent. The Sino-Tibetan family includes all the dialects of Chinese, Thai and many others in the . Arabic, Hebrew and many others make up the Semitic family. The Niger-Congo family includes most of those spoken in Sub-Saharan Africa, including Swahili, Zulu and Xhosa. And this continues. Some languages occupy a place on the tree with many others; English, for example, is part of the Germanic sub-branch of the Indo-European branch which also includes German, Dutch, Danish, Swedish and many others. Other languages broke off from the main truck alone a long time ago and have developed independently, like Greek and Armenian. Sometimes branches die out, the dinosaurs of linguistics. Unfortunately some are deliberately pruned, as I explain in the link above. Others don't die, but they transform over time until they only bear a moderate resemblance to their former selves; they evolve into new languages. Latin is one of these; it has never died out at all, it simply became a major branch itself sprouting many twigs of its own like French, Italian and Spanish. 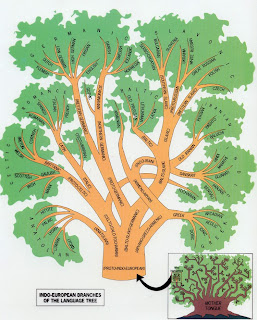 Using this tree diagram of the Indo-European family alone we can see how closely or far away each language is related to all its fellows. For instance we know English, Italian, Norwegian and Gaelic are all related as part of the Indo-European family, but clearly Gaelic and Italian are more closely related than Gaelic and English, even though Gaelic and English are today spoken very closely together geographically; and that English and Norwegian are more closely related than Italian and Norwegian. The goal of linguistic science has long been to categorize every single recorded language ever spoken on Earth, trace its complete origin and its relation to all other languages. If this can be done it will be possible to trace all the human languages on Earth back to a single source from which they all evolved, the original tree-trunk, the "Mother Tongue". This has been difficult because although the root origins of the different families have been worked out, connecting those roots together has been a hard job. There's also the anomalous "orphan languages" like Basque, whose ancestry cannot be obviously seen. However, as the programme shows, linguistic experts have been doing studies which does seem to have provided a universal link which can be applied to all known human languages. This means all the languages spoken in the world today and in historical times emerged from a single language that was spoken in prehistoric times. The title of the show is misleading though, and there's no comparison to the Bible story of the . If this Mother Tongue really did exist then it was definitely not the only language spoken in the world at that time; indeed at the time it was just one twig on one branch of one limb, just like all the languages of today are. It might have been spoken by just one tribe in one small corner of or . There would have been thousands of other languages spoken alongside the Mother Tongue in those days too. What makes the Mother Tongue unique is it's the only language from that era to survive into the modern world. I'm also curious about how this relates to the theories of prehistoric civilization, as postulated by Graham Hancock, Rand Flem-Ath and others. It could be that sophisticated city-building cultures existed at the time when the Mother Tongue was spoken so there could be a contemporary grammar and dictionary of it still in existence, maybe stored secretly in the vaults of the Vatican Library. We may also find in that vault the records of the Mother Tongue's contemporaries now all extinct. Would we find the complete Atlantean and Lemurian lexicon?