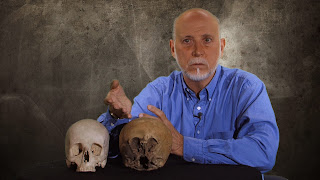 This strange season of bereavement is not over yet. The latest sad departing I have to report is that of Lloyd Pye, see: https://www.facebook.com/permalink.php?story_fbid=10152150591217033&id=214837897032. After battling cancer for many months, Lloyd passed away peacefully yesterday with his family by his side. Lloyd was born in in 1946 and became a keen player of American Football, but it is his research and writing for which he is best known. Along with several fictional novels and plays, Lloyd has been published extensively on the subject of paranormal mysteries, specializing in cryptozoology (See here for more background: http://hpanwo-radio.blogspot.co.uk/2013/06/programme-51-podcast-cryptozoology.html) However his research moved on to a new phase in the late 1990's when he was given a remarkable artefact.

The story begins in 1930 when a teenage girl from was on holiday with her parents in a region of called Copper Canyons because there were once mines there in ancient times and some of the remains of these still exist. The girl entered one of the mine tunnels to explore it and came across a pile of bones partially buried under some loose dirt. She picked some of them up and took them home as souvenirs, there she kept them in a cardboard box in her garage for her whole life. Just before she died in 1999 she gave them to some friends and these friends decided to donate them to MUFON, the Mutual UFO Network, see: http://www.mufon.com/, so they must have realized independently that what the girl had found was out of the ordinary. MUFON then decided Lloyd Pye would be the best man for the job of investigating this mystery and so he did. Because the bodies had been buried in an underground tunnel they had not been exposed to wind and rain and so were in excellent condition. Using radio carbon dating Lloyd discovered that they had died about nine hundred years ago. He found out that the bones were of two individuals, one was a completely ordinary adult woman of average height and build, however the other skeleton was much smaller and described as "deformed". Unfortunately most of the bones had been lost in a flood just after the girl found them, but both skulls were recovered; the skull of the second individual was like nothing Lloyd had ever heard of before. Firstly, it was completely the wrong shape; and secondly it was not made of normal bone. Lloyd discovered that it was made of a completely different substance that is more like tooth enamel than bone. There are numerous other anomalies that Lloyd has described in detail in his published works. In the preceding years Lloyd has organized a number of tests on the DNA of the skulls, see the links at the bottom of the article. It turns out that the larger female body was an ordinary human whose genetic marker was native Mexican, exactly as one would expect a local woman to be. However the smaller body had a DNA signature that has never been seen before on Earth. It has a human mother, also a local woman, but not the woman lying beside it in the mine. However its father's DNA is something completely different to any other known form of life on Earth. Despite its size, the being was in fact an adult, as Lloyd could tell by its teeth, but the name has stuck: "Starchild". Here's the websites of the research on the Starchild: http://www.starchildproject.com/ and: http://www.lloydpye.com/index.htm. Lloyd dedicated every moment he could to researching the Starchild, writing about it and travelling the world presenting lectures on the subject. I've seen his live lectures twice, in and . Here he is giving a presentation at the first Leeds Exopolitics Expo, see: https://www.youtube.com/watch?v=AGwn8GTIX04. Predictably the Skeptics have tried to head him off at the pass, as they always do. The Skeptic neurologist and radio show host Steven Novella claims that the Starchild is nothing more than an ordinary human suffering from hydrocephalus, a condition in which the interior of the skull fills up with excess cerebrospinal fluid causing the head to expand like a balloon; and he accuses Lloyd of pseudoscience and fallacy. Lloyd has stridently, comprehensively and categorically discredited Novella's tall story here: http://www.lloydpye.com/lloydpyenovella.htm. Lloyd was never the type to suffer fools gladly.

Lloyd lived to see many of his theories proved true by scientific analysis, but the Starchild Project is not yet over. More tests need to be done in order to unravel exactly what the Starchild is. And maybe then we can address more questions, like where did it come from? What was it doing on Earth? Are there any more bones of Starchildren waiting to be found? Are there any still alive today? The answer to all these questions is within our grasp and the quest to answer them will be continued by Lloyd's friends and colleagues. We could be looking at positive proof of the presence of extraterrestrial creatures on planet Earth. If we find that proof then the man we will most have to thank for it is Lloyd Pye. Rest in peace.
Background articles: http://hpanwo-voice.blogspot.co.uk/2010/08/starchild-skull-dna-test-results.html.
And: http://hpanwo-voice.blogspot.co.uk/2010/04/starchild-skull-dna-extracted.html.
And: http://hpanwo.blogspot.co.uk/2013/04/ammach-conference-2013.html.
Posted by Ben Emlyn-Jones at 14:18