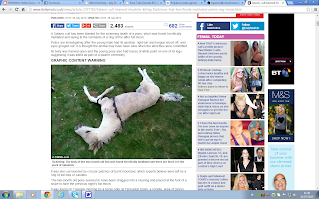 The Daily Mail has published an upsetting article about the mysterious deaths of a number of ponies, see (WARNING- disturbing content): http://www.dailymail.co.uk/news/article-2377782/Satanic-cult-blamed-ritualistic-killing-Dartmoor-foal-horrifically-mutilated-centre-ring-moon.html. The article blames these attacks on a Satanic ritual cult in the area. It sites certain evidence, such as the presence of burnt circles of grass and that the attacks occur on Pagan holidays. However there is another possibility which the article does not mention, but I think makes much more sense: These unfortunate animals were the victims of the "mysterious mutilation" phenomenon. The nature of the injuries, the body parts removed and the lack of visible bleeding all point towards this theory. Linda Moulton Howe was the first investigator to raise public awareness of this horrific enigma, see: http://www.youtube.com/watch?v=qJ_PiRVyXhM. Since then many others have followed, like David Cayton, see: http://www.youtube.com/watch?v=t-tXOKDqthc. No proposed explanation for animal mutilations so far has come close to being adequate. It's not being done by people involved in a secret government medical experiment, that's for sure; if it's being done by alien beings from another world then why on Earth are they doing it? I don't agree with LMH's genetic harvest hypothesis; you can easily obtain DNA from a strand of hair or single skin cell. There's no need to do what is being done to these beasts, unless there's something about DNA we have yet to discover. We're a very long way from getting to the bottom of this, but it is happening, that's inescapable, and it needs to be reported accurately in the media.
See here for background: http://www.youtube.com/watch?v=byaOf5rXrWo
And: http://hpanwo.blogspot.co.uk/2012/12/mirage-men-by-mark-pilkington.html
And: http://hpanwo.blogspot.co.uk/2008/04/uk-probe-conference-march-08.html
Posted by Ben Emlyn-Jones at 11:45