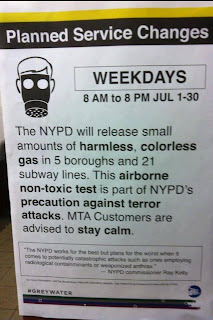 At the moment in , an experiment is taking place which will involve the release of gas in the city's underground urban railway network, the Subway. See: http://www.nytimes.com/2013/04/25/nyregion/police-to-disperse-gas-to-see-how-it-would-flow-in-terror-attack.html?_r=0. This gas is called "perfluorocarbon tracer" and is invisible, odourless and said to be harmless. The objective of the study is to see how gas travels inside the tunnels of the system. This is so the police and emergency services have a better idea of how much damage a terrorist attack using gas might have; such an attack has taken place in the past, on the underground railway in 1995. There are two concerns I have with this operation. Firstly real terrorist attacks have a habit of occurring during actual terrorist attack drills, as with 7/7 and 9/11. Secondly, the last time the authorities in America did experiments involving dumping chemical or biological weapons on its general public it resulted in tragedy: http://rense.com/general15/ofMicrobesandmock.htm. Here's an episode of The Mind Set Podcast where we discuss this issue; see here at 52.50: http://www.mindsetcentral.com/archives/12198.
(Edit 20.16) I've just found out that simultaneous drills are going on with the London Underground: http://www.bbc.co.uk/news/uk-england-london-22901700
Posted by Ben Emlyn-Jones at 19:34