"Work Experience" for the Unemployed 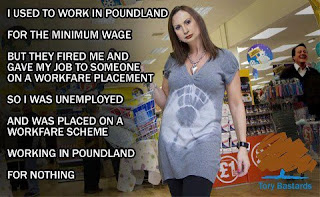 From the dawn of the welfare states, in most countries, it has been suggested many times that unemployed people should be forced to do unpaid work on state-controlled labour schemes. For over fifty years these schemes were suggested, trialled and cancelled; this was because of their enormous practical and ethical drawbacks, yet in the last few years in the UK the current government "work experience" schemes have been pushed through much more vigourously and have now sadly taken hold. This is one of the many previously unthinkable changes in society that have somehow become acceptable and normal in recent years. This comes at the same time that Iain Duncan Smith, the Work and Pensions Secretary interviewed in the news clip, see: http://www.bbc.co.uk/news/uk-politics-21490542, brought in a cap on benefits; also he's contracted a company called Atos Healthcare to carry out "Work Capability Assessments" on people receiving sickness and disability benefits, in order to "streamline" the means testing for these benefits. This has resulted in many people being forced to find jobs that they may not really be fit to carry out. The injection of unpaid labour into the workforce can also cause terrible problems that I detail in the background links below; in brief: some employers are now creating vacancies specifically for unpaid "work experience" placements. This means they could easily end up making their own properly employed staff redundant to create these posts. If this situation spirals, then unemployment itself will not only increase, but working life in will be changed forever by an entire new sector of civic slaves... and it's not an exaggeration to use that word.

These policies are also deeply insulting to unemployed people, as well as being based on a myth. Despite the undeniable and very simple fact that the declining number of available jobs is causing this unemployment, (It's what always causes unemployment, duh!) the idea that there is some kind of massive underclass of "welfare kings", unemployed by choice, living in everybody's street, bleeding the country dry of taxpayers' money, has not gone away; what's more it's encouraged by certain newspapers. The theory behind this falsehood is: if only we could make life as uncomfortable and painful as possible for people receiving benefit then they'd all go out, get on their bikes, and take all these non-existent jobs; and then there would be no unemployment. Presumably when the work situation picks up these people all magically recover from their laziness, do they? Amazingly the people who complain about "lazy dole scroungers!" often shrug nonchalantly at the trillions of pounds given to the banks in 2008, a greater drain on the public purse by a multiple factor. Very few people indeed choose to be unemployed; in fact in this day and age you'd need to be a masochist to do so. You don't only get far less money nowadays, but unemployment has been virtually criminalized. The Job Centre now has security guards and assessment staff who must have been trained to be cruel and rude. It is vital that we don't fall for the propaganda demonizing people out of work. If not we will further ruin the economy, destroy millions of people's live and let the real guilty party get away with it again.
Important background links: http://hpanwo-voice.blogspot.co.uk/2010/11/slavefare.html
And: http://hpanwo-voice.blogspot.co.uk/2012/05/slavefare-in-hospitals.html
And: http://hpanwo-tv.blogspot.co.uk/2011/04/get-job-you-lazy-scroungers.html
Posted by Ben Emlyn-Jones at 18:16