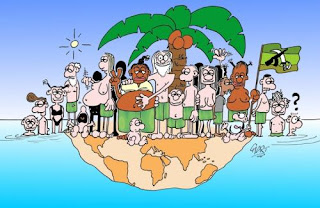 It's been announced that the Earth's human population has reached seven billion people, see: http://www.bbc.co.uk/news/world-15391515, although this is an estimate. Nobody knows the exact figure; we can only go by the registry offices of the world's nations gathered by United Nations officials; and there are thirteen countries from which no birth and death records have been submitted, including , , and the Dutch Caribbean. There are also political reasons why any data will be interpreted as liberally as possible by the UN Population Division, see: http://www.un.org/en/development/desa/population/. The reasons are that those who wish to change the world according to their plans want us all to perceive the world as overpopulated; we will then agree to governmental control measures, see: https://www.youtube.com/watch?v=rkXT_DXUy08. But it is all based on a lie; the world is not overpopulated at all, see here for background: http://hpanwo-tv.blogspot.co.uk/2011/01/erik-pianka-and-overpopulation.html.

Environmental activists have changed in recent years. Rather than having beards and woolly hats they wear smarts suits and ties; and they no longer sail boats into the paths of whaling ships, they sit in locked boardrooms and speak in hushed voices. Here they plot ways of killing the majority of people on Earth. They have a respectable public face of course; like good old David Attenborough, everybody trusts him! See: http://hpanwo-voice.blogspot.co.uk/2012/07/bbc-horizon-why-most-of-us-need-to-die.html. And Bill Gates, that wonderful philanthropic industrialist who gave us personal computers, see: http://www.youtube.com/watch?v=WUJMR3BUm2s. But in the boardroom they secretly know, or think they know, that what's being said publicly is too little too late; "We have to actively kill 'em!" The sad thing is that most of the men in the boardroom are not evil people, they're just people who believe that the only way to save the Earth's environment from destruction is to do desperate and extreme things. This can be achieved through forced sterilization, and the engineering of artificial disease to shorten the lives of those now living; the restructuring of the natural environment of the planet, genetically modifying the human body and domestic animals and plants, and the reconstruction of political and economic society, a New World Order. They may well mark this seven billion milestone with a new offensive in their schedule. That is why it is so important to speak out against the overpopulation myth, because that's the cornerstone of the entire agenda; once that's gone nobody will believe the rest.
Posted by Ben Emlyn-Jones at 11:37