The Secret Life of Uri Geller 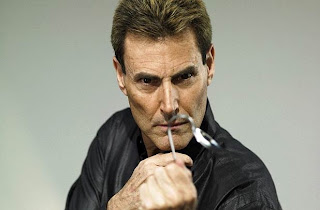 The BBC have broadcast one of the most remarkable programmes I've seen from the Corporation in years, it concerns the celebrity performer Uri Geller. It's called The Secret Life of Uri Geller, see: https://www.youtube.com/watch?v=9G9F2K-vMv8.

Uri Geller is the biggest paranormal celebrity the world has ever seen. He emerged in Israel in the early 1970's and quickly became a worldwide household name as a magician; his favourite tricks were bending metallic objects with his bare hands, usually cutlery, and reproducing drawings he supposedly couldn't see on stage in front of hundreds, and on TV in front of millions. Through his fame he quickly made his fortune. But there's a secret side to his life, one that is already well-known among alternative researchers, but has up till now been stringently deflected from the mainstream public consciousness. The truth is that Uri Geller is far more than just any old stage conjurer; he has been involved in psychical research and classified government intelligence operations for over forty years in at least two countries. This programme portrayed a side of Uri Geller I never thought existed. In his brief appearance on What the World Thinks of God he claims that "killing is wrong; I've done it and I know", see: http://www.youtube.com/watch?v=7loVKa9fRs4, yet in the title documentary he comes across as a staunch Zionist. "My love for the Jewish nation was embedded because of that war." (I do not use the word "patriotism" or derivatives thereof, when it comes to Israelies because I don't consider to be a legitimate sovereign state, least of all a "Jewish nation". On the contrary, I denounce it as an aberrant and unlawful fiefdom. I think I would be much less hostile to its existence if it wasn't one of the most brutal regimes in the modern world). The fact that he was a member of the Israeli Defence Force and happened to be mobilized for one of the Arab-Israeli wars is not relevant because Israel has always had a policy of national conscription; all Israeli men will have at some time served in that Zionist fiefdom's "defence" militia. What makes me realize this, is partly his rhetoric during his interviews for this programme, and also his revelations that he was (is) an agent of Mossad. Not only that but he has also been involved with research for the American CIA; this is not completely secret and has been explored before. Several books have been written on this subject and several TV movies made, EG: http://www.youtube.com/watch?v=lERbTkN82go. In fact in John Ronson's book The Men who Stare at Goats the author describes a meeting with Geller in which he says words the effect of: "I've been reactivated! If you tell; anybody I'll simply deny it!" This is a strange turn of affairs after the Skeptic Movement have universally denounced Geller as simply an exceptionally successful conman, preying on people's ignorance and gullibility, see:  http://www.youtube.com/watch?v=M9w7jHYriFo. So why have entire government departments on a budget of millions in many countries been devoted to researching this subject? I'm well aware that James Randi considers himself the one and only real paranormal investigator on Earth and that all of his peers are white-dressed, flower-wielding "gullibles" that he can look down his nose at; but the fact of the matter is that top Stanford Research Institute scientists, supervised by the CIA, Hal Puthoff and Russell Targ, did thorough studies on him and disagreed, see: http://hpanwo.blogspot.co.uk/2012/02/other-side-of-james-randi.html. There was also some concern among them that the Israeli Mossad had not released Uri from their clutches just yet. Their work is part of the very long and ongoing relationship between the supernatural and warfare, see: http://hpanwo.blogspot.co.uk/2013/05/helen-duncan.html. The BBC programme above is obviously going to contain elements of ridicule; for instance the musical consultants chosen for this show included the theme music of James Bond, Mission Impossible, The Twilight Zone, Monty Python, Doctor Who, and... of course!... The X-Files, in the score. What is certain is that the paranormal warfare project expanded into a massive multi-departmental operation involving NASA and others. People like Maj. Ed Dames and Ingo Swann were involved, see: http://www.youtube.com/watch?v=3Wm1RNZkqZI. But there is some truth behind the various layers of flannel. The superpowers in the Cold War did indeed research supernatural abilities and indeed, as Uri suggests, Mossad did too. What has been revealed so far is supposedly the "whole story" of the and/or Soviets supposed folly of launching a scientific project on this subject. But the truth runs far deeper; as long ago as Word War II, government forces were closely monitoring psychic mediums and taking action against them if the circumstances require it, see the above link about Helen Duncan. I find it unlikely that there would be a big fuss over whether or not IDF planes flew over or not during the operation. As with the 1986 bombing of Lybia, it would be a simple matter to fly round a particular airspace as the USAF flew around .

Col. John Alexander seems to be as a crucial a lynchpin in the complex morass psychic spying has become as Uri Geller. He has since been a welcome guest at many UFO, paranormal and anti-NWO Conferences; billed as a supposed "whistleblower speaking out". On the surface he seems to be one of the "insiders on our side", like so many others. But what bothers me is he has been involved in somewhat suspicious activities that make me wonder if he really is a "renegade" at all. He's been less than helpful in regards to Dr Judy Wood and John Hutchison, see: http://www.checktheevidence.co.uk/cms/index.php?option=com_content&task=view&id=350&Itemid=60. Is he just another of these people who have come to us and asked for a platform as the "one who has been one of 'them', and now wants to be one of 'us'"; why? Conscience and a sense of duty? Maybe they're nothing more than another lure to distract us from the real truth. The emergence of this new BBC documentary as well as bestselling books promoted by The Guardian should cause us concern. I'm especially bothered by the fact that John Ronson's book has been adapted into a movie: http://www.youtube.com/watch?v=GC2TzspJn5A. Why would the very institution that wants to keep secrets then go and encourage attention towards it?
Posted by Ben Emlyn-Jones at 01:10