Shakespearean Humanoid to Star at 2012 Olympics 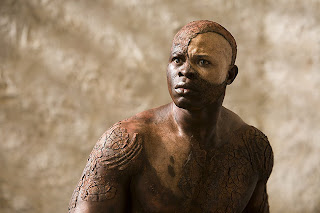 I’ve received some information from a friend and fellow researcher on one of the segments of the Opening Ceremony of the London 2012 Olympics which is due to take place on July the 27th. It involves the ringing of a huge bell and the reciting of a mysterious speech from Shakespeare’s play The Tempest. The character is Caliban, a strange humanoid, reptilian fish-like being. This is sinister because children will be involved. I’ll be interested to hear what Ayem finds out from the bell’s manufacturers. Here’s her report in full:

Okay - Is it just me or does everyone else ‘see’ what’s going on here?
Yesterday’s announcement of the ‘news’ that the official opening ceremony of the London 2102 Olympics will commence with the ringing of a 27-ton bell – (that’s twice the size of Big Ben) inscribed with a line from Shakespeare's The Tempest: "Be not afeard, the isle is full of noises." – Literally made me shiver!

My skin crept too, when I went on to read that during the ceremony –

“Up to 900 children, aged seven to 13, from the local Olympic host boroughs are also set for a starring role in the London 2012 ceremonies.”

I bet they are! (Note the age of the children - all pre-pubescent)

This proposed ceremony – or ‘Ritual’ is just steeped in symbolism – and subliminal Mind-Control.

Just that line alone, inscribed upon the bell - refers (in my opinion) to a far greater - and deeper meaning.

“Be not afeard; the isle is full of noises,
Sounds, and sweet airs, that give delight and hurt not.
Sometimes a thousand twangling instruments
Will hum about mine ears; and sometime voices,
That, if I then had waked after long sleep,
Will make me sleep again: and then, in dreaming,
The clouds methought would open, and show riches
Ready to drop upon me; that, when I waked,
I cried to dream again.”
William Shakespeare - The Tempest

In The Tempest the character Caliban is said to be a hideous, monstrous being - a representation of - part fish, part beast, part man - the ensuing result and offspring between his mother, - the witch Sycorax and the Devil himself.

Additionally, scholars believe that the character's name Caliban is said to be an anagram of the word cannibal -

Here's a couple of depictions of Shakespeare's Caliban. (Above at the top of the article- Ben)

This gargantuan 27 ton bell which will be used in the opening ceremony, (inscribed with Caliban's quote from The Tempest) is deeply significant - especially because of how Vibration, Tone and Harmonics affect the physical body (and our DNA) as well as our consciousness.

The frequency of a bell's note varies with the square of its thickness, and inversely with its diameter.

I was curious to know more about the note of the bell, so earlier today, I tried to contact the bell's manufacture - The Whitechapel Foundry in London - to see if they could tell me which tone and therefore which Frequency the bell will emit. That way, I can discover the impact that this will have, in terms of it's Harmonics. Alas, they're closed on a Saturday but I look forward to seeing what sort of feed-back I receive. If however, they tell me that this is information which they don't wish (at this point,) to disclose, then I won't be at all surprised.

Remember too that in days gone by - bells were used to communicate to people 'en masse' - or for ritualistic, religious gatherings, or 'mass.'

Here's a quote about the bell which is being used in the opening ceremony from The Telegraph.

"A one-million-watt sound system will be fitted to allow the 80,000 spectators and one-billion-plus TV viewers to enjoy music from techno group Underworld."

(Note the name of the 'techno' group - Underworld - Co-incidentally, the group are friends and former collaborators on earlier films - with the Director of Opening Ceremonies, Danny Boyle)

There'll be tons more to come out, I'm sure - and way before the opening ceremony date.

Just the brief references I've made here to just a few of the plans - smacks to me, of so much more of what's really planned in terms of mass-hypnosis and distraction - all hyped up under the banner of the Olympics - to forward more sinister agendas.

It's so easy to do this - when the head's distracted and the heart's not open - Piece of cake .

Interesting.
Did you finally discover what note the bell played ?
(I didn't even watch the Games at all, so I had no idea "Caliban" was in there... Poor Caliban. Used, used and re-used...