Interstellar Asteroid is Speeding Up 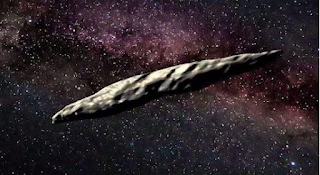 The world of astronomy was taken by storm when 'Oumuamua was discovered in October 2017. I covered it extensively myself during the Space Weather reports on the HPANWO Show, for example see: http://hpanwo-radio.blogspot.com/2017/11/programme-258-podcast-brian-clare.html. 'Oumuamua is a large solid object in space, an asteroid, but it is unique because it is not in orbit around the sun. It is a wanderer through interstellar space that just happened to have passed through the inner solar system by coincidence. Its name means "leading scout" in Hawaiian. It quickly became clear that this object was highly unusual in many other ways. Most asteroids are round or irregular lumps coloured grey or black; this one was very long and thin, shaped like a cigar about a thousand feet long and a hundred wide. It was dark red in colour, possibly as a result of countless aeons of being exposed to cosmic radiation. It was spotted by the Pan-STARRS telescope on and the only photographs we have of the object are some grainy and low resolution shots showing light streaks. This is because its closest point of approach to the earth was nine million miles, that's about thirty-seven times as far away as the moon; it was also unfortunately well past that point when it was first spotted. It is travelling at over thirty miles-per-second relative to the sun, that's well over three times the average speed of an orbiting asteroid. This is why the astronomers knew it had to be interstellar; it was moving too fast to be in solar orbit. NASA and other space agencies have discussed the concept of a hypothetical mission to explore 'Oumuamua, but this will be very difficult because of the object's speed. It is heading away from the solar system out into deep space and is already past the orbit of the planet Jupiter. In just four years at its current velocity it will pass the orbit of the planet and then be officially outside the solar system. However, it's a bit more complicated than that.

It has just been announced that 'Oumuamua is speeding up. This should not be possible. An object cannot accelerate in space unless it enters a gravitational field, the "slingshot effect" or if it slows down (this is still termed "acceleration" in astronomy) due to friction with something, like a planetary atmosphere. The only exception to this rule is for... ahem!... something with its own propulsion system. Naturally when 'Oumuamua first hit the news the question was tabled about whether it could be artificial. Its shape and speed reminded many people, including me, of Arthur C Clarke's sci-fi novel Rendezvous with Rama, which is all about an alien spacecraft that visits the solar system and is explored by a team of astronauts. The Breakthrough Listen programme got to work observing 'Oumuamua. This is part of the SETI movement, see background links below. It examined the asteroid with the high-power Green Bank radio telescope in West Virginia USA to see if it was emitting any radio signals. The object was totally silent during the entire duration of the study. However, now 'Oumuamua is speeding up, it might be worth repeating the observation. It might be a spacecraft that has been in "standby mode" previously and is now switched on. In another of Clarke's stories, The Fountains of Paradise, earth is visited by an unmanned (or should I say "un-alien-ed") probe, dubbed "Starglider", from an extraterrestrial civilization; and it behaves in a very similar manner to 'Oumuamua. According to the media, the most likely reason 'Oumuamua is accelerating is because it is really a comet. Comets do change speed and course at times because of the "outgassing" process. This is where ice inside the comet melts and evaporates creating water and steam jets that burst out through the object's surface and act like rockets. This is what causes the "coma"; the tail of the comet is made up of this material. Source: https://www.standard.co.uk/news/interstellar-object-oumuamua-is-unexpectedly-speeding-up-leaving-nasa-scientists-baffled-a3875736.html. The certainty of the solution to this mystery varies depending on the media spot; as you can see the Evening Standard states that NASA scientists are "baffled" whereas Astronomy magazine takes a far more conservative stance: Speeding Interstellar Object ‘Oumuamua is a Comet, not an Asteroid, see: http://www.astronomy.com/news/2018/06/speeding-interstellar-object-oumuamua-is-a-comet-not-an-asteroid. In that case though, why was it not identified as a comet sooner? Why is the assumption that it is a comet only being suggested now because it is, frankly, the only explanation that does not involve mentioning little green men? It is odd that this comet has suddenly started outgassing now that it is heading away from the sun and is already more distant that Jupiter. Comets usually begin this as they approach the sun; that is why their tails are longer and brighter there. Sometimes the earth's orbit passes through these tails and we get meteor showers. As comets leave behind the hot vicinity of solar space, the remaining water inside them freezes and the outgassing stops. Why did 'Oumuamua not outgas when it was closer to the sun, lighting up the night sky on earth with its magnificent interstellar tail? I hope Breakthrough Listen does take a second look at this most enigmatic of objects. If it turns out that it is electromagnetically active as well as in motion then we will have irrefutable confirmation that we are not alone.
See here for background: https://hpanwo-tv.blogspot.com/2018/02/seti-and-ufos.html.
And: http://hpanwo-voice.blogspot.com/2016/08/real-contact.html.
And: http://hpanwo-voice.blogspot.com/2016/04/mysterious-star-update.html.
And: http://hpanwo-voice.blogspot.com/2012/11/bbc-blocks-brian-cox-over-alien-fears.html.
Posted by Ben Emlyn-Jones at 15:52