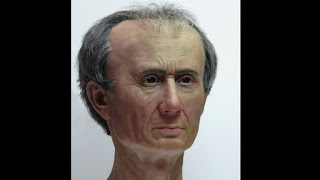 Julius Caesar is the most famous name in Roman history. He was born in what is now in 100 BC to an elite family of the . He rose through the ranks of the army to become a leading general. He was also a prolific writer and historian. A lot of what we know about Iron Age comes from him. Caesar waged numerous wars of conquest against neighbouring territory to expand Roman rule as far as he could. His greatest achievement was his victory in the Gallic Wars where he conquered the land which is today . In true Illuminati fashion, he forced the defeated French leader, Vercingetorix, to endure a humiliating ritual, throwing his weapons down at Caesar's feet. He also invaded (No Boudica moment now; the actual conquest happened a century later under the Emperor Claudius.). After his military campaigns he returned to across the River Rubicon and took power as the first Roman Emperor. He was assassinated by a conspiracy at the "Ides of March", on March the 15th; 44 BC. As one of the most famous and powerful people in the world, there were plenty of artistic images made of him during his lifetime and afterwards. Romans were particularly good at stone sculpture and there are many statues and busts of Julius Caesar. There are numerous descriptions of his face and voice from those who knew him; but in the days before photography, for those who came after him the question of what he truly looked like can never be answered in full.

Nevertheless an anthropologist and archaeologist called Maja d'Hollosy thinks she has answered the question. She has done this by scanning a marble bust of Julius Caesar and adding in comparisons of other artistic depictions of the man to produce a 3D assembled image of the closest estimate possible to what he looked like. This is not as accurate as the method used to recreate faces from skulls, as was recently done when Richard III's skeleton was found, see: https://www.theguardian.com/uk/video/2013/feb/05/king-richard-iii-face-recreated-skull-video. Caesar's body was unfortunately cremated so we have no skull to work with. However, the rendering by Maja d'Hollosy is extraordinarily detailed. It shows a man with the prominent nose Caesar was said to have had; other than that it is a fairly ordinary face. What is remarkable about him is the shape of his head. The upper cranium appears much larger and wider than usual. We know that Caesar suffered from epilepsy and at one point caught an illness that sounds like encephalitis caused by a tapeworm infestation; however he did not have hydrocephalus or any of the known conditions that cause brain damage or deform a human skull. A colleague of d'Hollosy's, Tom Buijtendorp, believes this strangely-shaped head was caused by his difficult birth. Contrary to popular belief, Julius Caesar was not born by Caesarean section; this refers to one of his ancestors. Source: https://www.rt.com/news/430659-caesar-head-reconstructed-rome/. It is true that difficult or prolonged births can cause newborn babies' head to warp into a highly unusual shape, but it returns to normal soon after birth. In order to permanently alter the shape of a person's skull, their head had to be artificially constricted in the first couple of months of life, before their skull bones are fully sealed; this used to be done in some cultures, such as ancient . An alternative possibility is that Julius Caesar was in fact not a human being, at least not completely. This astonishing notion is more plausible than it looks at first glance. Many ancient cultures produce images of royal personages as having highly bizarre features, especially weird-shaped heads. Ancient Egyptian pharaohs often look like that in sculptures and reliefs, see: https://www.ancient.eu/image/3451/. Ancient mythology from all over the world speaks of the ruling classes of human society being carefully cultivated and maintained bloodlines with ancestry that included "sky gods" or "those who came down to the earth from the heavens" etc. The best known of these legends is found in the Bible; in Genesis 6:4 where we see the line: "There were giants on the Earth in those days, when the sons of God saw that the daughters of men were fair and took of them many wives who gave them many heirs. These then grew into the men of might and renown". Could Julius Caesar be an alien hybrid, a creature that is partly human, but also with some of its genetics coming from an extraterrestrial source?
See here for more information: https://hpanwo-voice.blogspot.com/2016/02/the-starchild-skull-and-twin-towers.html.
And: https://hpanwo-voice.blogspot.com/2013/12/lloyd-pye-dies.html.
And: http://hpanwo-radio.blogspot.com/2016/09/programme-203-podcast-maria-wheatley.html.
And: https://hpanwo-voice.blogspot.com/2017/05/roswell-slides-update.html.
Posted by Ben Emlyn-Jones at 17:25

Hiya Mate, Ben! I love this blog and I'll just say how gutted I was to miss you Dreaming Saucers conference; I had to go to Malta for my job. Funny that, have you ever been to Malta? It is full of loads of sign and symbols of the Knights Templars. If I were you I'd keep a keen eye on Malta. I had to help engineers in Victoria on the island of Gozo. If was interesting when we went into the ancient sewer system. Anyway, did you know that there is a plaque on Walmer seafront that tells you that that point was were Julius Caesar first come aground on Britain?

Hope you do another conference soon.

Hi Aiden.
didn't know that about Caesar. Thanks. Glad you enjoy HPANWO and thanks for the info on Malta. All the best.
Ben