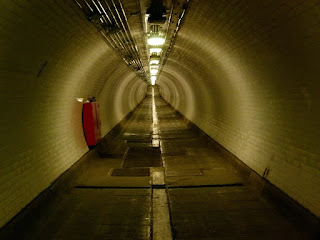 One of the oldest and most famous underground crossings of the River Thames in is the Woolwich Foot Tunnel. It was opened in 1912 and runs under the river from the forecourt of the Waterfront leisure centre in Woolwich to in Newham. It is 1,654 ft long but only wide enough for pedestrians and cyclists, pushing their cycles; riding is not allowed. It has suffered numerous technical problems over the years and was shut completely in September 2010. This was supposed to be for one year only, but in the end this stretched to over two years. The reason for this closure, the council said, was to carry out essential repairs to stop the tunnel leaking. However, according to a local researcher, there could be another, covert, motive for this closure. They claim to have interviewed a builder working on the refurbishment and he told them a dark tale. It seems there was some kind of space-time anomaly inside the tunnel, a portal. Time ran at a much faster rate down in the tunnel. In fact a worker could walk across the entire length of the tunnel almost instantly. This led to some strange antics among the builders; some of them fun and some of them serious. They caused the site manager stress by calculating the extra pay for the additional time they spent inside the portal, which far exceeded their actual measured time in the normal world. At one point some of the men decided to carry out an alarming experiment that almost led to a causality paradox, an incident that is theorized might split the universe in two. Since the tunnel reopened there have been no strange experiences reported and the portal is believed to be inactive, see: https://portalsoflondon.com/2017/07/02/the-woolwich-anomaly/. I still feel another HPANWO TV outing coming on.
See here for more information: http://hpanwo-tv.blogspot.com/2015/05/stargate-brighton.html.
And: http://hpanwo-tv.blogspot.com/2011/09/gateway-to-parallel-universe.html.
And: http://hpanwo-voice.blogspot.com/2015/10/sky-city-in-china.html.
And: http://hpanwo.blogspot.com/2008/09/flatland.html.
Posted by Ben Emlyn-Jones at 18:50

The World Cup. Putin. Trump and Kim Jong Un. Grenfell. Brexit. Spanish PM. The Queen and Meghan even FFS! So HPANWO decides to go with this waste of news. Have you not heard of Occam's Razor? In fact I don't know what is worse actually: You belatedly badly reporting current affairs patronizing everyone with simple facts and ending on some shitty bespoke conspiratorial slant, or posting non-entity crap like this? Is there a portal in Oxford by any chance or is that just your massive Tradesmen's Entrance you can see on Google Earth?

Hi Ben, I felt quite excited when I saw this blog. I have been through that tunnel when my folks took us on a lovely day out to Greenwich and the Meridian line. I think I was about 14 and when we went through the tunnel I stopped to tie my shoe lace up and my parents and younger brother carried on. Then the lights went out for maybe 3 seconds and I was terrified and adrenaline rushed through my veins. Then the lights came back on and I was alone in the tunnel, my family had gone, vanished. Then I started to get upset before the lights went out, 3 seconds again and when they came back on my family as there too. I tried to explain what had happened by my dad just joked and said it was probably because of it being a long day. I accepted that explanation, but what if my parents worked for he NWO. They were trying to do my head in. But...what medication then bedtime, can't I spend another 10 minutes please nur....

I love your research Ben. Truly awesome. Thank you

My mate and I used to play football down there, and because we couldn't see the sky or tell the time and not allowed to ask strangers for the time we just played football until our dads dragged us home, or to Plough Lane if it is was a Saturday or a Tuesday.

Nothing spooky happened though. Or am I thinking about the Dartford tunnel? Anyway, it was one or the other.

Bilic, you fancy me don't you. Admit it! Are you male or female? ;-) As it happens I have covered all those other topics as well as paranormal ones, so you are misrepresenting me grossly.

Corkwise, it must be Woolwich. Dartford is a road tunnel.

Silky, that's an interesting report. I doubt if your parents work for the NWO; far more likely it's a genuine paranormal experience.

Hi Ben, thank you so much for responding. My mum does work for the NWO I have just seen her latest payslip. Net pay £1666 Ned's Welding Operation!

And my dad went to Tavistock for a holiday when he was a kid. He stayed in the Century Hotel, or was it the Cenotaph Hotel, oh I don't know probably Hotel Centaur or something.

Cheers, although I don't think it was paranormal I think it was to do with levels of dopamine in my brain at the time.

Ben, why don't you talk about your implant more often? Also, I'm really upset that you haven't explained more about you being an alien trapped in a human body that you mentioned at the beginning of your Probe vlog, I think. But you were in Birmingham at the time. I am starting to think you were using clickbait to make people listen to the whole thing hoping you would elaborate more on your opening gambit. This has really disappointed me and I find it distressing that someone like you could try to hoodwink people. If you are genuine then fair enough but please just let us know a bit more, please, Ben.

Hi Ben, my friend Luke was convinced he'd been abducted by aliens up near Hebden Bridge. He was aged around 21 at the time and sadly no longer with us. His personality changed dramatically. He claimed that aliens had implanted his brain and had a small scar on his scalp which he said was proof. It was quite extraordinary because he seemed to have developed telepathic powers after his claimed abduction. I might be thinking of something random when I was with him and he'd suddenly blurt out "yes Teddy was a good dog wasn't he and it was your fault he bit your nose" I had had a fleeting thought of a childhood pet whom Luke knew from many years before and yes my exact thought was when I was teasing Teddy and he bit my nose. That kind of thing happened a lot and I eventually renounced his friendship as I always thought he could read my thoughts. Luke was eventually diagnosed with paranoid schizophrenia and hospitalised. He was later released but sadly took his life. It was said he couldn't bear the chaos of the colliding mundane thoughts of people in his vicinity. He certainly had special powers which were not harnessed. Do you think Ben that Luke may have been abducted and implanted? I'm normally not given to believe such stuff but I think alien intervention for Luke remains a possibility, for mental illness would not explain such strange phenomena.