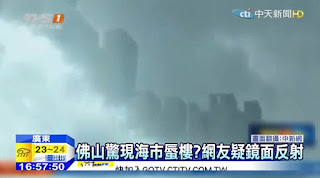 The residents of Foshan in were astonished a few days ago to look up and see a strange sight in the sky. A city appeared thousands of feet above them. The row of skyscrapers loomed over the edge of a cloud floating over Foshan. Thousands of people witnessed it and, naturally nowadays, some filmed it. The apparition was only visible for a few minutes then it vanished. This is not the first time has experienced this kind of mysterious vision. In 2011 an unknown urban landscape appeared in the mist-covered city of on the river Xin'an, see: https://www.youtube.com/watch?v=dsMmef04qGs. Scientists have commented that this is a fata morgana, an impressive form of mirage in which very distant objects can be seen in different places due to the refraction of light rays under certain atmospheric conditions, but is it? If so then this must be a real city somewhere a long way off; has anybody identified the skyscrapers in the image? There are other examples of weird country being seen in the sky that are specifically different from any known earth landscape. In fact one such incident was reported to the paranormal investigator Steve Mera. In 1943 a sailor on board a Royal Navy ship fighting in World War II saw something which is remarkably similar to what has been reported more recently in . He and his shipmates were sailing near when they saw a huge cityscape appear in bank of clouds which they watched for over three hours. He describes it as very beautiful, full of elegant buildings, roads, parkland and people moving about. The ship was a long way out at sea and no land was in sight; Steve believes that this was a fata morgana. However the witnesses did not recognize the place they were seeing and even describe it as old-fashioned, with a mixture of the familiar and the bizarre, see: http://www.blurb.co.uk/b/1176591-strange-happenings. Are these phenomena actually glimpses into physical domains beyond our own? Not extraterrestrial, but truly otherworldly? This topic forms a common theme in fiction, like Philip Pullman's enthralling His Dark Materials trilogy, see: http://hpanwo-tv.blogspot.co.uk/2011/09/gateway-to-parallel-universe.html. Could there be some reality behind it? Even mainstream scientists are taking the idea of parallel universes seriously; perhaps these universes not only exist, but sometimes merge briefly with our own. I doubt that this was a test of Project Blue Beam, if such an enterprise exists. The experimenters would be foolish to project their practice image over a populated area where lots of people could see it and maybe work out what was going on. They'd try it out in a remote and uninhabited region of the world. Source: http://www.dailymail.co.uk/sciencetech/article-3276576/Is-evidence-parallel-universe-Sightings-floating-city-China-simply-optical-illusion-say-scientists.html. A report of a "flying city" has also come from an isolated area of ; in this case the experience has a distinct UFO-like element to it, see: http://hpanwo-voice.blogspot.co.uk/2015/04/city-in-sky.html. Perhaps this is connected to the outbreaks of light spirals in the sky during recent years, like the Norwegian spiral. Maybe there's a connection with the recent new experiments with the Large Hadron Collider at CERN, see background links below.
See here for background: http://hpanwo-radio.blogspot.co.uk/2015/06/programme-142-podcast-cern-special.html.
And: http://hpanwo-tv.blogspot.co.uk/2015/07/cern-progress-or-apocalypse.html.
And: http://hpanwo-tv.blogspot.co.uk/2015/05/stargate-brighton.html.
Posted by Ben Emlyn-Jones at 18:29