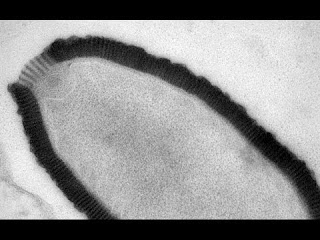 A team of French scientists have discovered a frozen virus in , that vast wilderness of enigma that I've talked about before, see: http://hpanwo.blogspot.co.uk/2007/12/russian-roswell.html. This virus has never been seen before and is not thought to exist anywhere on the Earth's surface; it was found a hundred feet below the ground in the northern permafrost. It was assumed to be dead, but as soon as it was thawed out, it sprang back to life... so begins the plot of several horror movies! However this virus, called Pithovirus sibericum, only infects amoebas, single-celled organisms. It poses no threat to human life, or any other animals and plants. It is enormous for a virus, fifty-nine microinches long. That sounds tiny; it's less than a quarter of the width of the thinnest human hair, but in viral terms it's a giant. It was last active thirty thousand years ago and since 1970 the permafrost in which it was stored has shrunk releasing much else from its natural time capsule. The scientists are worried that other viruses might emerge that are harmful. This retreat of the permafrost coincides with the arrival of large numbers of people in the region, oil company workers drilling for oil and gas. If they bore into the melting permafrost they might bring up far more than hydrocarbons. An ancient strain of smallpox could be one of the nasties freed from their cryogenic prison, or maybe even something never imagined before. (Source: http://www.bbc.co.uk/news/science-environment-26387276).

One of the best horror films ever made, in my view, is The Thing directed by John Carpenter. It tells the story of a deadly extraterrestrial organism that was buried in the ice of in the distant past. When scientists in the modern era melt the ice around it, the pathogen escapes and infects its human discoverers, with horrendous consequences. The scenario in The Thing in probably an extreme example of what might happen... I hope; nevertheless I agree with the French scientists that we should proceed cautiously. It's interesting how once again climate change caused by man-made Carbon™ emissions is crowbarred into the story; this is a tiresome inevitability nowadays, see here for more details: http://hpanwo-voice.blogspot.co.uk/2015/01/2015-and-climate-change.html. Zombies are once more at the forefront of my mind following my latest live performance of "Real Zombies" at the High Wycombe Paranormal Group last week; the recording of this is now online, see: http://hpanwo-voice.blogspot.co.uk/2015/10/zombies-fact-or-fiction.html. In the lecture I speculate about whether the zombie meme is actually a metaphor for something real, like a virus. Although I didn't mention it this time in the speech, it has struck me that zombies have a lot in common with viruses, especially when it comes to reproduction. Viruses are a completely different form of life to any other. Most eukaryotes- animals, plants and fungi, reproduce through sex; a male and female will produce a unique offspring that mixes both their DNA. Viruses don't do that. Instead they reproduce asexually by infecting the cells of another organism, termed the "host", and creating a copy of itself through that infection. Zombies do the very same thing; they create new zombies by biting a human being which subsequently transforms into a copy of themselves, a new zombie. I think it's sensible to take care in as the French scientists suggest, but I'm not terribly concerned by this news. As I say in "Real Zombies", I think we have far more to fear disease-wise from the hidden laboratories of the shadow government than we do a dripping chunk of ice from the Russian tundra.
Posted by Ben Emlyn-Jones at 16:33

WARHADI KALTIM said...
This comment has been removed by a blog administrator.
6 October 2015 at 03:44