CERN- Breaking Through the Veil 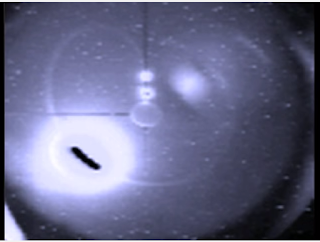 The Large Hadron Collider's current experiments, parochially named "Run 2", are about to reach their glorious apogee. I have been covering this subject for a long time; it's a long and complicated issue and if you're not familiar with it I recommend studying one or more of the background links at the bottom for more information. Since the spring of this year, the giant seventeen mile in circumference machine has been steadily building up its power. It is now colliding particles at thirteen TeV- tera electron-volts. This means that each of the miniscule nuclear protons, weighing just 10-700 of an ounce at rest, now has as much kinetic energy as a cargo ship. The universe has never experienced explosions this huge before. Even the Big Bang cannot match the environment in the heart of the LHC right now. Nobody knows what will happen as a result of this; those who pretend to are liars or fools. Next week Run 2 is set to enter a new phase in which the scientists hope to break through into a parallel universe. In the background links below I describe how potentially dangerous this is. They also say they wish to deliberately create what up till now they have described as merely a by-product: the dreaded mini black holes. These mini black holes will reveal to them whether, as the theory predicts, gravity in our universe is a part of our universe because it leaks in from another nearby in a higher spatial dimension. The current leader of the scientific team, Mir Faizal said: "We predict that gravity can leak into extra dimensions; and if it does, then miniature black holes can be produced at the LHC. Normally when people think of the multiverse, they think of the many-worlds interpretation of quantum mechanics, where every possibility is actualised. This cannot be tested and so it is philosophy and not science. This is not what we mean by parallel universes. What we mean is real universes in extra dimensions. As gravity can flow out of our universe into the extra dimensions, such a model can be tested by the detection of mini black holes at the LHC. We have calculated the energy at which we expect to detect these mini black holes in 'gravity's rainbow' which is a new hypothesis. If we do detect mini black holes at this energy, then we will know that both gravity's rainbow and extra dimensions are correct." According to one CERN-watcher, the LHC has perhaps already exposed parallel universes by creating a stargate which is visible in one of the photographs from inside the monster machine, reproduced above. This portal, if that's what it is, was spotted on September the 10th. In which case what will happen next week when the process is accelerated even more, see: https://www.youtube.com/watch?v=yZnsZPhonnI? Source: http://www.express.co.uk/news/world/565315/Scientists-at-Large-Hadron-Collider-hope-to-make-contact-with-PARALLEL-UNIVERSE-in-days.
See here for background: http://hpanwo-tv.blogspot.co.uk/2015/07/cern-progress-or-apocalypse.html.
And: http://hpanwo-radio.blogspot.co.uk/2015/06/programme-142-podcast-cern-special.html.
And: http://hpanwo-voice.blogspot.co.uk/2015/07/cern-discovers-pentagram-particle.html.
And: http://hpanwo-voice.blogspot.co.uk/2014/10/god-particle-doomsday.html.
Posted by Ben Emlyn-Jones at 18:35

Through the dimension rip in the LHC will come dreaded Turkish PPI and debt sales monsters like the poster above Ben, lol.