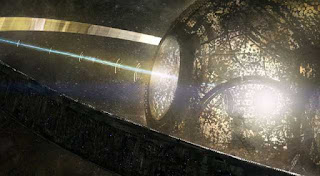 In December last year I wrote a post about an outwardly insignificant star with a catchy little name: KIC8462852. This star was emitting a strange light pattern that made scientists operating the Kepler Space Observatory very excited. It looked as if it was surrounded by structures that might be artificial.
See here for essential background: http://hpanwo-voice.blogspot.co.uk/2015/12/mysterious-stars-shows-signs-of-life.html.
All stars that have exoplanets change the way they emit light slightly over time; in fact it is through this method that exoplanets are often discovered. These changes of light are caused by the exoplanet transiting or eclipsing the star. This is always in regular periods as the exoplanet orbits its star in the same way the Earth and other planets do around the sun. However KIC8462852's light alteration is irregular; this is unheard of anywhere else in the universe. As I say in the background article, there are profiles of stars that might indicate the presence of an extraterrestrial civilization that have been theorized in advance by people like Freeman Dyson. An irregular light pulse could be a sign of giant artificial megastructures surrounding the star. Could these observations of KIC8462852 be our first discovery of a Dyson sphere?

In the initial post I promised an update as soon as one appeared. The most common "rational explanation" for KIC8462852's anomalous signature was that it is surrounded by a disk of comets that had been deposited in its orbit after it had suffered a near collision with another younger star. Since that proposal was made Dr Bradley Schaefer of has cast doubt on it. This is because both he and the original researcher, Dr Tabetha Boyajian, have gone through astronomical records of previous observations of KIC8462852 dating back over a century. KIC8462852, nicknamed "Tabby's Star" after Dr Boyajian, has been slowly dimming. Between 1890 and 1989 its random pulses have lost twenty percent of their average intensity. Schaefer worked out that if comets were responsible then over half a million comets, each a hundred and twenty-five miles across, must have entered the star's orbit within just a hundred years; impossible. Dr Schaefer does not accept the alien megastructure theory because he reckons that a Dyson sphere would not absorb radiation in the visible light part of the electromagnetic spectrum, but that's just anthropomorphizing. He's essentially saying: "If I built a megastructure I'd build it only to capture infrared radiation." How can we put ourselves in the aliens' shoes... apart from the fact they might not even have two feet like humans do... Maybe he's just scared of being labelled a loony. However he admits that the effect is probably caused by a single physical mechanism. Dr Boyajian agrees; "This presents some trouble for the comet hypothesis." she conceded. A SETI researcher, Doug Vakoch has announced that a radio-astronomical survey has found no "LGM" or "Wow!"-like signatures coming from Tabby's Star... or so they've told us. That's disappointing, but not conclusive. Again, this is anthropomorphizing. We don't know for certain that ET intelligences would beam organized radio patterns into space; they might not have the inclination even if they have the technology. All we know is that we do that. Source: http://finance.yahoo.com/news/bizarre-looking-star-just-got-210900508.html. So the mystery surrounding KIC8462852 continues and deepens. At the moment it has become one of the most watched stars in the universe. A plethora of telescopes are currently focused on it, waiting for its light to dip again. In the meantime, Dr Boyajian has given a TED Talk, see: https://www.youtube.com/watch?v=R19idXnG8lY. I've gone off TED, see: http://hpanwo-tv.blogspot.co.uk/2013/03/down-with-skeptocracy.html, but this one is worth watching. However it's very obvious that Dr Boyajian is exhibiting the same sense of rational self-preservation as her colleague Dr Schaefer. They're both only human after all. Her opening remark, before she even introduces her subject matter is: "Extraordinary claims require extraordinary evidence, and it is my job, my responsibility as an astronomer, to remind people that alien hypotheses should always be a last resort." This means: "I'm NOT a loony!... Got it!?" As I asked in the first post, why are alien hypotheses always the last resort? If you want to see KIC8462852 yourself you'll need at least a five inch telescope. It's an F-type main sequence star, which means it is very similar to the sun, albeit slightly bigger; but it's a very long way away, almost fifteen hundred light-years, so its light can't be seen by the naked eye. It is in the constellation of Cygnus close to the major highly visible stars of Deneb and Rukh. It's directly northeast of the star cluster NGC 6866.
See here for background: http://hpanwo-voice.blogspot.co.uk/2015/12/will-tim-peake-see-ufo.html.
And: http://hpanwo-voice.blogspot.co.uk/2012/11/bbc-blocks-brian-cox-over-alien-fears.html.
And: http://hpanwo-voice.blogspot.co.uk/2012/10/bbc-conspiracy-road-trip-ufos.html.
And: http://hpanwo-tv.blogspot.co.uk/2015/03/ufo-disclosure-2015-doubts-begin.html.
Posted by Ben Emlyn-Jones at 14:30