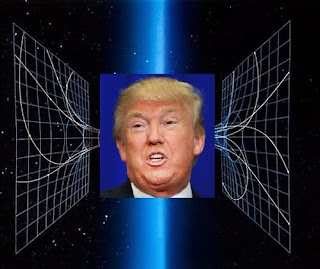 There have been some very strange stories coming out of the post- election turmoil, but none of them are as bizarre as the latest. I came across it on a video by one of my favourite YouTubers Dave Cullen, also known as "Computing Forever". There is a burgeoning concept floating round that the universe we're living in is an "alternate" one; although the word alternate is purely relative in this context. I think what they mean is we've moved out of the universe we're supposed to be in and into a "wrong" one. The reason for this is that Donald Trump is the president. The way this happened was some experiment that went wrong with the Large Hadron Collider at CERN... or did not go wrong and the damage was done on purpose, depending on your point of view. The evidence cited is the mysterious "Mandela Effect" in which people conflate the same falsehoods from the past together. I've addressed CERN and the Mandela Effect before; see the background links at the bottom. Dave makes a contemptuous joke out of this story and, to be honest, it is rather droll. Source: https://www.youtube.com/watch?v=o_zsv2sFa-4. However is it really beyond possibility? No. According to the many-worlds hypothesis of Hugh Everett III and other cosmologists in more recent years, it is not only possible, it is certain. The mainstream is starting to take it seriously now. The ultimate establishment flagship, BBC's Horizon, made a programme all about the hypothesis, see: http://www.dailymotion.com/video/x17qmgf_parallel-universes-bbc-horizon_tech. I have covered the issue myself numerous times, for example see: http://hpanwo-voice.blogspot.co.uk/2017/02/philip-pullman-new-book-and-film.html. This means that not only could there be a universe in which Donald Trump failed to become president, but there is; there has to be. And could CERN have had a hand in that process? Theoretically, yes. In fact I myself have experienced the Mandela Effect, as I explain in the background links. CERN have released a statement saying they deny this. Researchers who think we're stuck in the Trump-iverse table several other strange eventualities as evidence for it, such as the Chicago Cubs baseball team winning the sport's biggest tournament; something that they annually failed to before for a hundred years. Nevertheless, on a practical level I agree with Dave. The reason this weird meme has trended is that Trump's opponents are still in such shock and dismay that Trump won, that they're finding new and creative ways of staying in denial. As I've said before, the political events of 2016 are unprecedented in their novelty. Because of media propaganda, many left-wingers regard Trump as the political equivalent of the Antichrist and this is their Apocalypse. Who wouldn't want some escapism from that? In fact there's even a spoof website which covers news from a fictional universe in which Hillary Clinton is president. It's meant to be satirical of course, but it has been dropped into the unexpected role as an online safe space for the easily triggered, see: http://www.hillarybeattrump.org/. As for the Chicago Cubs it's simple, a century of training has paid off and they've finally got their game together. My own view, as I've detailed before, is that the election of Donald Trump to the White House is a good sign, not a bad one. In fact it is, along with Brexit, the best thing to happen in the political world during my lifetime. If there is a parallel dimension out there in which Hillary succeeded in slithering her way into the Oval Office, I'm bloody glad I'm not in it.
See here for background: http://hpanwo-voice.blogspot.co.uk/2017/01/coronation-of-god-emperor.html.
And: http://hpanwo-voice.blogspot.co.uk/2016/09/ive-got-mandela-effect.html.
And: http://hpanwo-radio.blogspot.co.uk/2015/06/programme-142-podcast-cern-special.html.
Posted by Ben Emlyn-Jones at 16:00