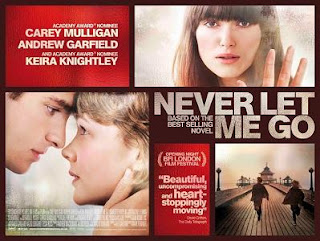 I'm going through a phase where I'm re-watching a lot of old films. I've been tempted to throw out some of my DVD collection because they're taking up too much space in my bedroom, but I'm glad I haven't. A few days ago I watched Eternal Sunshine of the Spotless Mind again for the first time in years, see: http://hpanwo-voice.blogspot.co.uk/2017/02/eternal-sunshine-of-spotless-mind.html, and last night I watched a romantic tragedy called Never Let Me Go, a 2010 movie based on a book by Kazuo Ishiguro, who is British by nationality, but I'm guessing by his name has Japanese roots. Trailer: https://www.youtube.com/watch?v=sXiRZhDEo8A. It stars Carey Mulligan, Keira Knightley and Andrew Garfield. At the start of the film the three central characters are played by children because the setting is a traditional English boarding school. There's a lot of intrigue during this act because it quickly becomes clear that there is something highly unusual about this school. The children have no parents. They have only single-letter surnames like "Kathy H", "Ruth C" and "Tommy D". They also have tags on their wrists which they have to scan against electronic locks every time they pass through a door. It is soon revealed that these children are all genetically modified clones. The setting is actually some kind of parallel universe. Most things in it are the same as our world, but there are a few important differences. Human cloning has been perfected and this has led to massive medical breakthroughs. The downside is that the clones at the school are necessary for those treatments and that it involves their vital organs being used for transplantation. This eventually and inevitably leads to their premature death after their third or fourth harvest, which is euphemistically termed "completion". Some clones "complete" on their first donation. Few of the clones survive beyond their early thirties. The school is an experiment into the medical ethics of the practice; they want to know exactly how close to natural humans the clones are, and the kids are made to draw pictures and write poetry to see if they "have a soul". This is a concept I'm familiar with because it is a part of the story in one of my favourite novels, Friday by Robert Heinlein, see: https://books.google.co.uk/books/about/Friday.html?id=e_4wKQAACAAJ&source=kp_cover&redir_esc=y. This is about a female secret agent of the future who is also a clone and has a very human side to her indeed, far more so than many of her natural born fellows. In the movie the viewer is left in no doubt that the answer the question is yes. The clones are portrayed exactly like normal humans, physically and mentally. In fact the central storyline involves a tragic love-triangle between the main characters. As their "completion" approaches the lovers struggle for more time on this earth (or that alternative one) to be together. What interests me is that it never occurs to the characters to refuse to donate their organs. There appears to be no coercion in the process; the clones are permitted to live normal lives in ordinary homes. Some even have cars and they interact with natural humans as equals. They're not imprisoned in camps and tied down to the operating tables, as is rumoured to happen in to political prisoners. So why do they never object? I suppose if they were all locked up and forced to donate their organs it would make it a less interesting story. The idea of parallel universes is a fascinating one and now even serious scientists are considering it. Is there a real universe out there, in the distant reaches of hyperspace, where the scenario in Never Let Me Go is really going on? Could the Illuminati be planning to access it with the Large Hadron Collider at CERN? The film gave me some strange dreams last night.
See here for more information: http://hpanwo-voice.blogspot.co.uk/2015/10/cern-breaking-through-veil.html.
And: http://hpanwo-voice.blogspot.co.uk/2015/10/sky-city-in-china.html.
And: http://hpanwo-tv.blogspot.co.uk/2015/05/stargate-brighton.html.
And: http://hpanwo-voice.blogspot.co.uk/2016/06/dovestone-man.html.
Posted by Ben Emlyn-Jones at 18:39