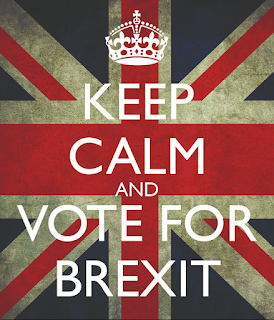 It's hard to think of something to write in this post that I have not written before, see background links below. After the underhand machinations of Mzzzzzzzz Gina Miller and her devious accomplices forced Parliament to vote on Brexit, they voted on it and it was passed 498 to 114. I knew this would happen because of the pre-emptive vote held in December. Miller and co's delaying tactic has failed, see: http://hpanwo-voice.blogspot.co.uk/2016/12/brexit-is-back.html. Does this mean that the Remoaners will finally understand that "Leave" means "Leave"? The government has published a white paper on its implementation of Article 50 that I'll have to study and report on in the future. The Prime Minster Theresa May is also heading for to discuss Brexit with the European Union Commission. There's apparently a "leaving fee" will have to pay of sixty billion Euros. I don't see why we can't just stick two fingers up to that and say "We're leaving and not paying!" If the EU wants to collect its fee they can come and get it. They will be met on the beach by a row of angry fully-armed Brits... and I'll be one of them! It's sad that 114 MP's didn't back the bill. I guessed a few of their names beforehand; David Lammy, Kenneth Clarke, Caroline Lucas. I urge all their constituents to vote them out at the next election. Source: http://www.bbc.co.uk/news/uk-politics-38836906. The new left has completely exposed itself in all its sordid decadence. Whether it's Bob Geldof sailing his millionaire's yacht into the path of fishing trawlers or Gina Miller trying to undermine the process by sneaky exploitation of the courts. The new left say they love democracy, and they do... when it's going their way. When it doesn't they replace it with dictatorship.
See here for additional background: http://hpanwo-voice.blogspot.co.uk/2017/01/brexit-will-be-rock-ard.html.
And: http://hpanwo-tv.blogspot.co.uk/2016/06/brexit-reality.html.
And: http://hpanwo-radio.blogspot.co.uk/2016/06/programme-193-podcast-eu-referendum.html.
And: http://hpanwo-tv.blogspot.co.uk/2016/04/david-camerons-leaflet.html.
Posted by Ben Emlyn-Jones at 19:35

I come from the same town as Geldof. Geldof grew up in a particularly nice part of town and still owns the house that I would estimate to be worth over 1.5 million Euros in today's money. I have come across the Geldof family, including a very nervous Peaches, now deceased sadly. My belief is that Geldof was hired by Thatcher, round the time of Live Aid, for MI5 to act to undermine and weaken Irish society into the cultural Marxist mess that it is today. In return, Geldof was given preferential treatment in obtaining contracts and became very wealthy as a result, ultimately being knighted and becoming a multi-millionaire. The deaths of two family members in less than opaque circumstances and Geldof's pro-Euro stunt could be seen in a different light if my theory is correct, such is the way the British secret service are known to treat their, "assets".

It wouldn't surprise me, Laurence. People with big egos tend to be easy to recruit as agents. All you do is feed their ego and they'll eat out of your hand.