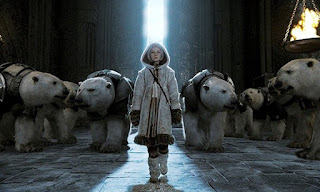 Because I watched Never Let Me Go the other night, see: http://hpanwo-voice.blogspot.co.uk/2017/02/never-let-me-go.html, parallel universes are at the forefront of my mind. Therefore it was inevitable that my thoughts would settle back on the greatest alternative universe story of all; The His Dark Materials trilogy by Philip Pullman and its associated spin-off novellas; Once upon a Time in the North and Lyra's Oxford. Beginning in a parallel universe version of my own hometown, these books enthralled me like no others. The first novel, The Northern Lights, was adapted into a troubled film production, The Golden Compass, see: http://hpanwo.blogspot.co.uk/2008/01/golden-compass.html. I enjoyed this film immensely, but I saw it before reading the book. Existing fans of the books are divided over it. It was a brave effort and it might have been better received if it wasn't for the organizational problems related to it, most notably the first director walking out halfway through and having to be speedily replaced with a newcomer. The ending of the movie is very abrupt and truncated, and it happens in the story long before the natural pause given by when he wrote The Northern Lights. I, along with all the books' fans I daresay, eagerly anticipated the release of the two sequel films of The Subtle Knife and The Amber Spyglass. Production was due to resume in 2007, during a decade when we'd seen the films of other fantasy books like Tolkien's Lord of the Rings and Lewis' Chronicles of Narnia. Nobody doubted His Dark Materials would be reproduced in full for the big screen too. However the studio cancelled the series after The Golden Compass missed its box office target. There may well have been political pressure put on them from the church in the because of the story's atheo-humanist themes. Materials are what Richard Dawkins would call "strident" books. However it has been revealed that the BBC plan to make a new television adaptation. They have called in Jane Tranter to produce, somebody I have written about before; but I've changed my mind considerably since penning this screed back in 2009. I'm willing to give the Beeb a chance, see: http://hpanwo.blogspot.co.uk/2009/01/new-doctor.html. Source: http://www.salon.com/2016/04/04/his_dark_materials_fans_rejoice_this_new_adaptation_could_actually_do_philip_pullmans_novels_justice/.

At the same time Philip Pullman has announced that 2017 will be the year of the publication of the first instalment in a new series of books set in the His Dark Materials universe... or universes. The Book of Dust is a project he's been mulling over for some time and he mentioned it soon after The Amber Spyglass came out. As a prose writer myself I know it is not always possible to put pen to paper in any way before thinking about the story for a long time. My latest book Roswell Rising- a Novel of Disclosure, is a rare exception. I came up with the idea almost instantly, see: http://hpanwo-bb.blogspot.co.uk/2016/08/roswell-rising-is-here.html. describes The Book of Dust not as a prequel or sequel, but an "equel", taking place over the same time period as Materials. It will include at least one of the Materials' characters, the heroine Lyra Belacqua; source: http://www.bbc.co.uk/news/uk-38978023. I will be in the queue outside the bookshop on launch day. It will probably be first released in Blackwells Oxford like all 's other books and hopefully I'll be able to get him to sign it. Despite my love of his writing, Philip Pullman is definitely not above my criticism; far from it. I am particularly bothered by his antipathy towards CS Lewis which is totally disproportionate and frankly obsessive. In Alister McGrath's new biography of Lewis, CS Lewis- a Life, he reports that says he was tempted to exhume Lewis's grave and throw stones at his corpse. Source: https://www.amazon.co.uk/C-S-Lewis-Eccentric-Reluctant/dp/1444745549. Philip, what has the man ever done wrong except write some books you don't like? also claims that in the Chronicles of Narnia book The Last Battle, Susan, a young female character was sent to hell for being interested in clothes and boys. I myself disliked this element of Lewis' plot, but 's statement is a gross misrepresentation of what really happened. considers Narnia religious propaganda, but it is no more that than his own books are non-religious propaganda. This is not the first time I've encountered such atheist and skeptic hypocrisy, see: http://hpanwo-tv.blogspot.co.uk/2016/07/skeptics-who-are-they-why-are-they.html. If only 's own books were not so magnificent, then he could become one of my figures of derision, perhaps even rivalling Prof. Brian Cox. I look forward to the new books and films enormously.
See here for more information: http://hpanwo-tv.blogspot.co.uk/2015/05/stargate-brighton.html.
And: http://hpanwo-tv.blogspot.co.uk/2011/09/gateway-to-parallel-universe.html.
And: http://hpanwo.blogspot.co.uk/2008/11/mist.html.
And: http://hpanwo.blogspot.co.uk/2008/09/flatland.html.
And: http://hpanwo-radio.blogspot.co.uk/2015/06/programme-142-podcast-cern-special.html.
Posted by Ben Emlyn-Jones at 17:17