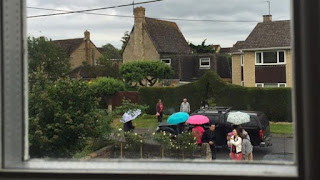 Kidlington is a small town situated a few miles north of . It is a busy and active place because it has two intercity roads running past it; and it is close to and railway station. In most other ways it is a fairly normal English town, certainly not on the tourist trail. This is what makes recent events there so strange. A large number of unusual people have been seen wandering around the Kidlington, especially in a residential area to the north of the town. and The Moors have been most severely affected. What happens is that during daylight hours a crowd of people enter the area; "coach loads" the witnesses say, but no vehicle has been seen transporting them. The people walk up and down the streets. They appear spellbound by this quite ordinary English suburban residential district. They take photographs and examine everything enthusiastically; lamp posts, fences, parked cars etc. Their behaviour can be intimidating and intrusive, and not that of holidaymakers on organized group tours. For instance they've entered private residences and sat on garden benches. They've knocked on people's doors and asked to use their toilets. They even offered to mow their lawns. The Facebook gossip group "Spotted Kidlington" has been collecting witness accounts, see: https://www.facebook.com/SpottedKidlington/?fref=ts. The people are described as racially "Chinese or Japanese". Most can't speak English, and those who can do so with difficultly and have strong foreign accents. They usually pay the local people no attention unless they're approaching them in the bizarre way I describe above. Their clothing depends on the weather; when it's raining they use cagoules and umbrellas. The case has been covered by mainstream media all over the world, but so far journalists have been unable to solve this mystery. Enquiries with travel agents have drawn a blank. There are a number of theories emerging. Some believe the people may have mistaken Kidlington for Stratford-upon-Avon, the home of William Shakespeare and one of the UK's biggest tourist destinations; although it is thirty miles away. They might also have got lost while visiting nearby , another major tourist attraction. Many countries of the enjoy British books and television programmes and Inspector Morse is a firm favourite in , and other neighbouring nations. It's possible that these people simply want to experience the beat of that fictional Oxfordshire detective. Then again, the way they come and go, and the lack of any documentary background to these visitors have led local people consider more outlandish possibilities. Somebody has suggested that this might be some form of social experiment. The people of Kidlington are being used as guinea pigs by psychologists on some kind of covert operation. Very sinister and not beyond possibility. See: http://www.bbc.co.uk/news/uk-england-oxfordshire-36733450. However there are also similarities between this case and some men-in-black encounters. Men-in-black often have a foreign racial appearance and speak with strange accents. They react with surprise to completely normal objects and situations. They appear and disappear apparently from nowhere. They behave in an obtrusive and even antisocial manner with humans they target. Obviously I can't answer these questions right now. Nevertheless there is no excuse for me not to investigate personally because this is going on just a short bus-ride from where I live, so I'll be heading to the location shortly with my HPANWO TV camera.
See here for more information: http://hpanwo-tv.blogspot.co.uk/2015/05/stargate-brighton.html.
And: http://hpanwo-voice.blogspot.co.uk/2014/10/black-eyed-kids-uk.html.
And: http://hpanwo-voice.blogspot.co.uk/2015/08/fallen-angel-found-in-london.html.
And: http://hpanwo-voice.blogspot.co.uk/2014/11/somerton-man.html.
And: http://hpanwo-voice.blogspot.co.uk/2012/11/derren-brown-apocalypse.html.
Posted by Ben Emlyn-Jones at 16:15

Interesting mildly amusing story that will be forgotten about by next week. Nothing to do with the MiB either.

Really, Beatty? Why not? I pose it as a possibility, not a certainty.

Everything could be possible just depends on what the odds are. Where you any good at statistics at school...oh don't worry! The MiB was a film, you do know that, don't you? Just like 1984 was a satirical novel. Ahem!

Oh and thanks for the mention on Monday, I did hear the crowd groan a little. You took my words right out of context though.