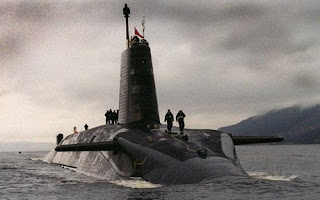 Parliament has voted to keep the 's independent nuclear deterrent. The bill was passed overwhelmingly, 472 to 117, see: http://www.bbc.co.uk/news/uk-politics-36830923. I have been covering this story for some time, see below.
See here for essential background: http://hpanwo-voice.blogspot.co.uk/2013/07/replacing-trident.html.
And: http://hpanwo-voice.blogspot.co.uk/2015/05/trident-submariner-speaks-out.html.
And: http://hpanwo-voice.blogspot.co.uk/2015/07/trident-is-just-for-show.html.
And: http://hpanwo-voice.blogspot.co.uk/2015/10/new-trident-contracts.html.
The vote was very partisan indeed with every single Tory MP backing nuclear weapons. The Greens, SNP and LibDems all unanimously opposed the motion. The only split party was Labour 140 for; 47 against, including the party leader Jeremy Corbyn. Over thirty-one billion pounds will now be raised to fund the renewal of the submarine-based nuclear deterrent system Trident; that's enough money to construct fifteen fully-equipped NHS general hospitals. The four aging Royal Navy Vanguard-class submarines will be replaced by a new fleet, codenamed: "Successor". The government has gone for the full works option and rejected cheaper more limited alternatives. Four vessels will be constructed which will be able to provide "CASD- Continuous At-Sea Deterrent". There will also be a new arsenal of missiles and all the support services; the construction of some of which are already underway, as I describe in the bottom of the background links above. I'm very disappointed by this decision. As I explain in detail in the background links, I'm opposed to the nuclear deterrent because it is dangerous, unnecessary, ineffective and overly-expensive.
Posted by Ben Emlyn-Jones at 16:25

Yes, I know how a nuclear weapon works, and there was a deal you wankshitter. The govt had proposals for a down-budget limited alternative to a CASD force. Three subs and partial coverage. Two subs on a standby status, or tactical short-range weapons in the strategic role launched from missile-armed SSGN's.