Kubrick's Daughter on the Moon Landings 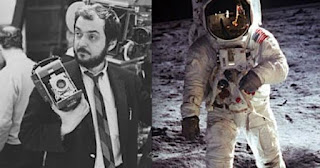 The forty-seventh anniversary of the Apollo 11 moon landing has brought the possibility of it being faked back into the public consciousness. A recent development in the run-up to the anniversary is the reignition of the idea that the hoaxed moon landing footage had been directed by Stanley Kubrick. I talk about this in detail in these background links.
See here for important background: http://hpanwo-voice.blogspot.co.uk/2015/12/kubrick-moon-hoax-confession.html.
And: http://hpanwo-voice.blogspot.co.uk/2016/01/moonwalkers.html.
This time the daughter of the famous film director has spoken out. Vivian Kubrick has written an open letter on the subject: 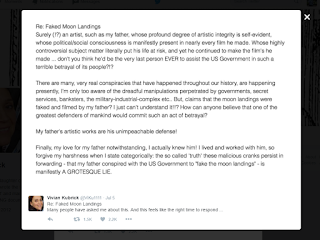 I actually think she makes some good points here. Why would Stanley Kubrick agree to such a dastardly and monumental lie against American citizens and the world? He was indeed renowned for his anti-establishment views, and he expresses them in many of his films. He was also good friends with the Russian film director Andrei Tarkovsky; this was during the Cold War when the Soviet regime in was at its prime. If you were the perpetrator of the conspiracy to fake the moon landings would you recruit somebody who you knew had a social conscience and was in contact with a Soviet celebrity? What's more there was also the possibility of him blowing the whistle very publicly. Somebody that famous with all that information would be a liability. His absence would also be noticed by the rest of the community while he was busy strutting around a studio at Area 51 yelling "ACTION!" No, far better to bring in somebody less-well known who would be ignored if he spoke out. What's more this nobody would make an equally small ripple if he "fell under a bus" one day. Together with the other points I raise in the background links, above and below, I doubt very much that Stanley Kubrick was the director of the fake moon landings. The most interesting thing about Vivian Kubrick's letter is not what she says, but what she doesn't say. She defends her later father robustly, but she does not comment on the general question of whether or not the moon landings were real. She just tells us her dad didn't do them. (source: http://www.independent.co.uk/arts-entertainment/films/news/stanley-kubrick-daughter-vivian-kubrick-apollo-11-moon-landing-conspiracy-theory-a7122186.html)
See here for additional background: http://hpanwo-radio.blogspot.co.uk/2016/03/programme-179-podcast-marcus-allen.html.
And: http://hpanwo-voice.blogspot.co.uk/2015/06/moon-hoax-progress.html.
Posted by Ben Emlyn-Jones at 17:19