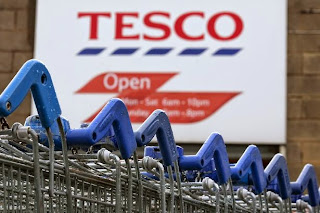 Some good news today; Tesco, that great Satan of the retail world, ended the last financial year more than 6.4 billion pounds gross in the red. Despite paying its workforce as little as possible and even creating three thousand "work experience" placements for the unemployed (see: http://hpanwo-voice.blogspot.co.uk/2015/02/cameron-pushes-workfare.html) the supermarket giant has entered a terrible financial crisis. These losses are its worst ever and one of the biggest in the corporate history of . The BBC's business correspondent Kamal Ahmed puts this down to a combination of factors all being exposed at the same time, a practice known as "kitchen sinking", see: http://www.bbc.co.uk/news/business-32411217. Apparently in sales revenue terms alone the chain is still operating at a 1.4 billion pound profit, which is still a reduction by 60% on 2013, but the value of its infrastructure has plummeted. The property value of its three thousand stores nationwide isn't worth a fraction of what it used to and Tesco already have plans to close forty-three of them.

I may be getting my hopes too high, but I can't help wondering if this is the effect of a lack of consumer confidence in a particular kind of way. The key words are in Mr Ahmed's blog where he writes: "...and shoppers turning away from larger out-of-town stores...". Does this means that shoppers have become aware of the greater economic consequences of their shopping habits and are starting to spend their money more ethically? Perhaps. In April last year, the beginning of the same financial year that crushed Tesco, I reported that the Nisa franchise had recorded a record-breaking ten percent rise in sales profits, see: http://hpanwo-voice.blogspot.co.uk/2014/04/nisa-to-see-you.html. Nisa are a chain of grocers run by independent cooperative small companies. They were specifically established to cater for the caring consumer. In its own words: "In 1977 we launched the National Independent Supermarket Association to protect the interests of independents against the insurgence of the national supermarket chains... The group grew dramatically over the next twenty years, attracting thousands of independent retailers to its membership... it expanded and pioneered central distribution to independent stores to provide them the same benefits as multiples. Today Nisa is a £1.43 billion turnover company which exists to provide benefits to its members, operating almost 2,500 retail stores, and provides every service that an independent needs to survive and grow in the grocery marketplace. Over the years, Nisa has ensured the prosperity of thousands of retailers and with its renewed focus on the consumer now seeks to provide greater means to achieve success..." Reading those words gives me a warm feeling inside. A while ago I made a film called New Tesco which was about how Tesco are trying to break into the urban cornershop market now that customers are turning away from the out-of-town superstores. A "Tesco Express" has opened up in , they demolished a two-hundred year old pub, to make room for it, and I was very worried that it might put the neighbouring Nisa shop out of business, see: http://hpanwo-tv.blogspot.co.uk/2013/12/new-tesco.html. The Tesco Express did open shortly after I made that film, yet now, more than eighteen months later, I'm happy to convey that the Abingdon Road Nisa branch remains open for business, see: http://www.nisalocally.co.uk/store/nisa-local-328-330-abingdon-rd-oxford. Tesco are striking back by cutting their prices and Mr Ahmed tells us ..."there is some evidence that customers are returning..." but for how long? Tesco will have to raise their prices to accommodate their current shortfall; they're just staving off the inevitable. If this story has emerged as the direct effect of customer choice then it will hopefully encourage other shoppers to join in. At the end of the day, it's up to us. Nobody is holding a gun to your head and forcing you to do your shopping in Tesco. I know there is enormous pressure for some people because of Tesco's low prices, but I myself have noticed little difference at the moment between Tesco and Nisa, and that difference will shrink even more as Tesco struggles to rebalance its books. And you'll be proactively helping because by using small local businesses you increase their profit margin and allow them to lower their own prices in response, so it's a role utilitarian situation that can form a positive feedback loop. This is what I mean when I say that nobody is helpless and that people do have political power even if they did not vote in the election... in fact especially if they did not vote in the election, see: http://hpanwo-voice.blogspot.co.uk/2015/05/general-election-result.html.
Posted by Ben Emlyn-Jones at 18:54

Thanks, Ben, for this post. I know plenty of people who feel the same way. As a family of four, we used to always do the 'big shop' on the weekend, dragging our two boys around the big Tesco for hours, and racking up a huge bill. I now shop local and daily, picking up just what we need for the next day. We save a fair bit of cash, we only eat what we really 'fancy' on the day, it's all fresh, we are far less wasteful and, of course, we have the warm glow of knowing we are helping to stab the corporate beast. We just heard that our local petrol station is being pulled down to make way for a Tesco Express. There are already 2 other TE's within a half mile radius. They won't get a penny from us! Just as you say, this is how we really vote, so vote daily.

Dear Ben. Thanks for the post as always. Indeed, it would be nice to think that society was beginning to counteract the culture of shopping as has existed the past decade. I restrained myself from taking any position contrary to this sentiment as I am aware of a few individuals shopping more locally and in the Nisa stores etc. My only concern is is that although stores like tesco hit these 'Bad Patches' historically what tends to happen is that they get swallowed up by larger conglomerates and so the totalitarian rubric still continues.

The NISA store format does seem to have had a positive effect in the way off offering a stake in a small business against the bigger store but I'm still a little uncertain about it because who are Nisa owned by?, is it just another large company that owns all these outlets that we are forced to work in under their own conditions?.

For example there were many local shops when I was young but independantly owned, now it seems that even the proverbial Asian corner shop MUST take on a Nisa/Spar franchise in order to have a viable business. Is this really progress?, I'm still on the fence Ben or is it the same ol' boss all over again just re-packaged differently?. Cheers Ben

Hi Neil. "Vote daily!" that's a great slogan :-) Well done for shopping ethically. I have tried to explain this to my family and they're not interested. Oddly enough they had the nerve to chide me for boycotting the election!

Hi X. i know I'm being optimistic here. I'm sure we havn't seen the last of Tesco. The Beast will not be slain in Hell so easily. Nisa's structure is different in the sense that it is not a chain of stores owned by a single large corporations, like Tesco, Aldi, Lidl, Morrisons etc. The shops are owned by the shopkeeper and he joins the Nisa franchise. If he wanted to he could leave the franchise and call his shop something else, but most benefit from Nisa membership and so do not. Nisa management itself is a company, but the shops are not directly a part of it. This is indeed progress in my view because it is essentially a workers' cooperative, a firm in which every employee is also an equal shareholder. It';s just like the People's Supermarket I describe in the background film. The Asian corner shop is different in that it tends not to be part of any franchise or sometimes it's a small local chain.

Hi Ben I stopped using Tesco a few months ago. instead we use the co-op, & a local farm shop. the quality of food is so much better, this is reflected in the price but you get what you pay for.
I didnt realise what NISA was as their is A shop 1/2 mile from our house which I may well start using
thanx for the info
Dave

Hi Ben. Just to clarify something (thanks for your reply). When I said that "the proverbial Asian corner shop MUST take on a Nisa/Spar franchise in order to have a viable business" I meant as in they must now Be part of a franchise such as Nisa in order to survive . Im sure that this is better than the Tesco domination etc but im just hopeful that even having to go int a 'Franchise' can also be one day overcome, we could ask why do we need to ascribe to a franchise in the first place in order to compete?perhaps as a temporary measure yes - but we should not have to do this in the first place. I hope it is a means to an end because a 'franchise' still has intrinsic connotations of a monopoly, perhaps not overtly but in terms of power and order under a business entity, which it ultimately is. It's positive steps though Ben, agreed. It has a very 'socialist' flavor to it, in a positive sense. Cheers