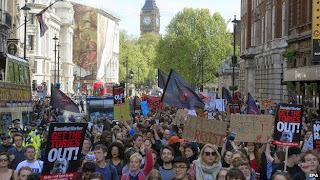 Yesterday was 's first full day under the new David Cameron Government plc following Thursday's general election. In response to this, hundreds of people took part in an unplanned protest in near the fortified junction with and outside the Conservative Party's headquarters. In Cardiff a similar demonstration broke out on Queen Street near the statue of Aneurin Bevan, the Welsh designer of the National Health Service; very apt. The local singer Charlotte Church was among them. The protesters were calling for an end to austerity and also electoral reform. The current electoral system allowed the Tories to win with only 37% of the votes; indeed Tony Blair once won with less than 30%, see: http://hpanwo-voice.blogspot.co.uk/2011/04/alternative-voting.html. What concerned me about this occurrence is that it was not reported on the BBC until the evening. It was covered in some newspapers, for example see: http://www.mirror.co.uk/news/uk-news/anti-tory-protests-live-updates-5670515. It was finally put on the BBC in the evening, see: http://www.bbc.co.uk/news/uk-32679827. The narrator in the video spot says: "The vast majority demonstrated peacefully", yet all the footage is of the small minority of rioters who did not. Why is that? We hear how seventeen were arrested and five policemen were hurt. Also we have the blasphemy against the "military religion" when a war memorial was defaced, and just before the 70th anniversary of the day of Victory in . All in all this gives such a powerful psychological impression on the viewer that anybody who says they attended that demonstration should be regarded as they were portrayed there in the news vid: "Nasty thugs!". This is a very slick piece of propaganda; delay covering the story at all and then present it in a distorted way. Is it any wonder people are angry? After everything we've had to put up with these last few years and Cameron is still in Number 10. Personally I don't think it makes much difference, see: http://hpanwo-voice.blogspot.co.uk/2015/05/general-election-result.html, but Cameron is still the public face of austerity, the bedroom tax, workfare, and everything else in these background links.
See here for background: http://hpanwo-voice.blogspot.co.uk/2014/12/austerity-did-you-really-think-it-would.html.
And: http://hpanwo-voice.blogspot.co.uk/2014/02/the-bedroom-tax-is-dead.html.
And: http://hpanwo-voice.blogspot.co.uk/2015/02/cameron-pushes-workfare.html.
Posted by Ben Emlyn-Jones at 18:15

As you know Ben, in this field of ours, namely: the Truth-Alternative & non conformist these topics intermingle and reveal many other wrongs in the world and are intimately connected. This post reminds me of when I was in London last year and literally thousands & thousands of people marched against 'Austerity'(Tm) and the Dismantling of the NHS. When I went home nobody reported it on the mainstream news, no T.V Time and just a couple of none-consequential 2 stanza Internet posts. This fractional media presentation is totally engineered as you know Ben. They do this because they know that although the story is in the ether, most people (perhaps as much as 90+% just consume surface level information and because of peoples society is allowed to operate within this shallow and highly orchestrated fix.

Today I have sat through a disturbing NHS Coarse that innocently is framed within the title of 'Abuse and the protection and provention for children and vunerable Adults'. It was 'Agenda 21' all the way Ben. More than this it focused again on Asian Grooming of Minors, no mention of Political and Institutional Abuse but exactly as your post mentions just pinning certain tags as Abuse onto all specific groups except those that are related to the establishment.

The last disturbing thing was the mention of 'Non Violent Extremism'as Abuse, it seemed to be aimed at 'bad parents' teaching their children ideas that are not within the dictated acceptability of these multi agency groups and how staff should instantly phone one of the multiple agencies (including the non NHS Team provided by the coarse) social services and a multitude of other private third party groups that seem to have latched onto the NHS recently incase young 'vunerable' adults and children are being taught 'extreme' information!. What does this mean?? Cameron has mentioned this non-violent extremism and I think this is part of the plan to make any anti-conformist, anti-establishment thoughts and information sharing 'extremist'.

What struck me was that it was not a 'Muslim' aimed video although there were a couple of shots of the proverbial long bearded man giving advice to 'the brown audiance', however most was shots of police walking around council estates talking about young everyday lads.

This type of one-sided opportunism is dangerous and fullfilling a clear agenda, as the non reporting of marches etc although as usual I was the only one to pick up on this, unless one or two others did but remained silent.....which I sadly doubt?