My Last Word on the Roswell Slides 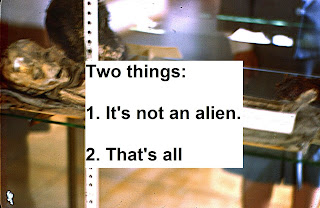 It's over. There is now no doubt at all and the case is closed. The creature depicted in the Roswell Slides is the mummy of a two-year old boy produced by the ancient Mesa Verde civilization, a culture which emerged in New Mexico and its surrounds over three thousand years ago. It is not an alien body. It is 100% human and 100% terrestrial. Moves are afoot to see if the actual mummy can be found again. It might still be on display somewhere or in storage at a museum, in which case with any luck we can get a modern photograph of it; it probably still looks the same. Then again it might have been given to the Pueblo Indians, the modern descendents of the Mesa Verde people, for burial. After Anthony Bragalia's confession, see background links, Don Schmitt has followed suit. He was one of the principle original spokesmen for the Roswell Slides' promoters. See:

"From Don Schmitt:
'It would seem like I've been here before... Asking my friends and colleagues to accept my sincerest apology for my participation in the recent event in . I accept full responsibility for the fact that I allowed myself to be drawn into this situation, albeit with the best of intentions, I sacrificed my better judgement by being overly trusting when I should have known better. As one strives to make up for the mistakes of the past, there are times that emotions cause one to outrun their headlights. In my case, I ran it right off the road. Through the years I have worked hard to earn back your respect and confidence in my work only to presently jeopardize it all. For that I am especially remorseful. I am afraid that after spending almost half of my life devoted to one specific investigation, I allowed the allure of final resolution cloud my skeptical nature to be replaced by a false vision of hope. I now realize that the image in the slides is a mummy as specified by the display placard. At this time I consider the matter concluded and intend on moving forward. My only desire is that you try to understand that I never wilfully did anything to mislead or misrepresent what I thought was the truth and I only acted with the best of objectives. Still, if I have offended or hurt anyone through my participation in this event, you have my deepest apology and have every right to hold it against me. When the truth finally was made known to all of us, I realized that I could only blame myself for not only failing you, but more sadly, failing myself. I must do better. And with God's help and your understanding, I promise I will.
Sincerely,
Donald R. Schmitt'."
That's a very dignified, honest and noble thing he's said and I wish Don all the best. I hope he can move on and rebuild his life after this disaster. People who denounced the slides from day one, like Philip Mantle and Kevin Randle, have been completely vindicated. Here's a radio show with both of them: https://www.youtube.com/watch?v=BoDF0OcTY_o. At the time I thought they were being excessively cynical, but obviously their attitude was justified in the light of subsequent events.

During the weeks leading up to the Be Witness pageant in I became somewhat obsessed with the Roswell Slides, see the background links below. I took a very similar line to Richard Dolan, I was enthusiastic just in case they were the real deal, but never let go of the possibility that the slides might not be extraterrestrial. I don't regret anything I've done; it's easy for anyone to repudiate previous actions with retrospect. However I think I addressed the possibility in a positive and level headed way. It was a bit of a gamble, like getting on a ship. The ship might sail away and sink with you on it, yet it might sail to a beautiful new world and leave you standing on the quay. The UFO community is right now resonating with the sound of questions: "How!?"... "Who!?"... "Why!?"... The "how" questions are ones I'll have to leave for another day; not all the information thereof has come out yet. As for the "who", I'm also not going to comment at present. Lots of fingers are pointing right now, but I don't know who is to blame for this. Clearly some people got involved without intending any harm and were perhaps misled by others who were deliberate deceivers, for whatever purpose. Perhaps when more information comes to light we'll know the answers. As for the "why", I do speculate, especially in Programme 9 of The Poker, see background links below, and in an upcoming UFO Truth magazine article, that this could be an attempt at disinformation. If so then we can only try to break through it with our own information. The Roswell Slides will not go away; we have yet to experience the full Skeptic backlash. Right now though I want to leave this train wreck behind me and move on; I'm not alone there. So I hope sincerely that this will be my last word on the matter.
See here for background: http://hpanwo-radio.blogspot.co.uk/2015/05/the-poker-programme-9.html.
And: http://hpanwo-tv.blogspot.co.uk/2015/05/ufo-disclosure-2015-roswell-slides.html.
And: http://hpanwo-voice.blogspot.co.uk/2015/05/roswell-slides-day.html.
And: http://hpanwo-radio.blogspot.co.uk/2015/05/programme-136-podcast-roswell-slides.html.
Posted by Ben Emlyn-Jones at 18:04

Hiya Ben, on your rumination there about this being disinfo, remember me mentioning that this could - just might - have been a very elaborate ruse to belittle the WHOLE ufo community? If so, is Maussan et al on the payroll? This would befit the elaborate disinfo campaigns the powers could concoct.

Hi Tino, I've exchanged emails with Maussan and he came across as an honest chap. I hope not. I think he's somewhat over-enthusiastic and not discerning enoug. It's probably not necessary to pay him.

Hi Ben, I recommend this article, on debunking the infamous BeWitness hoax/scam! Cheers