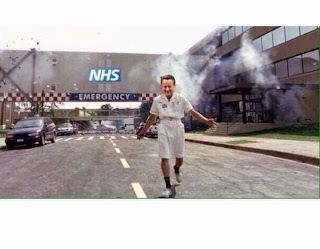 I put a bet on the general election; that a government stooge of some kind would win. The bookmaker offered me odds of 1-1. I won my bet. I've made an effort to avoid writing too much about the 2015 UK General Election™, but of course it is unavoidable; see background links at the bottom. Last night somebody asked me if I'd voted. I answered instinctively "yes"; but as soon as the words were out of my mouth I regretted it. Why did I lie? I chided myself for my dishonesty and cowardice. I think this was to do with a particular event I was at which I'll write about shortly. In fact the first and last time I ever voted in a general election was in 1997 when I voted Labour, for Tony Blair... No, I'm not proud of myself either. This time, contrary to the opinion polls which predicted a hung parliament, the Conservatives gained a majority. David Cameron remains prime minister and will now select a cabinet from his own party alone. The Tory victory was mostly at the expense of Labour, especially in where Labour crashed out completely; they now hold just one seat in . This means that apart from that and Clydesdale, the Scottish National Party have a virtual monopoly of power north of the border. It also demonstrates how had been propping up Labour all that time. It was very sad to see Labour supporters like the comic Jo Brand begging people to vote Labour because she wanted to "save the NHS!" In truth the policies that have devastated the NHS have been instituted by both Conservative and Labour governments and the ones during the last Labour term, the Blair-Brown one, were far more destructive than anything the Tories could come up with if they all downed speed, see: http://hpanwo-hpwa.blogspot.co.uk/2014/07/allyson-pollock-at-tedx.html.

British elections always work the same way. There is just a single day to vote, called "polling day" and the electorate vote by putting a cross on a piece of paper. This in itself is sinister because the cross is traditionally the signature of the illiterate, the serf, the fool. The count begins on polling day as soon as the polls close at about . This means that the vote-counters work through the night. Why not wait until the next day and count the votes then? Because as I've written about before, it is unnatural for humans to be awake and night and we are always drowsy, more suggestible and lose alertness, see: http://hpanwo-hpwa.blogspot.co.uk/2014/11/shiftwork-health-risks.html. Therefore any tampering with the count for the purposes of rigging the election becomes much easier. This definitely happened with the Scottish referendum last year, see: https://www.youtube.com/watch?v=MZRYVE4naHc. It will also happen with the long-awaited much-promised EU referendum Cameron has agreed to, see: http://hpanwo-voice.blogspot.co.uk/2013/01/david-camerons-eu-referendum.html. Remember that elections are completely unmonitored. The various international bodies that manage new elections in fledgling democracies are not thought to be needed in the land of the "mother of Parliaments". There will be no significant changes to the lives of British people because of the outcome of this general election. The "men in grey suits" make the decisions and they have contingency plans for any electoral result. Children will go on being abused no matter how you voted. UFO's, the paranormal and free energy will remain highly classified no matter how you voted. False flag terrorist attacks will continue no matter how you voted. Chemtrails, geoengineering, GM food and designer viruses will continue to spread no matter how you voted. Ian R Crane did a talk in last week which was part of his Apathy Kills tour. I didn't realize until I'd seen it that for Ian "apathy" means not voting; in that sense he makes a similar point to Thomas G Clark, Another Angry Voice, see background links below. Ian's show was excellent and I'm still a big supporter of his; however this is something we totally disagree on. How can we effect change by participating in a fraudulent and illusory system designed to keep the real power brokers hidden? Indeed, they established this system for the direct purpose of fooling ordinary people into thinking we had political power when we have none within it. In fact people do have political power outside it, an infinite quantity in fact; but we can only wield it by understanding the real rules of the game and exposing the real culprits behind the troubles we're facing in the world today.
See here for background: http://hpanwo-voice.blogspot.co.uk/2015/04/not-voting-reply-to-thomas-g-clark.html.
And: http://hpanwo-voice.blogspot.co.uk/2015/04/electioneering.html.
And: http://hpanwo-voice.blogspot.co.uk/2015/03/the-budget-2015.html.
Posted by Ben Emlyn-Jones at 18:08

Glad you managed to force yourself to comment on the election.

People asked me at the hospital when I went to work "What did you think of the election winner". Of coarse, I did not know because I did not watch the election 'show' neither did I vote. I wholeheartedly agree with you when you say:

"How can we effect change by participating in a fraudulent and illusory system designed to keep the real power brokers hidden?"

I've been presented with this argument over and over, people saying that Voting is a democratic right so I should vote to exercise it, but this is facile as you know Ben. This is like voting for pinocchio when I can clearly see Mastro Geppetto pulling the strings!. Even if you voted 'none of the above' what difference does that make except another tree felled for a placibo? It would just mean that it would be less hasstle for the men in grey suits to have their continuum flow with relative ease. Even voting for an 'outsider' is just picking the best of a bad bunch which is a waste of time. The root of the tree of democracy is poisoned and it is only when it is totally dug out that we can deserve to band around the term 'Democracy'.

Cameron 'won' - does not mean anything to me, it just means that his pals will get to keep their paycheques and positions as opposed to another party. Behind the facade the real politics is going on, a facade which we are denied access behind by this pathetic excuse for democracy we all voted for last night.......well........except myself and Ben at least.

X, it wasn't easy.
Yes indeed, X. A piece of counterfeit good doesn't magically transform into the real McCoy just because you pay a higher price for it? Yes, save the paper and save the trees.